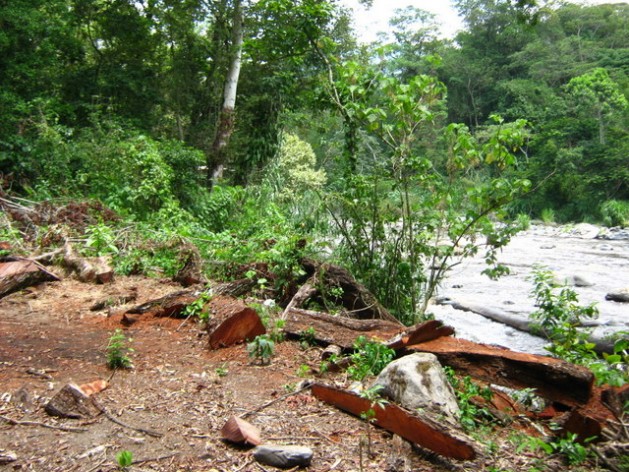 Trees on the bank of the Blanco river that have been felled to make way for a power plant. Hydroelectric projects are threatening biodiversity and the way of life of communities in the state of Veracruz, in southeast Mexico. Credit: Courtesy of Comité de Defensa Libre

MEXICO CITY, Sep 15 2014 (IPS) - Since January, villagers and townspeople near the Los Pescados river in southeast Mexico have been blocking the construction of a dam, part of a multi-purpose project to supply potable water to Xalapa, the capital of the state of Veracruz.

“Our rights to a pollution-free life, to decide where and how we live, to information, to free, prior and informed consultation, are being infringed. We don’t want our territory to just be invaded like this any more,” Gabriela Maciel, an activist with the Pueblos Unidos de la Cuenca Antigua por Ríos Libres (PUCARL – Peoples of La Antigua Basin United For Free Rivers), told IPS.

PUCARL is made up of residents from 43 communities in 12 municipalities within the La Antigua river basin. Together with other organisations, it succeeded in achieving a suspension of work on the dam that was being built near Jalcomulco by Odebrecht, a Brazilian company, and the State of Veracruz Water Commission.

The dam has a planned capacity of 130 million cubic metres, a reservoir surface area of 4.13 square kilometres and a cost of over 400 million dollars. It is one of more than a hundred dams planned by federal and state governments, which are causing conflict with local communities.

Infrastructure building on a vast scale is under way in Mexico as part of the country’s energy reform. The definitive legal framework for this was enacted Aug. 11, opening up electricity generation and sales, as well as oil and gas extraction, refining, distribution and retailing, to participation by the domestic and foreign private sectors.

Nine new laws were created and another 12 were amended, implementing the historic constitutional reform that was promulgated Dec. 20.

“Fossil fuels should not be given greater priority than a healthy environment. Zoning should be carried out, where possible, to indicate areas for exploitation and to establish constraints." -- Manuel Llano

The new energy framework is expected to attract dizzying sums in investments from national and international sources to Mexico, the second largest economy in Latin America, during the four-year period 2015-2018, according to official forecasts.

On Aug. 18 the Federal Electricity Commission (CFE) announced 16 investment projects worth 4.9 billion dollars. Of this total, 27 percent is for public projects and 73 percent is earmarked for the private sector.

In the framework of the 2014-2018 National Infrastructure Programme (PNI), the CFE is planning 138 projects for a total of 46 billion dollars, including hydroelectric, wind, solar and geothermal energy generation plants, transmission lines and power distribution networks.

“Environmental and social legislation has been undermined in order to attract investment. Laws guaranteeing peoples’ rights and land rights have been weakened. This heightens the risk of a flare-up of social and environmental conflicts. It is a backward step,” Mariana González, a researcher on transparency and accountability for Centro de Análisis Fundar, an analysis and research centre, told IPS.

State oil company Petróleos Mexicanos (PEMEX) is programmed to carry out 124 projects as part of the PNI, totalling over 253 billion dollars. They include gas pipelines, improvements to refineries, energy efficiency measures at oil installations and oil exploration and extraction projects, among others.

The majority of the planned investments are slated for the southeastern state of Campeche, where 43 billion dollars will be spent on the exploitation and maintenance of four offshore oilfields.

In second place is the adjacent state of Tabasco, with projects amounting to nearly 15 billion dollars for shallow water oilfields and for the construction and remodelling of oil installations.

In Veracruz, PEMEX is planning investments of 11 billion dollars in shallow water offshore reserves and building and modernising oil installations, while in the northeastern state of

On Aug. 13, the Energy ministry (SENER) determined Round Zero (R-0) allocations, assigning PEMEX the rights to 120 oilfields, equivalent to 71 percent of national oil production which is to remain under state control.

PEMEX was also awarded 73 percent of gas production in R-0.

For Round One (R-1) concessions, SENER called for tenders from private operators for 109 oil and gas exploration blocks and 60 production blocks.

The government estimates the investment required for these projects at 8.52 billion dollars between 2015 and 2018, for exploration and extraction in deep and shallow waters, land-based oilfields and unconventional fossil fuels like shale gas.

The National Hydrocarbons Commission (CNH), the industry regulator, is preparing the terms for the concessions. Contracts will be assigned between May and September 2015.

Manuel Llano, technical coordinator for Conservación Humana, an NGO, cross-referenced maps of the detailed areas involved in Round Zero and Round One with protected natural areas, indigenous peoples’ and community territories.

The lands affected by R-0 overlap with 1,899 out of the country’s 32,000 farming communities. R-1 areas affect another 671 community territories, representing 4,416 square kilometres of collectively owned land.

“It’s hard to say exactly which places will be worst affected. There could be a great deal of damage in a very small area. It depends on the particular situation in each case. I can make reasonable estimates about what might occur in a specific concession area, but not in all of them,” Llano said.

The new Hydrocarbons Law leaves land owners no option but to reach agreement with PEMEX or the private licensed operators over the occupation of their land, or accept a judicial ruling if agreement cannot be reached.

“The institutions have not carried out their work correctly. We know how the government apparatus works to get what it wants. We will oppose the approval of concessions and they will not succeed. We will continue our struggle. We are not alone; other peoples have the same problems,” said Maciel, the PUCARL activist.

Since March, several social organisations have taken collective legal action against government agencies for authorising the dam on La Antigua river and its environmental consequences. Los Pescados river is a tributary of La Antigua.

Between 2009 and 2013, SEMARNAT, the Environment and Natural Resources ministry, gave the green light to 12 hydroelectric and mini-hydropower plants on rivers in Veracruz. Construction has not yet begun on these projects.

Llano intends to compare maps of oil and gas reserves with the concession areas and contracts that are granted, in order to locate the potential resources claimed by the government and identify whether they match the bids at auction.

“Fossil fuels should not be given greater priority than a healthy environment. Zoning should be carried out, where possible, to indicate areas for exploitation and to establish constraints,” he said.
Edited by Estrella Gutiérrez/Translated by Valerie Dee