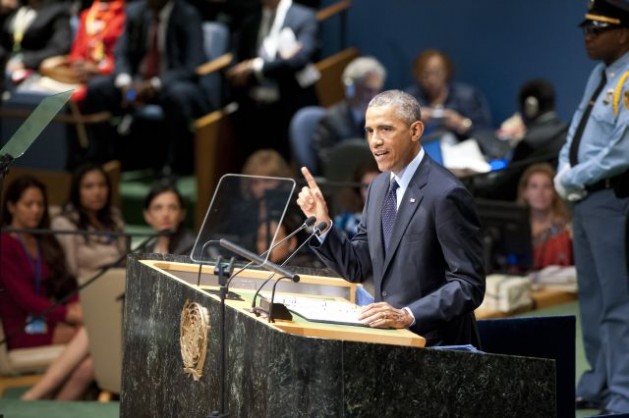 WASHINGTON, Sep 24 2014 (IPS) - All international development assistance and investments from the United States will now be required to take into account the potential impacts of climate change, according to a new rule signed Tuesday by President Barack Obama.

When designing development programmes of any type, federal agencies will need to factor in climate resilience, referring to the ability of a host country or community to anticipate and prepare for global warming-related changes. Those agencies will likewise be required to encourage similar planning by multilateral development institutions.

“Climate resilience is of critical importance to the 500 million smallholder farmers that provide the majority of food in developing countries.” -- Frank Rijsberman, CEO of the CGIAR Consortium

“The president is setting the right course with his executive order,” Jennifer Morgan, director of the climate and energy programmes at the World Resources Institute, a think tank here, said in a statement. “We can’t pursue development around the world without recognising the risks that climate change poses every day.”

President Obama announced the new directive at the opening of a United Nations summit on climate that brought together some 120 heads of state to discuss new commitments. There, the president also announced a suite of new “tools” and initiatives aimed at assisting developing countries prepare for the impacts of a changing climate, particularly around the sharing of scientific and weather data.

“And I’m announcing a new effort to deploy the unique scientific and technological capabilities of the United States, from climate data to early-warning systems … to help vulnerable nations better prepare for weather-related disasters, and better plan for long-term threats like steadily rising seas.”

The president did not announce a new U.S. carbon emissions-reduction target during Tuesday’s highly anticipated address. However, he did pledge that such a target would be made public by early next year.

Acknowledging that those countries that bear the least responsibility for climate change “often stand to lose the most”, Obama noted that U.S. assistance for climate-related adaptation efforts has expanded eightfold since 2009.

In an executive order detailing the new mandates, also signed Tuesday, Obama warns that failure to take into account the potential impacts of climate change could “roll back decades of progress in reducing poverty and improving economic growth in vulnerable countries” and weaken the overall effectiveness of U.S. development assistance.

“Development investments in areas as diverse as eradicating malaria, building hydropower facilities, improving agricultural yields, and developing transportation systems will not be effective in the long term if they do not account for impacts such as shifting ranges of disease-carrying mosquitoes, changing water availability, or rising sea levels,” a White House fact sheet notes.

The new mandate could mean, for instance, ensuring that a new road built with U.S. assistance is engineered and sited to withstand strengthened flooding, or that a planned school is moved out of the way of forecasted rising sea waters. It could also mean increased aid focus on agricultural seeds and techniques able to withstand weather extremes, as well as data to allow for better planning by farmers.

“Climate resilience is of critical importance to the 500 million smallholder farmers that provide the majority of food in developing countries,” Frank Rijsberman, the CEO of the CGIAR Consortium, a global organisation that promotes agricultural research to advance food security, told IPS.

“It is an important step for the U.S. to announce that it will mainstream climate resilience in all its development investments – as did a number of other countries and multilateral organisations at the summit.”

A new working group, led by the heads of the U.S. Treasury and USAID, the country’s main foreign aid agency, will now come up with guidelines for integrating these considerations into federal strategies.

But U.S. development agencies are already expressing excitement about the new requirements. An official with USAID told IPS that “it is essential that, as the world’s leading development agency, USAID continue to set a high bar for building resilience into all efforts to end extreme poverty and build flourishing societies.”

“OPIC is eager to take part in this administration-wide action that underscores the seriousness of the challenge the whole world faces from a changing climate,” Charles Stadtlander, an OPIC spokesperson, told IPS. “If one thing is clear, it’s more cost-effective to act now than to wait until after it’s too late.”

In recent years, OPIC has been increasingly lauded by environmentalists and development groups for its overseas investments in renewable energies. Last year, Stadtlander says, those commitments topped 1.2 billion dollars, marking more than a 50-fold increase since 2007.

For some, it is expanding such efforts, and the U.S. government’s still-nascent focus on overseas alternative and low-carbon energy sources, that remains of paramount importance.

“An important element of this order is the mandate to continue seeking avenues for mitigation and low-carbon development,” Justin Guay, a Washington representative for the Sierra Club, a conservation and advocacy group, told IPS.

“Already important initiatives like OPIC’s Africa Clean Energy Finance programme are building a pipeline, and new loan guarantees and the private investment they’ll leverage can take that pipeline to scale.”

Guay points to a new U.S. government project, announced this summer, called Beyond the Grid, aimed at expanding renewable energies in Africa. Strengthening that initiative would now offer a key opportunity to put the executive order’s mitigation mandate into action, Guay notes.

Meanwhile, others are expressing concerns over the impact in developing countries of new resilience assistance from the West.

For instance, while President Obama and others on Tuesday inaugurated a new Global Alliance for Climate-Smart Agriculture, aimed at addressing food security in the context of a changing climate, some farmers in developing countries worry the initiative will increase their dependence on foreign interventions.