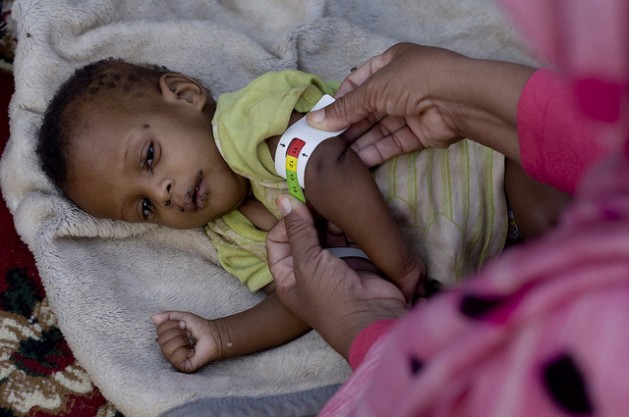 A nutritionist assesses the health of a child in the Sahel. Red indicates severe malnutrition. Credit: Kristin Palitza/IPS

JOHANNESBURG, Sep 24 2014 (IPS) - Eric Turyasingura chases after a ball made from plastic bags outside his mud-brick home in the mountains of southern Uganda.

The fame of the English soccer club has reached even his little ears. Pretending to be a sports star offers a moment of escape from his daily struggles.

At five years old, Eric’s tiny body already tells a story of poverty and lost opportunity. He is six inches shorter than he should be for his age. His arms and legs are pencil-thin and his head is out of proportion to his body.

Because he is stunted, experts say his chances growing up healthy, learning at full potential, and getting a job, let alone play professional soccer, have been greatly diminished.

In 2013, a United Nations Report said one in four children under five years, across the world – a total of 165 million – were stunted, while last year The Lancet estimated that undernutrition contributed 45 percent of all under-5 deaths.

Often beginning in the womb as poverty-stricken mothers live hand-to-mouth, stunting can be a lifelong affliction. Studies show it is linked to poor cognition and educational performance, low adult wages and lost productivity. A stunted child is nearly five times more likely to die from diarrhoea than a non-stunted child because of the physiological changes in a stunted body.

Development agencies say significant progress has been made in ensuring children are properly nourished, and as a result, the incidence of stunting is declining.

However, huge challenges remain and in sub-Saharan Africa, the proportion of stunted under-fives is two in five. With crises in South Sudan, the Central African Republic, Syria and now Iraq displacing millions of people, combating hunger and ensuring stunting rates don’t creep back up has become a top priority.

“We will not eliminate extreme poverty or achieve sustainable development without adequate food and nutrition for all,” said U.N. Secretary General Ban Ki Moon at a meeting of global hunger agencies in Rome.

“We cannot know peace or security if one in eight people are hungry.”

As such, the first “pillar” of Secretary General’s “Zero Hunger Challenge” aims to eliminate stunting in children under two years old.

The United Nations Children’s Fund (UNICEF) is also a partner in the Scaling Up Nutrition (SUN) Movement, another major global push, bringing together more than 50 countries in an effort put national policies in place and implement programme with shared nutrition goals.

One innovative programme – the Africa Nutrition Security Partnership, being implemented by UNICEF and funded by the European Union since 2011- is combating stunting both at the community level and the institution level.

Acutely malnourished children at risk of death are directed to health clinics, and at the same time health institutions and partners are given the tools they need to improve infant and young child feeding practices and hygiene, and better fight hunger and disease. The four-year programme focuses on Ethiopia (with a stunting rate of 44 percent), Uganda (33 percent), Mali (38 percent) and Burkina Faso (35 percent).

The aim is to change behaviour among households, set up systems for effective multisectoral approaches and increase government capacity, enabling these countries to battle against the effects of hunger long after the programme is complete.

In Uganda, for example, community workers have been provided with smart phones, programmed with information about hygiene, postnatal care and proper infant and maternal diet. The workers share the information with household members and then log their location on the smart phone’s GPS to prove they were there.

In Mali’s capital, Bamako, funding has been provided to broaden a master’s degree to provide advanced training to healthcare professionals about how to best design and implements nutrition programmes.

In Ethiopia, schoolgirls are being encouraged to delay marriage and pregnancy until they are at least 18, as a way of preventing intergenerational undernutrition. Older women are better able to carry a baby and rear children with stronger bodies and minds.

Moreover, tipping the balance in favour of a child’s future isn’t as hard as some might think. The simple act of reinforcing the importance of exclusively breastfeeding a baby for the first six months of his or her life, for example, increases an infant’s chances of survival by six times.

Most of the regions where the partnership is being run have ample food to go around. It is other factors, such as failing to properly wash and dry utensils after meals, selling nutritious homegrown foods at market rather than eating them, and cultural sensitivities to things like vegetables and eggs that are causing problems. As such, simply education programmes can make a real difference and save countless lives.

The other challenge is ensuring there is enough political will to keep those programmes running. If the international community remains focused, the downward trend in stunting will continue. It could only be a few short years before children from modest African communities like the mountains of southern Uganda get to really play for teams like Arsenal. Children just need to be allowed to grow to their full potential and good things will follow.