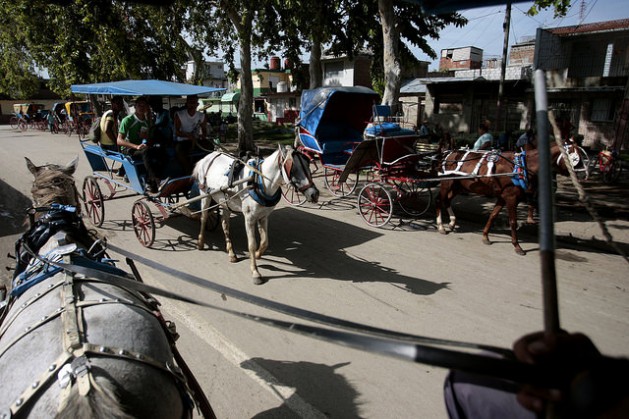 People in the city of Bayamo in the eastern Cuban province of Granma use horse-drawn carts as public transportation. Credit: Jorge Luis Baños/IPS

HAVANA, Oct 30 2014 (IPS) - Up and down the streets of towns and cities in Cuba go horse-drawn carriages with black leather tops and large back wheels, alongside more simple carts, operating as public transportation.

This ancient means of transportation can be seen throughout this country, in urban, suburban and rural areas, where motor vehicles are expensive and there are not enough cars and buses. And in the most remote parts of the country carts are virtually the only way to get around.

As he has done every morning for the past 11 years, Bienvenido García waits for customers at the ‘piquera’ or stop in the resort town of Varadero, 121 km east of Havana, to take them in his carriage along a fixed route down the main street of this tourist town.

“What are needed first of all are solutions that would strengthen and reorient the public transportation system, improve the road infrastructure and reduce vehicle emissions, which would mean upgrading the vehicle fleet.” -- Lizet Rodríguez

Depending on where, what kind of cart, and the distance to be travelled, the cost ranges from two to 10 pesos per passenger (10 to 50 cents of a dollar). But a jaunt in one of the comfortable fancy traditional carriages is much more costly, because they cater exclusively to foreign tourists.

“I used to work in the ‘guaguas’ (public buses). But with the crisis, there weren’t any spare parts or fuel. So I started driving a carriage,” García, a ‘cuentapropista’ or self-employed worker, told IPS.

Like most sectors of the economy, transportation collapsed in 1991 when the East European socialist bloc, Cuba’s main trade and aid partner, fell apart. Observers say measures aimed at recuperating transport have been slow and inefficient.

Cubans were forced to find ways of getting around that did not depend on fossil fuels – such as horses, carts, bicycles and three-wheeled pedal-powered “bicitaxis”.

In response, as part of the socialist government’s opening up to small private businesses and cuentapropistas, new trades were added by the authorities: ‘cochero’ or carriage driver, and ‘bicitaxista’ and ‘mototaxista’, who drive bicitaxis and motorcycle taxis.

In 2010, the government declared that private enterprise was key to easing the chronic public transportation shortage. Most of the country’s 473,000 cuentapropistas work in the areas of food and restaurants, housing rental or transportation.

There are no specific statistics on the number of cocheros, who are mainly men. But they abound in cities like Bayamo, called “the city of the carriages”, and Guantánamo, in the east; Cárdenas and Varadero in the west; and Santa Clara, Ciego de Ávila and Santi Spíritus in central Cuba. 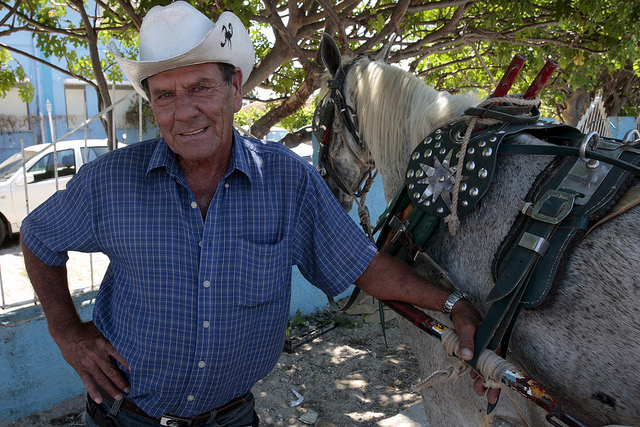 Bienvenido García has been driving a carriage for 11 years in the resort town of Varadero, in western Cuba. Credit: Jorge Luis Baños/IPS

Nor are there clear figures on how many motor vehicles are circulating today in this Caribbean island nation of 11.2 million people. But in July 2013 the local media reported that there were only 7,840 public transport buses – just half of the 15,800 buses serving the population in the 1980s.

And due to the lack of new vehicles, classic U.S. 1950s cars or Soviet-made Ladas are still plying the streets of Cuba’s cities.

“You can just get by on this job as a cochero because the taxes are high,” said García, whose cart carries up to eight people, “the weight that the horse can pull without it being abusive.”

“I keep the ‘culero’ (manure bag) in good shape, to avoid getting the streets dirty, and I taught my horse to make the stops, so we don’t distort traffic on the road,” he said.

But not all of the streets in towns with horse-drawn carts and carriages are as clean as Varadero’s.

“To get something done, people had to complain to the authorities about horses on the streets. There was manure everywhere,” Aliuska Labrada, a young woman who lives in the town of Cayo Ramona, 200 km southeast of Havana, told IPS.

The resurgence of this old means of transportation brought with it problems related to hygiene, the public image of rural and urban areas, traffic safety, and the welfare of draft animals.

Rules established by local authorities included carriage stands that must be kept clean by the drivers, the following of traditional ways of handling carts, and urban areas off-limits to horse-drawn vehicles. And for the drivers to obtain a license, their horses must undergo veterinary exams.

“It’s a more natural means of transportation…but at what price?” wrote a cybernaut who identified herself as Marina in an online IPS forum.

“The horses damage the paved streets and can cause accidents because the drivers don’t have total control over their animals,” she said. “There’s also the question of mistreatment of the animals. Some people exploit them to exhaustion, just to make money from them.”

That is a sensitive issue that animal rights organisations have been complaining about for years. Since 1988, the Scientific Veterinary Council and the Cuban Association for the Protection of Animals and Plants have been presenting a proposed draft law on animal protection to the Agriculture Ministry, without success.

The local scientific community is pressing for the development of green-friendly, sustainable transportation in Cuba.

In an email response to IPS, the engineer Lizet Rodríguez identified several short- and long-term alternatives, although she said the shift to a cleaner transportation system would require an in-depth feasibility study.

“What are needed first of all are solutions that would strengthen and reorient the public transportation system, improve road infrastructure and reduce vehicle emissions, which would mean upgrading the vehicle fleet,” she said.

Rodríguez, a researcher at the Marta Abreu Central University in the city of Villa Clara, 268 km east of Havana, recommended “improving communications over the Internet, to make it possible to carry out a large number of operations online that today require that people physically go somewhere.”

Few people in Cuba have online connection in their homes, most of them dial-up and some wireless. In 2013, there were 2,923,000 users, including both Internet and intranet accounts, which offer access to a limited number of local and international websites.

The engineer said “the use of the bicycle (as long as there are bike paths) would be feasible above all in small and medium-sized towns, and the use of cleaner fuels like natural gas or so-called biofuels – methanol and ethanol, obtained from biomass residue – could be encouraged.”

Last year, renewable energy sources made up 22.4 percent of the country’s primary energy production, according to the latest report by the national statistic institute, ONEI.

Up to now, renewable energy sources have only been used in a handful of industries, mainly for generating electricity, pumping and heating water, and cooking food.