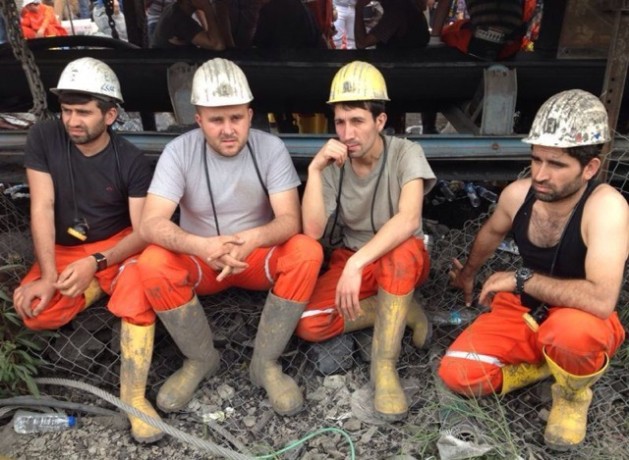 Survivors of the May 2014 Soma mine disaster, the worst in Turkey's history which left more than 300 people dead. Credit: Wikimedia Commons

ISTANBUL, Oct 26 2014 (IPS) - Six days a week, Tahir Cetin spends seven and a half hours hundreds of feet underground on a narrow ledge, mining coal near Soma, Turkey. He breathes in dust that is destroying his lungs, and digs into walls that could collapse on top of him. With one false step, he could fall to his death.

After five years of these conditions, and the low quality of life he faces due to little pay and poor treatment, the father of three says with resignation that it does not matter if he is alive or dead.

“It is slavery,” says Cetin, who lost his nephew in May this year, when an explosion at the Soma coal mine in Manisa in western Turkeycaused an underground  fire, killing more than 300 people in the worst mine disaster in the country’s history. “As workers, we are valuable, but we are despised and mistreated by our country.”

“The reason these people died [in the Soma mine disaster of May 2014] is because of the government’s neoliberal policies of subcontracting and making profits. The people really responsible are those in the government who allow privatisation” – Arzu Cerkezoglu, Secretary-General of DISK

According to Hurriyet Demirhan, a board member of the Chamber of Mining Engineers, nearly every miner in Turkey works under such conditions, which are chronic and widespread, and many wonder if or when another Soma disaster will repeat itself.

Both Demirhan and Arzu Cerkezoglu, Secretary-General of the Confederation of Revolutionary Trade Unions of Turkey (DISK), the union that now represents the Soma workers, believe that this will inevitably happen in one or more of the 450 mines facing exactly the same threat as Soma unless drastic changes are made.

DISK, as well as the Chamber of Mining Engineers, has filed reports about all of them, warning the government of their lack of safety. In 2010, Demirhan even filed a report on Soma, listing it as the most dangerous, but no changes were introduced.

While a fire that knocked out power at the mine and shut down ventilation shafts and elevators caused the Soma disaster, Cerkezoglu blames the government for the accident, and she points her finger at privatisation as the biggest problem with Turkey’s mining sector.

“The reason these people died is because of the government’s neoliberal policies of subcontracting and making profits,” she argues. “The people really responsible are those in the government who allow privatisation.”

Privatisation of Turkey’s mines began in the 1980s, when there was widespread agreement that the state was incapable of running mines efficiently. Now, private companies apply for permits through the Ministry of Energy and when they are approved, they hire auditors, engineers and safety personnel, all of whom are supposed to ensure the safety of the mines and fair treatment of the workers.

However, according to Demirhan, because it is the company that hires these personnel, they do little when they find something amiss. Add to this a mentality of high production at low cost, and the result is extremely poor conditions and abysmal pay.

It is through this process, says Demirhan, that workers lose their rights – and death is the consequence. “All of this is the responsibility of the state,” he adds, “and it is only through policies written by the state that workers can regain their rights.”

Immediately after the Soma disaster, DISK began working directly with mine workers and the families of the deceased to compile a file listing their demands for Soma and mining safety in general, which they presented to the Ministry of Energy in early July.

These demands include greater job security, higher pay, shorter and fewer shifts, an earlier retirement age, and compensation for the families of workers who died in the disaster, including new homes, double salaries, and forgiven debts, according to Tayfun Gorgun of DISK.

Gorgun is currently stationed in Soma and is working with the state to ensure that these demands are met for the 8000 workers still mining in the Soma area. But while the government has made promises to meet these demands, he says, progress has been slow.

The biggest promise the government has made so far has been to do away with subcontracting in the mining sector, which would stop many of the problems caused by privatisation. However, this issue, along with several others, has not even made it into the draft legislation phase.

According to Gorgun, “the government’s strategy is to decrease rights by letting time pass until people forget. The only way to make these changes happen is for the public to continue to care.”

Demirhan agrees, saying: “The state knows we will forget. We have forgotten before, and we will again.”

Cerkezoglu is confident that change will come, saying she believes that “the resistance of workers will lead to a change of living conditions and collective work agreements.”

For his part, Cetin wryly acknowledges that workers have been displaying this resistance. “We have asked for our rights, we’ve gone on strike and we’ve marched,” he says, but then he describes the violence that workers have faced for their efforts, including being beaten with batons and gassed by riot police.