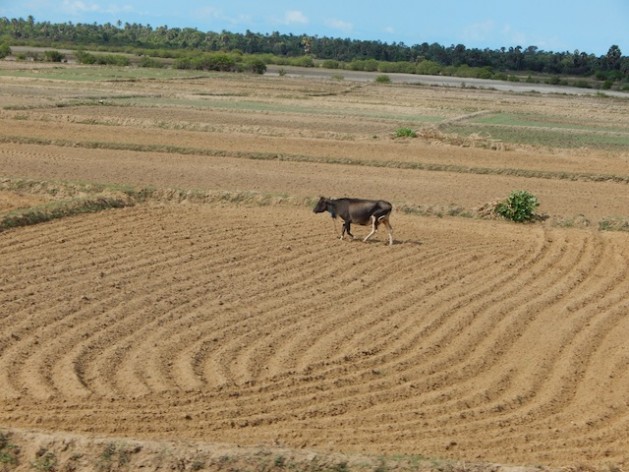 A cow stands in the middle of a dried-out agricultural plot in Sri Lanka's northern Jaffna District. Credit: Kanya D'Almeida/IPS

UNITED NATIONS, Oct 6 2014 (IPS) - In pure numbers, the past few decades have been marked by destruction: over the last 40 years, Earth has lost 52 percent of its wild animals; nearly 17 percent of the world’s forests have been felled in the last half-century; freshwater ecosystems have witnessed a 75-percent decline in animal populations since 1970; and nearly 95 percent of coral reefs are today threatened by pollution, coastal development and overfishing.

A slew of international conferences and agreements over the years have attempted to pull the brakes on what appears to be a runaway train, setting targets and passing legislation aimed at protecting and conserving the remaining slivers of land and sea as yet untainted by humanity’s massive carbon footprint.

In 2010, building on the foundation laid by the Convention on Biological Diversity (CBD), scores of experts and activists gathered in Nagoya, Japan, drafted the Strategic Plan for Biodiversity 2011-2020, which included 20 points known as the Aichi Targets, encompassing everything from land preservation to sustainable fishing practices.

Though the goals were subsequently re-affirmed by the U.N. general assembly, and reiterated yet again at the 2012 Rio+20 Earth Summit in Brazil, scientists say losses continue to outpace gains, as forests are chopped down, garbage emptied into oceans and animal habitats razed to the ground to make way for human development and industry.

Against the backdrop of the ongoing 12th meeting of the Conference of the Parties to the CBD (COP 12), a United Nations progress report on the state of global biodiversity released Monday in Pyeongchang, Korea, called urgent attention to unmet targets and challenges ahead.

Coming exactly a year before the halfway point of the 2011-2020 Strategic Plan and the United Nations Decade on Biodiversity, ‘Global Biodiversity Outlook 4’ (GBO-4) called for a “dismantling of the drivers of biodiversity loss, which are often embedded deep within our systems of policy-making, financial accounting, and patterns of production and consumption.”

For instance, according to the World Wildlife Fund (WWF)’s latest Living Planet Report, humans are “using nature’s gifts as if we had more than just one Earth at our disposal.”

The organisation’s Living Planet Index (LPI), based on studies of over 10,000 representative populations of mammals, birds, reptiles, amphibians and fish, found that exploitation of natural resources by humans accounted for the vast majority of wildlife losses in the last four decades (37 percent), followed by habitat degradation (31 percent), climate change (seven percent) and habitat loss (13 percent).

The same report found that human impacts such as increased pollution and construction projects were largely responsible for the steep decline of wildlife in freshwater systems, with 45,000 large dams (over 15 metres) preventing the free flow of some of the world’s major rivers, at a huge cost to biodiversity.

Marine animal populations have also plummeted by 40 percent, making a strong case for the rapid designation of adequate marine protected areas. However, according to the GBO-4 released today, “more than half of marine regions have less than five percent of their area protected.”

According to David Ainsworth, information officer for the Secretariat of the Convention on Biological Diversity, “The question of agriculture and food security is probably one of the biggest challenges we are facing.”

“Given that we know we’re looking at a substantial population increase by the end of the decade, which is likely going to be matched with a change in dietary patterns such as the consumption of more meat, we are probably going to experience tremendous pressures on biodiversity just in trying to deal with the agricultural situation alone,” he told IPS.

A lot of this could be solved, he added, by dealing with food production systems, by promoting a different model to the typical, rich, North American diet and by tackling food waste at all stages of the production cycle, from wastage in fields and transportation chains to food distribution centers and even in the home.

With a population of just over 4.2 billion people, the Asia-Pacific region faces a unique set of challenges to preserving its biodiversity.

According to Scott Perkin, head of the Natural Resources Group at the International Union for Conservation of Nature (IUCN)-Asia, the region “has taken some important steps towards the achievement of the Aichi Targets.

“A majority of countries in the region have revised and strengthened their National Biodiversity Strategies and Action Plans (Target 17), and a significant number have ratified the Nagoya Protocol (Target 16),” Perkin told IPS in an email.

But the region as a whole remains under tremendous pressure, he said, adding, “Population growth and rapid economic development continue to fuel the loss and degradation of natural habitats, and much greater efforts will be required if Target 5 on halving the rate of loss of forests and other habitats by 2020 is to be achieved.”

Indonesia alone experienced a deforestation rate of one million hectares a year between 2000 and 2003. A recent study indicates that in 2012 the country likely hacked away 840,000 hectares of primary forest, outstripping even Brazil, which cut down 460,000 hectares that same year.

Perkin said the illegal wildlife trade in Asia is yet another critical issue, one that will make achievement of Target 12 – preventing the extinction of known species – especially challenging.

The region also provides a stark example of the links between biodiversity and economic gains, a point also highlighted in the report released today. According to GBO-4, reducing deforestation rates have been estimated to result in an annual benefit of 183 million dollars in the form of ecosystem services.

The same pattern is evident throughout the Asia-Pacific region, particularly in places where governments have replaced marine resource exploitation with conservation efforts.

In the western Pacific Ocean nation of Palau, for instance, the banning of commercial fisheries has boosted the tiny island’s ecotourism potential, with visitors rushing to explore the country’s bustling coastal waters.

A single shark, which had hitherto brought the country a few hundred dollars for its fin, considered a delicacy in East Asia, now fetches 1.9 million dollars over its entire lifetime.

In Indonesia too, the creation of the world’s largest sanctuary for manta rays has raised the sea-creature’s economic potential from some 500 dollars (when used for meat or medicine), to over one million dollars as a tourist attraction, according to Bradnee Chambers, executive secretary of the U.N. Environment Program (UNEP)’s Convention on the Conservation of Migratory Species of Wild Animals.

Still, it will take more than piecemeal measures to bring about the scale of protection and conservation required to keep biodiversity levels at a safe threshold.

As Ainsworth pointed out, “The core of this issue goes beyond the questions of where we put our roads and highways – it goes to fundamental ways of how we organise ourselves socially and economically in relation to nature and biodiversity.”