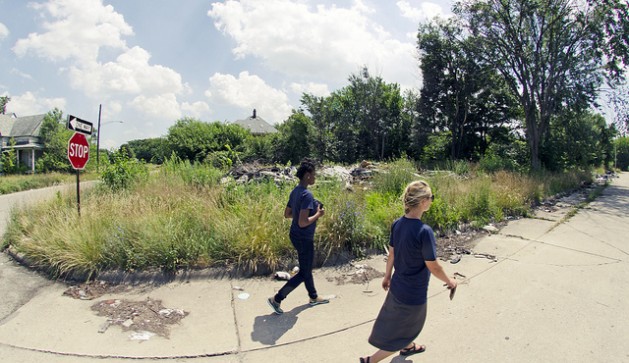 What they saw and heard in a city struggling to emerge from historic bankruptcy were mass water shutoffs and conditions they described as “a perfect storm.” The U.N. experts issued a call for a national affordability standard that would protect the poorest and most vulnerable.

The city of Detroit, the state of Michigan and nations worldwide are on the cusp of making decisions that will lock generations to come into trillions of dollars of water and sanitation infrastructure investments, requiring staggering increases in water rates to households, small businesses and communities.

After speaking to hundreds of consumers, local authorities, and City of Detroit water and sewerage utility staff, the U.N. experts reported the scale and impacts of the shutoffs as unprecedented in their experience.

Freedom of information act responses from the City of Detroit showed that in 2014, 27,500 water shutoffs took place. The utility was not able to say how many persons were affected, how many residences were vacant, nor the impacts of the mass water shut off programme.

How could this be? This was the United States. This was Detroit — in previous years, one of the nation’s thriving manufacturing cities. As the third largest water and sanitation public service provider in the United States, Detroit’s utility serves 40 percent of the state of Michigan’s population, similar to large urban utilities around the world.

The City of Detroit, the state of Michigan and nations worldwide are on the cusp of making decisions that will lock generations to come into trillions of dollars of water and sanitation infrastructure investments requiring staggering increases in water rates to households, small businesses and communities.

Detroit is the tipping point, and the lesson we must learn. Water is the great equaliser. Everyone must have access to survive.

Water availability, quality and affordability are increasingly global issues, in developing and developed countries and particularly within major urban areas like Detroit. More than half the world’s population now lives in a city.

The United States is similar to other countries in terms of urban water and sanitation service challenges, but unique for a few important reasons. First, the U.S. can bring economic resources to bear to solve these issues that are beyond the capacities of most developing countries.

That said, the United States is also unique in problematic aspects. There are unintended consequences of a water shutoff in the U.S. Unpaid bills are often converted to liens against properties, and homes are being foreclosed upon as a result of unpaid water and sewerage bills.

In Detroit and other cities, tenants who have no control over upkeep of properties they are renting are burdened with escalating water bills due to unrepaired leaks. Residences can be condemned for unsanitary conditions.

Most disturbing, water shutoff is a de facto sign of neglect: by law, children may be removed from the custodial care of their parents and placed in state care.

In terms of urban water issues specifically, the United States shares with other countries significant gaps in understanding the contours of the problem– and in our policy framework to address it.

In the U.S., we do not know the extent of the problem or who is impacted. Neither health officials, utilities, local, state or federal governments are required to collect data. Nor do we have in place sufficient programmes to address the problem of lack of access by the poorest and most vulnerable.

There are few, if any, existing official data sources on the impact of water shutoffs. No utility in the U.S. — including Detroit — is required to assess a household before shutting off water service, to report on shutoffs with demographic data, or to assess the public health implications of shutoffs for children, elderly, disabled or chronically ill — precisely those for whom a water shutoff poses an extraordinary burden.

Fortunately, some states have adopted protections for certain populations against water shutoffs. In New England, Massachusetts, Connecticut and Rhode Island prohibit water shutoffs to households with infants less than 12 months of age up to children under two years of age.

Some states and utilities have provisions for persons with chronic illness to delay a water shutoff with a medical certification.

These practices, along with their rate implications, should be researched as best practices and expanded.

The U.S. and other countries can study how service providers in these countries use other collection procedures and affordability protections to ensure their own financial sustainability while still ensuring water access for lowest income consumers.

Where oversight is weak or non-existent at state or city levels, or where political conditions no longer afford the checks and balances of a two-party system, national governments must have a role, give guidance, and monitor water availability, quality and affordability, to ensure basic constitutional protections.

Constitutional protections must include due process, representation and continuing service for both disputed bills and low income consumers, while making arrangements for an affordable payment plan.

21st century challenges will add the overlay of increasingly more difficult environmental issues. What will define us is how we as a nation and as a world community respond to drought, flooding, water shortages, water contamination — and ensuring access to water as a human right.