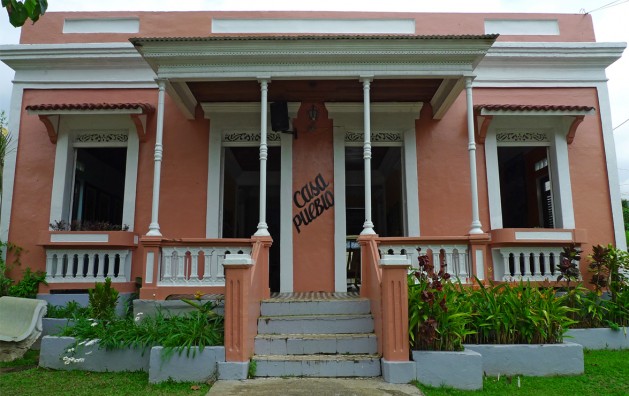 SAN JUAN, Oct 1 2014 (IPS) - The heart of Puerto Rico’s central mountain range is the site of an extraordinary story of struggle and triumph.

Since the 1960s, the government of this commonwealth of the United States had intended to authorise strip mining for copper in the mountain municipalities of Lares, Adjuntas and Utuado. But a decades-long grassroots environmental campaign forced the government to desist.

“We are economically self-sufficient, and because of that our talk of freedom is not mere discourse.” -- Casa Pueblo director Alexis Massol

In 1996, then-governor Pedro Rosselló forbade strip mining in the island and signed into law the designation of the parcel of land where the digging would start as “The People’s Forest” (El Bosque del Pueblo).

The successful opposition to mining was led by Casa Pueblo, a non-governmental organisation based in Adjuntas. The group was founded in 1980 by artists, intellectuals and environmentalists associated with Juan Antonio Corretjer, internationally renowned poet and one of the independence movement’s top figures until his death in 1985.

From 1937 to 1942, Corretjer was imprisoned in the United States for his association with the Nationalist Party, which engaged in armed struggle for independence.

In 1982, a secret source inside La Fortaleza (the governor’s mansion, which houses the executive branch) leaked to Corretjer’s group a mysterious map of Puerto Rico, which showed the island crisscrossed with what seemed like infrastructure projects, highways, petrochemical factories, open pit mines and military bases.

Corretjer tasked Casa Pueblo, back then called the Arts and Culture Workshop, with researching what the map meant. After consulting several sources, including the U.S. Army Corps of Engineers, the group uncovered Plan 2020, a secretive resource extraction and militarised economic development scheme which had strip mining at its heart.

Over 30 years after the exposure of Plan 2020, strip mining was stopped before it began, but other elements of the plan, like the construction of superhighways, continue apace in spite of environmentalist protests.

Casa Pueblo has remained vigilant in its protection of Puerto Rico’s environment and active in promoting sustainable development. From 1999 to 2003, the organisation aided protesters who engaged in civil disobedience to shut down a U.S. Navy firing range in the island-municipality of Vieques. Casa Pueblo’s volunteers carried out peer reviewed in situ scientific studies of military pollution in the firing range.

For its work for peace and development, Casa Pueblo won the prestigious Goldman Environmental Prize in 2002.

“This is a project of evolution and re-evolution,” said the organisation’s founder and director, Alexis Massol. “It is a response to the capitalist colonial project that the U.S. empire seeks to impose on us. Our project is dynamic; it is not afraid to face errors or contradictions. And it combines education and action.”

Casa Pueblo is named after its physical home, an old house that was taken and restored by the organisation in the mid-1980s. The house has a community library and a large hall often used for meetings and cultural and artistic activities.

Its second floor is used by an artist in residence programme. In the back there is a butterfly sanctuary and another structure which houses Radio Casa Pueblo. Founded in 2007, it is Puerto Rico’s first ever community radio station.

Independence is very important for Casa Pueblo. Since 1989, it has been funded by sales of its own artisanal brand of coffee, Madre Isla. Much of it is grown in Casa Pueblo’s own Madre Isla farm, which also has an eco-tourism project.

In 1999, the Casa Pueblo building went off the electricity grid and switched to a solar energy system.

“We are economically self-sufficient, and because of that our talk of freedom is not mere discourse,” Massol told IPS. “We speak with our own independent voice and we do not make alliances with political parties.”

The organisation’s most ambitious project is the Model Forest. This proposed forest, which has been signed into law by governor Alejandro Garcia-Padilla and is currently being amended and negotiated by the Puerto Rico House and Senate, will cover some 379,000 acres and link 20 existing natural protected areas through ecological corridors.

“The Model Forest is a project of sustainable economic development, ecological preservation and citizen participation,” according to economist Mike Soto-Class, president of the Center for a New Economy, a business think tank based in the capital city of San Juan.

“It promotes conservation while it generates business and jobs, and it contributes to the country’s food security. It is a project that exemplifies a paradigm shift in the use of resources, and in the way development and governance models are conceived.”

“A Model Forest is a territory in which people organise and participate to manage their forests and other natural resources together in search of sustainable development,” according to the Iberoamerican Network of Model Forests (RIABM). “Model Forests contribute to reaching global objectives of poverty reduction, climate change, the struggle against desertification and the Millenium goals.”

There are currently 28 model forests in Latin America.

“In this forest there will be popular participation and shared governance,” explains Massol. “It will be an ecological project but will also include economic development, especially agriculture.”

Casa Pueblo has proposed that the Model Forest be a zone of sustainable agriculture free of genetically modified crops.