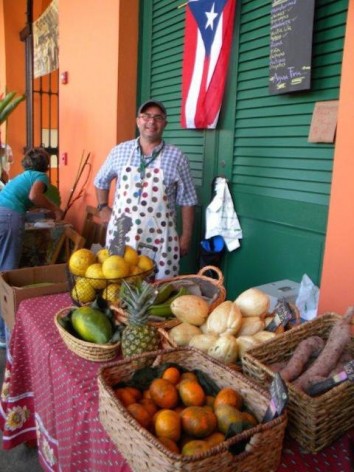 SAN JUAN, Puerto Rico, May 21 2014 (IPS) - Agriculture in this Caribbean island is going through its worst moment. Whereas this sector accounted for 71 percent of its gross domestic product in 1914, now it amounts to no more than one percent.

A century ago, local agriculture employed over 260,000 workers, nowadays it employs 19,000. Over three billion dollars leaves the island through food imports, according to data published in the local press.

Puerto Rican Agriculture Secretary Myrna Comas, who has been in office since last year, is widely regarded as the island’s top food security scholar. Prior to directing the agriculture department, she conducted extensive research into local food security issues as professor at the University of Puerto Rico.

“We want to double the farmers that we buy from on a weekly basis, from 10 to 20. And we also aim at setting up drop off points for our produce all over Puerto Rico.” -- Departamento owner Tara Rodriguez

According to her research, Puerto Rico imports over half of its dairy products, around 70 percent of its coffee, over 80 percent of its meat, over 90 percent of its fruit, and all of its sugar and cereal grains. The island’s food insecurity is further compounded by the fact that 76 percent of these food imports come from one single country: the United States. Almost all of this food comes from the ports of New Jersey and Florida, with 75 percent of all the food coming from the latter. Food imported from the U.S. travels an average of 1,310 miles.

But Comas found that Puerto Rico imports food from 57 other countries. Imports also come from China (four percent of total food imports), Canada (three percent) and the Dominican Republic (two percent). Food is also imported from other distant countries like Kenya, Tanzania, Vietnam, Thailand, Malaysia and Poland. Food from Asia to Puerto Rico has traveled over 16,000 kms, and can take up to 47 days to arrive as it is unloaded on the U.S. west coast, trucked across to the east coast, sent through distribution centres, and finally loaded into ships headed to Puerto Rico.

The agriculture secretary has made it her business to increase agricultural production in order to reduce reliance on imports and thus assure Puerto Rico’s food security. But the island’s budding organic farming movement faults Comas for not questioning the prevailing industrial agriculture model, which critics claim poisons the environment with toxic agrochemicals, contributes to climate change, is harmful to the health of both agricultural workers and consumers, and cannot insure food security.

The United Nations International Assessment of Agriculture, Science and Technology for Development (IAASTD) found that the dominant model of modern agriculture is undermining the planet’s ecological and social systems and endangering the future of humanity. The report was written by over 400 scientists and went through two peer reviews.

“Modern agriculture, as currently practised, is devouring our capital. It is mining the soil, our natural resource base, and it is unsustainable, because it is both fossil energy- and capital-intensive and because it is not based on a full accounting of the externalities,” said IAASTD co-chairman Hans Herren. “Continuing with current trends would exhaust our resources and put our children’s future in jeopardy.”

The report endorses small-scale sustainable agriculture as an alternative. The U.N. Rapporteur on the Right to Food, Olivier de Schutter, and a recent report by the U.N. Conference on Trade and Development, both reached similar conclusions.

Ian C. Pagán, a young agronomist, farmer, writer, activist and educator, runs the El Josco Bravo Agroecology Project in the municipality of Toa Alta. Pagán, who has a Master’s Degree in soil restoration and sustainable agricultural practices, is a passionate advocate of agroecology and is not afraid to debate advocates of industrial agriculture.

“There are many myths about alternative agricultural production systems,” Pagán told IPS. “These myths are propagated precisely by multinational agribusinesses that profit from farming systems that are highly dependent on external inputs.”

“Science itself has demonstrated the productive potential of agroecology versus conventional agriculture. For starters, over half of world food production is in the hands of small campesino farmers, most of whom are practicing agroecologically based farming.”

“Furthermore, agroecological production has greater resilience to climate change and is more energy efficient. These two aspects are ever more important in a world that is now facing environmental and energy crises.”

Local organic farmers get their produce to consumers through various innovative ventures, such as El Departamento de la Comida (The Food Department), an alternative retailer located in the working class urban neighborhood of Tras Talleres in San Juan.

The Departamento is switching to non-profit status. To fund this transition, it is raising money through Antrocket, a Puerto Rican online crowdfunding platform.

“We aim at creating Puerto Rico’s first ecological food hub,” said Departamento owner Tara Rodriguez in an interview. “We will work with the entire food production cycle, and that includes consumer education, services for farmers, and various aspects of sustainability.”

“The money we are raising will go into improvements in our equipment that will make it possible to scale up our operations and become an NGO [non-governmental organisation] with a business model, a community non-profit corporation,” said Rodríguez, whose mother, Silka Besosa, quit her lucrative job managing a shopping mall to become an organic farmer. Besosa died of cancer in 2011.

“We want to double the farmers that we buy from on a weekly basis, from 10 to 20. And we also aim at setting up drop off points for our produce all over Puerto Rico.”

Rodriguez emphasises that education is very important. “We educate consumers as to why everything we sell is organic and local, and and explain to them the importance of paying our farmers a fair price for their product.”