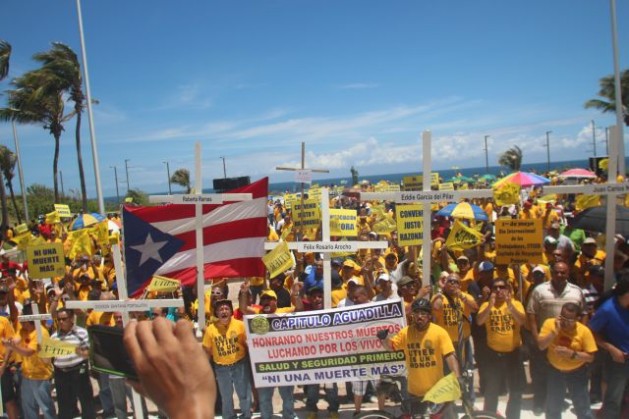 SAN JUAN, Apr 15 2014 (IPS) - Puerto Rican society has been shaken to its foundations by the announcement in February by Standard & Poor’s and Moody’s credit rating agencies that they had downgraded the island’s creditworthiness to junk status.

“The problems that confront the commonwealth are many years in the making, and include years of deficit financing, pension underfunding, and budgetary imbalance, along with seven years of economic recession,” said Moody’s.

"Working people are faced with three choices: they can migrate, resign themselves to poverty, or go out to the street to organise and struggle for justice." -- Luis Pedraza-Leduc

Located in the Caribbean Sea, Puerto Rico has been a Commonwealth of the United States since 1952.

Moody’s added that the island’s worsening economic situation has “now put the commonwealth in a position where its debt load and fixed costs are high, its liquidity is narrow, and its market access has become constrained.”

In order to meet its debt obligations, the PR legislature has considered enacting fiscal measures that are strongly opposed by labour unions, including dipping into the public school teachers’ retirement fund. Law 160, the retirement “reform”, was approved by both House and Senate earlier this year.

Unions have headed to court to challenge the law. On Apr. 11, the Puerto Rico Supreme Court ruled some key provisions were unconstitutional because they breached teachers’ contracts.

Schoolteachers’ unions declared the ruling a triumph, although the court upheld other parts of the law that adversely affect Christmas bonuses, summer pay and medical benefits.

The current fiscal crisis is the result of the commonwealth economic model’s failure, according to union official Luis Pedraza-Leduc.

“Our economic model, based on providing cheap labour to the pharmaceutical and petrochemical industries and light manufacturing, has exhausted itself,” said Pedraza-Leduc, who runs the UTIER utility workers union’s Solidarity Programme (PROSOL) and is spokesperson of the Coordinadora Sindical, a coalition of over a dozen unions.

“In recent decades there has been a worldwide trend towards reducing state involvement in the economy to a minimum,” he told IPS.

“Things that were considered basic services provided by the state are now turned into commodities as private enterprise moves in to fill those spaces. Rather than reducing these essential services, the government went into debt.”

According to a chart provided by the office of PR Governor Alejandro Garcia-Padilla, the commonwealth’s public debt reached 10 billion dollars in 1987, when the Popular Democratic Party (PDP) ruled, and passed the 20-billion-dollar mark in 1998 under governor Pedro Rossello, of the New Progressive Party.

Under PDP governor Sila M. Calderon (2001-2004) the debt went over 30 billion dollars. And at the end of his 2009-2012 mandate, NPP governor Luis Fortuño left the country with more than 60 billion in debt. Garcia-Padilla belongs to the PDP.

Pedraza-Leduc recalls that successive governors undertook neoliberal measures that made matters even worse.

“Governor Rossello privatised the health sector, the phone company and the water utility. Governor Acevedo-Vila [of the PDP, 2004-2007] imposed a sales tax on retail sales [known as IVU],” he said.

Governor Fortuño laid off over 30,000 public sector workers, and introduced “public-private partnerships”, which were decried by labour unions as thinly disguised privatisation schemes. Upon beginning his mandate in early 2013, Garcia-Padilla privatised the San Juan international airport and is considering new taxes.

The Puerto Rico Constitution obligates the government to honour its debts.

“In order to pay bondholders, the government could close down schools, reduce the number of Urban Train daily trips, scale down 911 emergency phone services, and freeze the hiring of employees”, warned Pedraza-Leduc. “They are considering reducing Christmas bonuses and sick leave days.”

According to University Puerto Rico economist Martha Quiñones, “We are having here the same crisis as Greece and Detroit, but here it is broader because of our colonial situation.

“We had an economic model based on bringing foreign corporations and enticing them with cheap labour and tax incentives,” she told IPS, calling this the “exogenous” model, which is based on bringing investment from outside.

“It did not work. Not enough jobs were created, and the unemployed do not pay taxes. Locally owned businesses ended up picking up the tax burden that foreign investors were exempted from, which caused many of them to close. Local and foreign businesses were not competing in conditions of equality.”

Quiñones said that the model’s death knell was the North American Free Trade Agreement (NAFTA) and other similar trade deals that the U.S. has struck, which made even cheaper labour available in other parts of the world.

Successive Puerto Rico governments made up for these failures by requesting help from the U.S. government in the form of food stamps and unemployment benefits, and other forms of social assistance. Another way was by issuing bonds, which led to long-term debt and the current debacle.

As an alternative, Quiñones advocates an “endogenous” economic model, which strengthens local capabilities rather than looking abroad for deliverance. “The government must support locally owned businesses,” she said. “Those are the businesses that create jobs at home and pay taxes.

“The government must also collect the IVU sales tax, which most retailers simply pocketed. A progressive tax reform is needed, plus rich tax evaders must be brought to justice. Start by investigating businesses that take only cash, and individuals who are taking second mortgages. Those are pretty obvious red flags.”

She also advocates that the health system be changed to single payer, “which would be more efficient than the current inefficient and unsustainable health system we have now.

“Working people are faced with three choices: they can migrate, resign themselves to poverty, or go out to the street to organise and struggle for justice,” said Pedraza-Leduc.

But he admits that the prospects for all-out popular struggle are uncertain at best. “The lack of class consciousness complicates the outlook. Maybe we are not prepared for a confrontation,” he said.

To him, the way out of the impasse lies in education. “I propose an educational project, a Union School [Escuela Sindical] that can transcend the unions and branch out into broader issues and thus further the political struggle.

“And we need a new model for our country, we need to speak concretely about justice and a fair distribution of wealth.”