Zafar Adeel is director of the UN University Institute for Water, Environment and Health 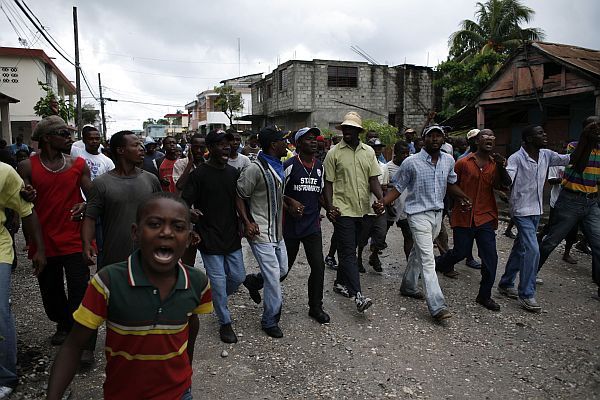 Protesters march through Port-au-Prince in April 2008 to demand the government lower the price of basic commodities. Credit: Nick Whalen/IPS

HAMILTON, Canada, Oct 21 2014 (IPS) - Recent events in the Arab world and elsewhere have underscored the point that traditional notions of security being dependent solely on military and related apparatus are outmoded.

Security is a multi-faceted domain that operates at the nexus of human development and sustainable management of water, energy and food resources.

“Water, Energy and the Arab Awakening,” a new book from an association of former world leaders, the InterAction Council, co-edited and published by the UN University Institute for Water, Environment and Health, explores dimensions of security from a range of angles and offers some uncommon conclusions.

Much has been written in the recent years about water security as the crucial fulcrum on which human development and overall security balances. Access to modern energy services and adequate food, safe drinking water and sanitation are now deemed key determinants.

A clear indication of this increased awareness was provided by global business and political leaders in Davos last year, who recognised water insecurity as one of the five most important world risks.

And food production is integrally linked to water availability – in most water-scarce countries, over 80 percent of water withdrawals support agricultural production.

It is also increasing clear that our use of resources, particularly freshwater, is not in line with availability. Nowhere is this more obvious than in the Arab region, where countries suffer water scarcity, worsening with rising population and changing (warming) climate patterns.

The new book argues that reversing this situation requires consumption patterns realigned with available resources. And it downplays the significance of military might as part of the overall security equation.

Enhancements in the energy sector — utilising newer technologies and greener generation — can conserve water resources, improve access to energy and boost energy markets. In the book, Majid Al-Moneef of the Supreme Economic Council of Saudi Arabia argues that national energy companies must play an enhanced role in this re-alignment.

Meanwhile, the food prices spikes of 2006-2008, argues Rabi Mohtar of Texas A&M University, can be linked to steep energy prices and to steering agricultural land to biofuel crop production. While the precise drivers of the global food prices are debatable, it is clear that availability of water and productive land, and the cost of energy are key.

The nexus of water, energy and food security demands re-thinking governance of these sectors. We can no longer afford isolated, ‘siloed’ management. The magnitude of these sectors and the respective proportion each contributes to national GDP varies very significantly from country to country.

But the water sector almost always comes out as a junior ministry or bureaucracy in national governments, making its integration difficult.

Some of the water will be desalinised for consumption, while also facilitating energy generation and food production. Former Jordanian Prime Minister Dr Majali notes that Israel, Palestinian Authority, and Jordan are all potential beneficiaries.

There is little argument left that the greatest impacts of climate change are on the water cycle. And these changes can already be observed in spades — for example, in the extreme floods in Australia, Pakistan, Western Europe, and Canada of the last five years. The same can be said of prolonged droughts in Middle East and Central Asia.

The IAC, however, argues in the book that water security should be a major consideration for the UNSC as climate change impacts manifest themselves in the form of water insecurity.

How the international community delivers its response to these multi-faceted problems is key; piecemeal solutions are clearly inadequate. The international development community, often led by the U.N. system, has an obvious central role. Numerous caucuses, most notably the summit-level G20, also have an increasing role to play in ensuring that these responses are comprehensive, geographically appropriate, and adequately resourced.

The Arab region is truly the test-bed of whether these solutions will work or not. As all eyes are turned towards the recent developments in Syria and Iraq, there is a wider narrative that relates to stemming problems before they get out of control elsewhere in the region.