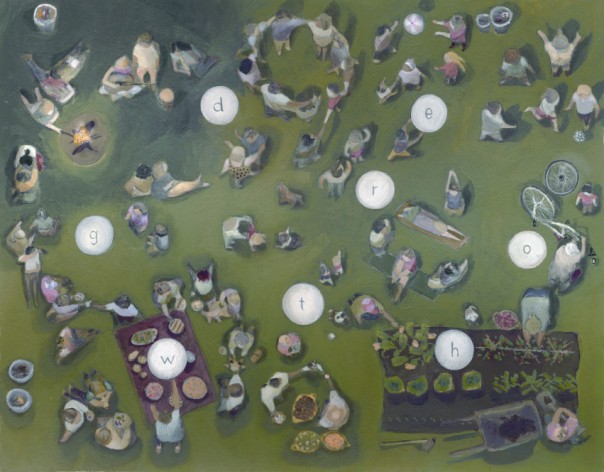 Detail from the cover of ‘Degrowth: A Vocabulary for a New Era’

BUDAPEST/BARCELONA, Nov 22 2014 (IPS) - For anyone who recently attended the Fourth International Conference on Degrowth in Leipzig, Germany, listening in on conference talk, surrounded by the ecologically savvy, one quickly noticed that no one was singing the praises of sustainable development.

Nonetheless, development per se and all that this entails did take centre stage, as a crowd of three thousand participants and speakers debated ongoing trends in the fields of environment, politics, economics and social justice.

Given that it may not be immediately clear why a rallying cry anchored to ecological principles would call for the demise of sustainable development – which in generic terms could be described as the environmentalist programme dating back several decades – it seems that a clarification or two would be in order.

As is the case with social movements, they evolve and go through periods of transformation like anything else does. When the term sustainable development came into use in the 1970s and 1980s, it did support the assumption that general environmental principles and minimum ecological limits should be respected when going about the everyday business of development.

From the vantage point of economic realism, development is inextricably connected to economic growth. However, degrowthers carry the deeply-held belief that economic growth simply does not deliver what it promises: increased human welfare

The term sustainable development rapidly gained wide-scale acceptance, with the U.N. Commission on Sustainable Development just one of the many (inter)governmental or top-down bodies that have set up in the past three decades to include environmental goals in planning and policy.

“Thus we find ourselves at a place where we need to readdress the flaws of sustainable development with a fresh perspective,” says Demaria.

It is with the hopes to do just that in a clear and powerful way that Demaria, along with Giorgos Kallis and Giacomo D’Alisa, have produced the new book Degrowth: A Vocabulary for a New Era, which has just been released by Routledge.

This volume includes 50 entries that all touch on specific aspects of degrowth and go a long way towards elucidating the distinguishing factors of degrowth, as well as properly defining concepts ranging from conviviality to bioeconomics, societal metabolism and many others.

The historical development of the degrowth movement is also spelled out. Thus we learn that in the 1970s, at the time of the first phase of the degrowth debate, when The Limits to Growth by Dennis and Donella Meadows and others was published, resource limits was the talk of the town. Yet now, in what can be called the second stage, criticism of the hegemonic idea of sustainable development has come to the forefront.

Latouche and others in the French-speaking world began to give shape to the French movement, which called itself décroissance and eventually spread to other countries, entering Italy as decrescita and Spain as decrecimiento. Eventually, by 2010, degrowth emerged as the English-language term, well suited for universal applicability.

For many of the attendees of the degrowth conference in Leipzig, the set of vocabulary of the degrowth movement and even the very name degrowth begged to be dealt with carefully. There were a few proposals to switch to a name carrying positive connotations, instead of defining a movement based on opposition to something – growth in this case.

But Latouche and Demaria both argue that the word degrowth most concisely defines one chief objective of the movement – the abolition of economic growth as a social objective. Referred to as a missile word, it is disturbing for some, exactly because it intends to be provocative; as such, this has borne fruit.

There are certainly positive concepts to highlight in the degrowth movement. These include voluntary simplicity, conviviality and economy of care. Yet none of these terms are broad enough to be inclusive and representative of the breadth of ideas that make up the entirety of degrowth.

Perhaps Francois Schneider, another of the degrowth pioneers, put it best when he defined degrowth as: “equitable downscaling of production and consumption that will reduce societies’ throughput of energy and raw materials.”

The goal in all of this, according to the authors of the new book, is not simply to have a society that can manage with less, but to have different arrangements and a different quality. That is where the idea of societal metabolism (that is, energy and materials within the economy) comes into place, because it explains how a degrowth society will have different activities, rearranged forms or uses of energy, and significantly different allocations of time between paid and non-paid work.

Taking social relations as well as the time-work relationship a step further, the theory of dépense, also described in the new book, comes in handy. Dépense signifies the collective consumption of ‘surplus’ in a society.

Nowadays, surplus time and energy is often re-invested in new production or used in an individualistic manner. This follows the dictum of capitalism whereby there should not be too many wasteful expenses; at the most individuals can employ their own all-too-brief methods to unwind from stressful life in the rat race.

Yet degrowth advocates point to the habits of older civilisations where surplus was dedicated to non-utilitarian purposes, be they festivals or celebrations. Degrowthers prefer to see an application of dépense to community-based uses that place conviviality and happiness-inducing activities above economic factors.

While no one can predict when and how the degrowth transition will take place, Demaria stresses that examples of this transition are already here. “Look no further than the transition town movement in the United Kingdom or Buen Vivir in South America,” says Demaria.

Demaria and others also hope that one specific effect of the Leipzig conference, as well as the brand new volume on degrowth, will be to re-politicise environmentalism. Sustainable development de-politicises real political oppositions and underlying dissonance, contributing to the false imaginary of decoupling: perpetuating development without harming the environment.

“Once we decide that we are not afraid to talk about the full implications of development, be they economic, social or political,” says Demaria, “then we begin to see that it is actually utopian to think that our societies can be based on economic growth for ever. Degrowth, by contrast, really offers the most common sense of all.”