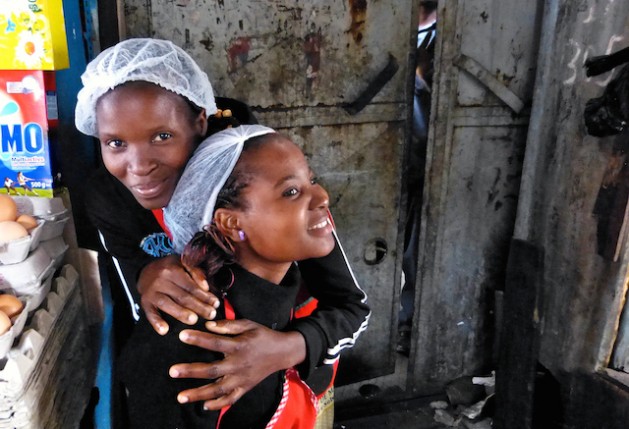 Gender inequalities explain why prevention is failing to contain HIV infection among young women in East and Southern Africa. UNAIDS calls for a major effort to reduce their risk of infection. Credit: Mercedes Sayagues/IPS

NAIROBI, Nov 7 2014 (IPS) - Experts are raising alarm that years of HIV interventions throughout Africa have failed to stop infection among young women 15 to 24 years old.

“Prevention is failing for young women,” says Lillian Mworeko, HIV expert with International Community of Women Living with HIV in Eastern Africa, based in Uganda.

Among women in East and Southern Africa, four out of ten new HIV infections among women aged 15 years and over happen among  those aged 15 to 24, according to the Joint United Nations Programme on HIV/AIDS (UNAIDS).

Worryingly, HIV infection rates among young women are double or triple those of their male peers. In South Africa, the HIV prevalence of 18 percent among women aged 20-24 is three times higher than in men of the same age.

The failure of prevention: young women and HIV in East and Southern Africa

In Lesotho, HIV prevalence of four percent among adolescent girls rises four-fold by the time they are 24.

The age of consent for marriage is 15 years in Malawi and Tanzania.

Nearly half of all girls in Malawi are married by age 19.

In Tanzania, HIV prevalence jumps from one percent among girls under 17 years old to 17 percent by age 24.

In Sub-Saharan Africa, adolescent and young women account for one in four new infections.

Experts attribute this high HIV prevalence to gender inequalities, violence against women, limited access to health care, education and jobs, and health systems that do not address the needs of youth.

Muchai, a reproductive health expert in Kenya, says it is not just sex that drives HIV infections among young women but the age of the male sexual partner.

“The risk increases steadily with male partners aged 20 years and over,” she explains.

Older men are more likely to have HIV than teenage boys. The Kenya AIDS Indicator Survey 2012 shows that male HIV prevalence remains low and stable until the age of 24, when it shoots up significantly.

Due to intergenerational sex, women in this region are acquiring HIV five to seven years earlier than men, says Muchai, because these relationships are characterised by multiple sexual partners and low condom use. In transactional sex, the young woman receiving gifts or money loses power to negotiate safe sex.

But Kenya is not a unique scenario.

In Swaziland, Lesotho and Botswana, more than one in 10 females aged 15 to 24 are living with HIV, according to UNAIDS.

Dr Gang Sun, UNAIDS country director in Botswana, says that, in spite of the country’s remarkable progress in reduction of new infections and treatment, HIV is still a girls’ and women’s epidemic due to gender inequality and unequal power dynamics.

Among Batswana youth aged 20 to 24 years, HIV infection among women triples that of men, nearly 15 percent compared to 5 percent, he says.

In Swaziland, HIV prevalence is six percent for girls aged 15 to 17 but rises to a whopping 43 percent by age 24. 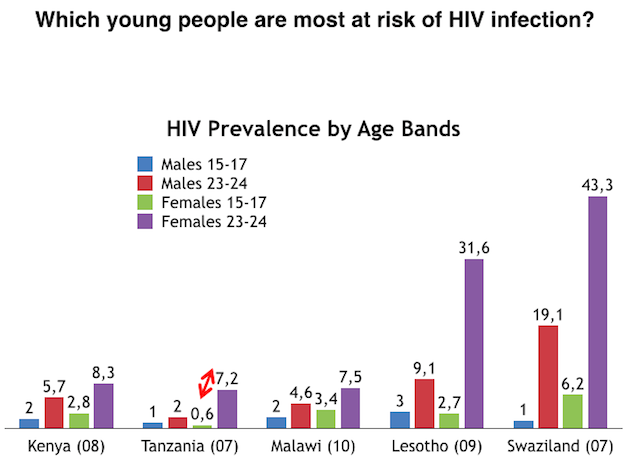 A package of interventions

Kieffer says that many of the issues – poverty, lack of secondary education, few jobs, rape and intimate partner violence – that underpin the unacceptably high HIV prevalence among young women are bigger than what HIV programs alone can address.

Mworeko observes major gaps in reproductive and sexual health services for young people, when they are neither children nor adults, in the region.

“Whether it is prevention, treatment, care and support services, young people do not have a youth friendly corner,” she says.

Paska Kinuthia, youth officer with UNAIDS in South Africa, told IPS that sexuality education needs to be strengthened in schools across the region.

Experts agree there is no one single solution to protect young women and a combination of interventions is needed.

Addressing restrictive laws on the age of consent for HIV testing and for access to sexual and reproductive health services would be a good place to start, experts say.

Promoting gender equality and providing jobs for young people are part of the solution, says Sun.

In Tanzania, HIV infection among girls more than triples between 15-19 and 20-24 years.

This fact, says Allison Jenkins, chief of HIV/AIDS with the United Nations Children’s Fund in Dar es Salaam, underlines “the importance of orienting HIV prevention and economic livelihoods interventions during her transition to adulthood.”

For all these reasons, UNAIDS is calling for “a major movement to protect adolescent girls and young women from HIV infection.”