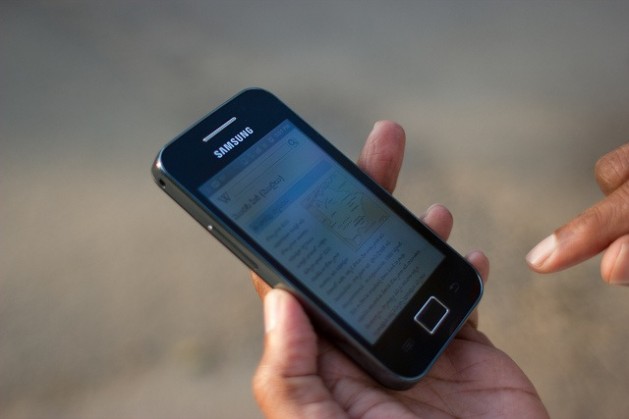 Scores of women in India are downloading and using mobile ‘safety apps’ as a way of guarding against rape. Credit: vgrigas/CC-BY-SA-2.0

NEW DELHI, Nov 14 2014 (IPS) - It was 9:45 pm when 23-year-old Manira Chaudhury, a final-year Master’s student in New Delhi, who was traveling home in a rickshaw, pressed a button on her smart phone that sent out emergency alerts to two of her closest friends.

“I am safe,” Chaudhury assured her distressed friends. “I was just checking that the app works.”

She uses VithU, a mobile phone app developed by Channel V, which was launched in November last year in India in the aftermath of the horrific rape-murder of a 23-year-old paramedical student in a moving bus in the Indian capital on Dec. 16, 2012.

The smart phone app is activated by tapping twice on an icon on the screen, which instantly sends the following message to pre-loaded emergency contacts: ‘I am in danger. I need help. Please follow my location’, along with details of the sender’s whereabouts.

“Fortunately I have never faced a situation where I felt the need to use it,” Chaudhury tells IPS. “But I think it is important to have it. I don’t think girls should have to live in constant fear of an attack but at the same time we cannot live in denial.

“We know bad things are happening out there and it’s wise to take certain precautions,” she explains.

"I don’t think girls should have to live in constant fear of an attack but at the same time we cannot live in denial. We know bad things are happening out there and it’s wise to take certain precautions." -- Manira Chaudhury, a final-year Master’s student in New Delhi
While dime-a-dozen safety apps are now available in India, mostly launched by mobile phone companies and other private groups, the Government of India plans to launch a safety app of its own later this month, as an auxiliary service to the existing 181 helpline for women, which was started after the fatal Delhi bus rape.

“This new app will also facilitate pre-registering of crimes based on perceived threats,” says Khadijah Faruqui, a women’s rights activist and human rights lawyer who is heading the 181 Helpline.

Safety apps are just one of many responses to the 2012 gang rape, which sparked massive protests around this country of 1.2 billion, with scores of people taking to the streets to demand tougher laws, increased security measures, sensitization of the police force and stronger government action to tackle sexual violence against women.

Lawmakers and politicians responded to the tragedy by pushing out the Criminal Law Amendment Ordinance, 2013, which incorporates various sexual crimes into the penal code, and promises stiffer penalties for offenses such as stalking, voyeurism or harassment.

The government also established six new fast-track courts to hear rape cases, and experts say there has been an explosion in public debate about women’s safety.

Still, millions of women continue to live in fear, while the frequency and brutality of rapes appears unchanged despite tougher laws.

The latest figures provided by India’s National Crime Records Bureau (NCRB) in 2012 point to 24,923 rapes per year, while police reports from various cities show an alarming rise in assaults in 2013-2014.

India’s financial hub, Mumbai, which used to be considered a safe place for women, witnessed a 43-percent rise in the number of reported rapes this year compared to the previous year, according to the city’s police.

An abundance of apps

Against this backdrop, many women have welcomed the rise in innovative solutions to the constant threat of sexual violence.

For instance, Microsoft India recently released the safety application called ‘Guardian’ for Windows phones, which allows users to select a ‘track me’ feature that enables friends and family to follow the person in real-time using cloud services, among others.

The app also comes with an SOS alert function and a feature that allows the user to record evidence of an attack.

According to Microsoft-IT India Managing Director Raj Biyani, “It is a robust personal security app with more safety features and capabilities than any other comparable app available to Indian smart phone users today.”

Then there is Circle of 6, which won the 2011 Apps Against Abuse challenge sponsored by the Obama Administration and works by offering users a number of icons that send the user’s selected ‘circle’ messages for help, interruption, or advice.

Originally designed to guard against date rapes in the United States, the app’s developers saw a 1,000-percent rise in the number of downloads in India after the Nirbhaya tragedy, prompting them to translate the app into Hindi and tailor it to fit the Indian context.

According to Circle of 6–New Delhi, the app has been programmed in both English and Hindi and it has been designed in a gender-neutral manner.

Says Nancy Schwartzman, a representative of the team who created Circle of 6, “Administrations should make Circle of 6 a priority and should invest in the future of safety with this technology. Circle of 6 is […] a smart and efficient way to centralize both social and emergency communications.”

The app creators said the hotlines have been pre-programmed so that they are in sync with the 24/7 women’s hotline of New Delhi and the women counseling and support service run by the NGO Jagori.

A user of the app, who feels uneasy to contact the police, can also reach out to the Lawyer’s Collective, a leading public interest legal service provider.

Government gets on board

Taking its cue from private initiatives by IT firms and advocacy groups, the government is now pouring resources into the issue of women’s safety.

Under former Prime Minister Manmohan Singh, the finance ministry approved proposals aimed at streamlining police, mobile and legal services in the country, resulting in the creation of a fund worth one trillion rupees (about 16 billion dollars) to be used exclusively on projects aimed at enhancing women’s safety.

The ministry of information technology also plans to issue instructions to all mobile phone manufacturers to introduce a mandatory SOS alert button to all handsets.

The scheme will be launched in 157 cities in two phases.

Yet another project – known in its initial stage as ‘design and development of an affordable electronic personal safety device’ – being undertaken by the Indian Institute of Technology (IIT) aims to roll out a self-contained safety system in the form of a wristwatch.

India’s ministry of road transport and highways has proposed a scheme that will cover 32 towns, each with a population of over one million people, where public transportation vehicles will be fitted with GPS tracking devices to enhance law enforcement’s ability to respond to attacks.

Still, an app alone cannot solve the massive problem of violence against women in India, with an average of 57 cases of rape reported every day, according to an analysis of government data by the Commonwealth Human Rights Initiative (CHRI).

According to Jasmeen Patheja, founder of a student-led project at the Srishti School of Art, Design and Technology in Bangalore known as Blank Noise, the “solution is not in the app itself, but its function and role and space for intervention.”

But Rimi B. Chatterjee, a writer and activist based in Kolkata who also teaches English in the prestigious Jadavpur University, which is leading a viral protest against the molestation of a girl student on campus in September this year, is skeptical about the effectiveness of the apps.

“I am personally not sure about their efficacy and I fear that they can actually be launched by companies to bank on the insecurity of women to make money. So I have never advised my students to use them,” says Chatterjee.

“The solution to women’s safety is in the counselling and training of men and not in development of apps. The problem is not with the women, it lies with men and their mindset, as young men are learning to disrespect women from their seniors,” she says.

However, according to Faruqui, an app like the one to be launched in connection with the 181 Helpline on Nov. 25, on the International Day for the Elimination of Violence against Women, the aim will be to address the gaps in the existing apps and ensure that a woman in distress can find timely assistance.