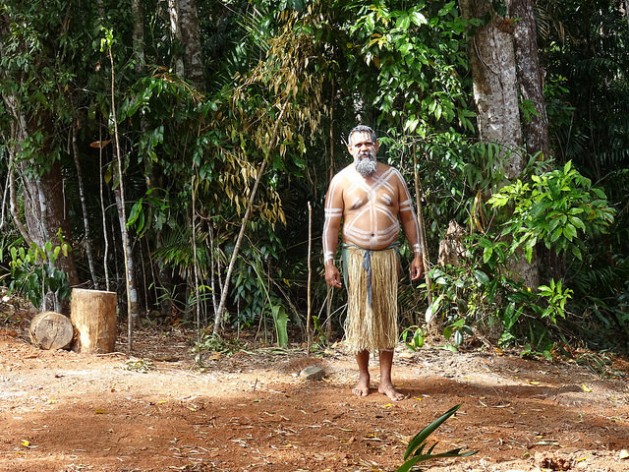 William Clark Enoch of Queensland. Aboriginal and Torres Strait Islander people, who comprise only 2.5 per cent of Australia’s nearly 24 million population, are part of the oldest continuing culture in the world. Credit: Neena Bhandari/IPS

CAIRNS, Queensland, Dec 17 2014 (IPS) - As a child growing up in Far North Queensland, William Clark Enoch would know the crabs were on the bite when certain trees blossomed, but now, at age 51, he is noticing visible changes in his environment such as frequent storms, soil erosion, salinity in fresh water and ocean acidification.

“The land cannot support us anymore. The flowering cycles are less predictable. We have to now go much further into the sea to catch fish,” said Enoch, whose father was from North Stradbroke Island, home to the Noonuccal, Nughie and Goenpul Aboriginal people.

"Our communities don't have to rely on handouts from mining companies, we can power our homes with the sun and the wind, and build economies based on caring for communities, land and culture that is central to our identity." -- Kelly Mackenzie

Aboriginal and Torres Strait Islander people, who comprise only 2.5 per cent (548,400) of Australia’s nearly 24 million population, are part of the oldest continuing culture in the world. They have lived in harmony with the land for generations.

“But now pesticides from sugarcane and banana farms are getting washed into the rivers and sea and ending up in the food chain. We need to check the wild pig and turtles we kill for contaminants before eating,” Enoch told IPS.

With soaring temperatures and rising sea levels, indigenous people face the risk of being further disadvantaged and potentially dislocated from their traditional lands.

“We have already seen environmental refugees in this country during the Second World War. In the 1940s, Torres Strait Islander people were removed from the low-lying Saibai Island near New Guinea to the Australian mainland as king tides flooded the island”, said Mick Gooda, Aboriginal and Torres Strait Islander Social Justice Commissioner at the Australian Human Rights Commission.

For indigenous people, their heart and soul belongs to the land of their ancestors. “Any dislocation has dramatic effects on our social and emotional wellbeing. Maybe these are some of the reasons why we are seeing great increases in self-harm,” Gooda, who is a descendant of the Gangulu people from the Dawson Valley in central Queensland, told IPS.

Displacement from the land also significantly impacts on culture, health, and access to food and water resources. Water has been very important for Aboriginal people for 60,000 years, but Australia is becoming hotter and drier.

“On the other side, during the wet season, it is getting wetter. One small town, Mission Beach in Queensland, recently received 300mm of rain in one night. These extreme climatic changes in the wet tropics are definitely impacting on Indigenous lifestyle,” said Gooda.

Researchers warn that climate change will have a range of negative impacts on liveability of communities, cultural practices, health and wellbeing.

Dr. Rosemary Hill, a research scientist at the Commonwealth Scientific and Industrial Research Organisation (Ecosystem Sciences) in Cairns said, “The existing poor state of infrastructure in indigenous communities such as housing, water, energy, sewerage, and roads is likely to further deteriorate. Chronic health disabilities, including asthma, cardiovascular illness and infections, and water, air and food-borne diseases are likely to be exacerbated.”

Environmental and Indigenous groups are urging the government to create new partnerships with indigenous Australians in climate adaptation and mitigation policies and also to tap into indigenous knowledge of natural resource management.

“There is so much we can learn from our ancestors about tackling climate change and protecting country. We have to transition Australia to clean energy and leave fossil fuels in the ground. Our communities don’t have to rely on handouts from mining companies, we can power our homes with the sun and the wind, and build economies based on caring for communities, land and culture that is central to our identity,” says the Australian Youth Climate Coalition (AYCC) communications director, Kelly Mackenzie.

AYCC is calling on the Australian government to move beyond fossil fuels to clean and renewable energy.

According to a new analysis by Climate Action Tracker (CAT), Australia’s emissions are set to increase to more than 50 per cent above 1990 levels by 2020 under the current Liberal-National Coalition Government’s climate policies.

The Copenhagen pledge (cutting emissions by five per cent below 2000 levels by 2020), even if fully achieved, would allow emissions to be 26 per cent above 1990 levels of energy and industry global greenhouse gases (GHGs).

It is to be noted that coal is Australia’s second largest export, catering to around 30 per cent of the world’s coal trade. Prime Minister Tony Abbott has declared that coal is good for humanity. His government has dumped the carbon tax and it is scaling back the renewable energy target.

The United Nations Intergovernmental Panel on Climate Change (IPCC) in its fifth and final report has said that use of renewable energy needs to increase from 30 per cent to 80 per cent of the world’s energy supply.

With the predicted change in sea level, traditional hunting and fishing will be lost across significant areas. A number of indigenous communities live in low-lying areas near wetlands, estuaries and river systems. The Girringun Aboriginal Corporation and Gudjuda Aboriginal Reference Group together represent custodians of about a third of the Great Barrier Reef.

Elaine Price, a 58-year-old Olkola woman who hails from Cape York, would like more job opportunities in sustainable industries and ecotourism for her people closer to home.

“Our younger generation is losing the knowledge of indigenous plants and birds. This knowledge is vital to preserving and protecting our ecosystem,” she said.