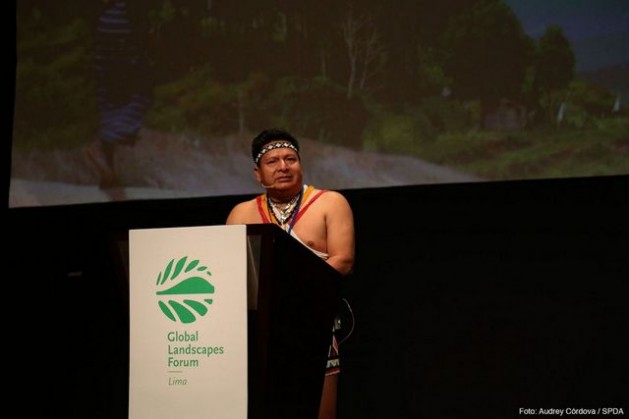 Cándido Menzúa Salazar, national coordinator of the indigenous peoples of Panama, addressed the audience at the Global Landscapes Forum, the largest side event at COP 20 in Lima, on how climate change altered his agroforestry practices. Credit: Audry Córdova/COP20 Lima

LIMA, Dec 12 2014 (IPS) - The magnitude of the climate changes brought about by global warming and the alterations in rainfall patterns are modifying the geography of food production in the tropics, warned participants at the climate summit in the Peruvian capital.

That was the main concern among experts in food security taking part in the 20th session of the Conference of the Parties (COP20) to the United Nations Framework Convention on Climate Change (UNFCCC), held Dec. 1-12 in Lima. They are worried about rising food prices if tropical countries fail to take prompt action to adapt.

The International Food Policy Research Institute (IFPRI estimates that climate change will trigger food price hikes of up to 30 percent.

The countryside is the first sector directly affected by climate change, said Andy Jarvis, a researcher at the International Centre for Tropical Agriculture (CIAT) who specialises in low-carbon farming in the CGIAR Research Programme for Climate Change, Agriculture and Food Security.

“Climate and agriculture go hand in hand and it’s the climate that defines whether a crop will do well or poorly. The geography of where crops grow is going to change, and the impacts can be extremely negative if nothing is done,” Jarvis told Tierramérica during the Global Landscapes Forum, the biggest parallel event to the COP20.

Crops like coffee, cacao and beans are especially vulnerable to drastic temperatures and scarce rainfall and can suffer huge losses as a result of changing climate patterns.

One example: In the Sacred Valley of the Incas in Peru, where the greatest biodiversity of potatoes can be found, higher temperatures and spreading crop diseases and pests are forcing indigenous farmers to grow potatoes at higher and higher altitudes. Potato farmers in the area could see a 15 to 30 percent reduction in rainfall by 2030, according to ClimateWire.

Another illustration: In Central American countries like Costa Rica, Guatemala and Honduras, a fungus called coffee rust is decimating crops.

The outbreak has already caused one billion dollars in losses in Central America in the last two years, and 53 percent of coffee plantations in the area are at risk, according to the International Coffee Organisation (ICO).

Latin America produces 13 percent of the world’s cacao and there is an international effort to preserve diversity of the crop in the Americas from witches’ broom disease, which can also be aggravated by extreme climate conditions.

At the same time, switching to cacao can be a strategy for coffee farmers when temperatures are not favourable to coffee production, according to the CGIAR consortium of international agricultural research centres. 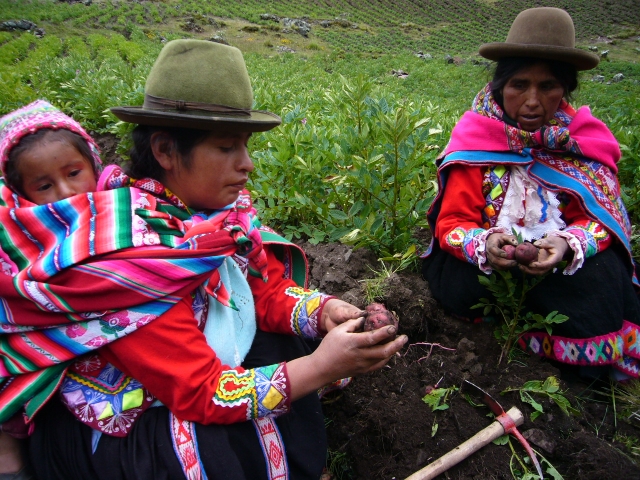 Regina Illamarca and Natividad Pilco, two farmers preserving potato biodiversity in Huama, a community in the department of Cusco, in the Peruvian Andes, and whose crops are being altered by global warming. Credit: Milagros Salazar/IPS

“At the COP, the idea discussed is to keep global warming below two degrees Celsius, as the most optimistic goal,” Jarvis told Tierramérica. “But that practically implies the total displacement of the coffee-growing zone. Two degrees will be too hot. The current trends indicate that prices are going to soar. As production drops and supply shrinks, prices go up. The impact would also lead to a rise in poverty.”

In Nicaragua, where coffee is a pillar of the economy, a two degree increase in temperatures would lead to the loss of 80 percent of the current coffee-growing area, he said.

According to a CIAT study, “by 2050 coffee growing areas will move approximately 300 metres up the altitudinal gradient and push farmers at lower altitudes out of coffee production, increase pressure on forests and natural resources in higher altitudes and jeopardise the actors along the coffee supply chain.”

As the climate heats up, crops that now grow at a maximum altitude of 1,600 metres will climb even higher, which would affect the subsistence of half a million small farmers and agricultural workers, according to the United States Agency for International Development (USAID).

The U.N. Food and Agriculture Organisation Assistant Director-General for Forestry Eduardo Rojas said at COP20 that climate change is already endangering the food security, incomes and livelihoods of the most vulnerable families.

“Resilient agriculture is more environmental because it doesn’t use nitrogenous fertilisers. But no matter how much we do, there are systemic limits. We could reach a limit as to how much agriculture can adapt,” he told Tierramérica.

Rojas called for an integral focus on landscapes in the context of climate change, to confront the challenge of ensuring adequate nutrition for the 805 million chronically malnourished people around the world. However, agricultural production will at the same time have to rise 60 percent to meet demand.

The executive director of the U.S.-based Earth Innovation Institute, Daniel Nepstad, noted that the largest proportion of land available for food production is in the tropics.

“The growth in demand for food, especially, in the emerging economies is going to outpace the rise in production. The countries in the world with the greatest potential are in Latin America,” said Nepstad, who added that the innovations to mitigate the impact of climate change on food are happening mainly outside the scope of the UNFCCC.

“The main reason forests are disappearing in this region is agriculture, it is the expansion of commercial agriculture,” he told Tierramérica. “We have a lot of research going on that seeks more resilient and more producing varieties of different crops and livestock. We call it climate-smart agriculture. There is a lot of political commitment to reduce deforestation and direct the investments in agriculture in different ways. However it seems that agriculture is still outside the negotiations in the COP itself.”

As well as agroforestry techniques, agricultural weather report services with forecasts of up to four to six months are ways to contribute to adaptation to changing climate patterns.

CIAT’s Jarvis argued for the need for the diversification of crops and the increase in support with policies to support agriculture.

This article was originally published by the Latin American network of newspapers Tierramérica.