Anantha Duraiappah is Director of the UNESCO / Mahatma Gandhi Institute of Education for Peace and Sustainable Development in New Delhi & Director of the Inclusive Wealth Report, a collaboration of the UN Environment Programme and UN University. 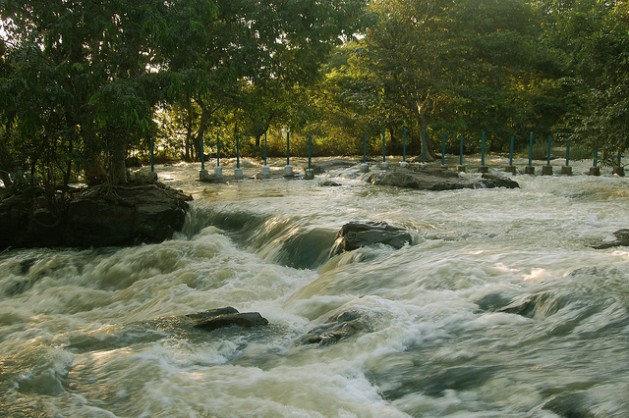 Mismanagement of India’s vast river system has caused severe water stress in urban and rural landscapes, with many water bodies too polluted for human use. Credit: Malini Shankar/IPS

NEW DELHI, Dec 19 2014 (IPS) - Virtually all countries use Gross Domestic Product (GDP) as their primary measurement of economic progress and overall societal progress. At the same time, countries express allegiance to the doctrine of sustainable development. This exposes an obvious disconnect.

GDP measures the value of all the goods and services a country produces. Thus, maximising production is the best way of achieving high GDP. And increasing production is fine as long as it is within one’s means to maintain that production.

But relate this in terms of personal spending patterns: our list of desirables are seemingly infinite –- the majority of us have insatiable appetites constrained only by personal budgets.

You can increase your spending by taking on debt, but this too is determined by your ability to pay. We are constrained!

At the country level, the situation is no different. A nation can’t produce goods and services without the required assets. It can borrow or buy from other countries but again, consumption is constrained by an ability to pay, which in a well-behaving market is determined by national assets.

Granted, the system of national accounts upon which GDP is computed tracks changes in capital assets such as infrastructure, transport and communications, among other types of national capital produced.

But the skills and education of people determine a country’s output. So too do natural assets, like land, minerals, fossil fuels, and forests, and the many other goods and services nature offers as direct production inputs.

Where are these assets accounted for in GDP?

The Inclusive Wealth Report, first introduced at the Rio+20 summit and welcomed by The Economist magazine as an ambitious effort, provides fresh insights.

This year’s second edition, IWR2014, created in a collaboration with the UN Environment Programme and the UN University, provides a comprehensive analysis of 140 countries, up from 20 two years ago. And the results are sobering, to say the least.

A key factor, according to the report: a lack of effort in promoting creativity and innovation, primarily in developed countries.

As well, the 2014 report further substantiates an earlier finding: Human capital in a country’s asset base is most highly valued by policymakers, followed by natural capital. Produced capital comes in third.

What does this mean?

Using a combination of market prices, when appropriate, and social prices when no market prices are available or are imperfect, the data shows people in most countries place highest value on human capital, key to which is education.

This is followed by natural capital — energy sources and timber, for example — but also the many ecosystem services nature provides to humankind.

Using these values, the IWR2014 report finds that the produced capital our national accounts help to track and manage only represents 18 percent of the total value of a country’s asset base.

In other words, some 82 percent of a nation’s productive base — its “inclusive” wealth — is not reflected in national accounts. This simply makes no economic sense. And, as the popular saying goes, “you manage what you measure.”

Let’s build momentum to revise the system of national accounts, expanding it to include education and natural resources as part of the core accounts.

While there has been some movement to develop satellite accounts for these categories, the scale of their contribution to the asset base of an economy makes it imperative that they be an integral part of core accounts. They can no longer be treated as externalities.

Developing inclusive wealth accounts is complex and challenging, involving some strong assumptions and projections of the future flows of existing asset bases for our offspring and theirs. Despite this degree of uncertainty, initial reactions from national statisticians have been positive.

The former prime minister of India, Manmohan Singh, a prominent economist, established a high level panel under his national statistics office and the intellectual leadership of Cambridge economist Sir Partha Dasgupta to explore the development of inclusive wealth accounts.

The initial report was a innovative and intellectually robust national document identifying possible actions over the short, medium and long terms.

If a country such as India with its myriad challenges can acknowledge such a need, every country can embrace the challenge and start to revise its system of national accounts.