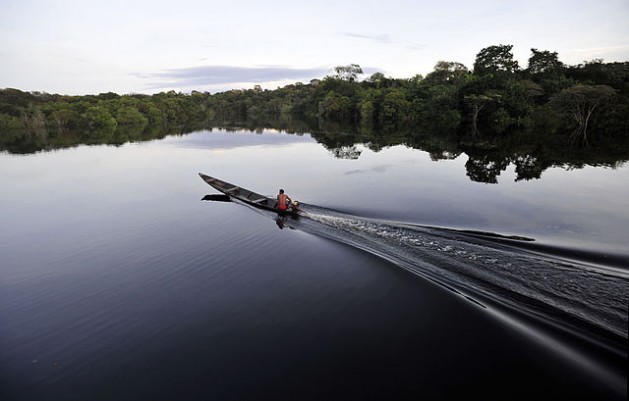 Dawn on the border of the Juma Reserve in the Brazilian Amazon. Activists say some new conservation policies are undermining traditional approaches to forest management and alienating forest-dwellers from their traditional activities. Credit: Neil Palmer (CIAT)/cc by 2.0

BERKELEY, California, Dec 18 2014 (IPS) - Dercy Teles de Carvalho Cunha is a rubber-tapper and union organiser from the state of Acre in the heart of the Brazilian Amazon, with a lifelong love of the forest from which she earns her livelihood – and she is deeply confounded by what her government and policymakers around the world call “the green economy.”

“The primary impact of green economy projects is the loss of all rights that people have as citizens,” says Teles de Carvalho Cunha in a report released last week by a group of Brazilian NGOs. “They lose all control of their lands, they can no longer practice traditional agriculture, and they can no longer engage in their everyday activities.”

The whole concept fails to appreciate that it is industrial polluters in rich countries, not peasant farmers in poor countries, who most need to reduce their climate impacts.

Referring to a state-run programme called the “Bolsa Verde” that pays forest dwellers a small monthly stipend in exchange for a commitment not to damage the forest through subsistence activities, Teles de Carvalho Cunha says, “Now people just receive small grants to watch the forest, unable to do anything. This essentially strips their lives of meaning. ”

Her words are especially chilling because Teles de Carvalho Cunha is not just any rubber tapper – she is the president of the Rural Workers Union of Xapuri – the union made famous in Brazil when its founder, Chico Mendes, was murdered in 1988 for defending the forest against loggers and ranchers.

Mendes’ gains have been consolidated in tens of thousands of hectares of ‘extractive reserves,’ where communities earn a living from harvesting natural rubber from the forest while keeping the trees standing. But new policies and programmes being established to conserve forests in Acre seem to be having perverse results that the iconic leader’s union is none too happy about.

Conflicting views on the green economy

As Brazil has become a leader in fighting deforestation through a mix of  public and private sector actions, Acre has become known for market-based climate policies such as Payment for Environmental Services (PES) and Reducing Emissions from Deforestation and Forest Degradation (REDD) schemes, that seek to harmonise economic development and environmental preservation.

Over the past decade, Acre has put into place policies favouring sustainable rural production and taxes and credits to support rural livelihoods. In 2010, the state began implementing a system of forest conservation incentives that proponents say have “begun to pay off abundantly”.

Especially as the United Nations Framework Convention on Climate Change continues to fail in its mission of bringing nations together around a binding emissions reduction target – the latest failure being COP20 in Lima earlier this month – REDD proponents highlight the value of “subnational” approaches to REDD based on agreements between states and provinces, rather than nations.

The approach is best represented by an agreement between the states of California, Chiapas (Mexico), and Acre (Brazil).

California policymakers have been meeting with officials from Acre, and from Chiapas, for several years, with hopes of making a partnership work, but the agreement has yet to attain the status of law.

Attempts by the government of Chiapas to implement a version of REDD in 2011, shortly after the agreement with California was signed, met strong resistance in that famously rebellious Mexican state, leading organisations there to send a series of letters to CARB and California Governor Jerry Brown asking them to cease and desist.

Groups in Acre, too, sent an open letter to California officials in 2013, denouncing the effort as “neocolonial,”:  “Once again,” the letter read, “the former colonial powers are seeking to invest in an activity that represents the ‘theft’ of yet another ‘raw material’ from the territories of the peoples of the South: the ‘carbon reserves’ in their forests.”

This view appears to be backed up now by a  new report on the Green Economy  from the Brazilian Platform for Human, Economic, Social, Cultural and Environmental Rights. The 26-page summary of a much larger set of findings to be published in 2015 describes Acre as a state suffering extreme inequality, deepened by a lack of information about green economy projects, which results in communities being coerced to accept “top-down” proposals as substitutes for a lack of public policies to address basic needs.

The Earth Innovation Institute, a strong backer of REDD generally and of the Acre-Chiapas-California agreement specifically, has thoroughly documented Brazil’s deforestation success, and argues that existing incentives – farmers’ fear of losing access to markets or public finance or of being punished by green public policies – have been powerful motivators, but need to be accompanied by economic incentives that reward sustainable land-use.

But the testimonies from Acre raise concerns that such economic incentives can deepen existing inequalities. The Bolsa Verde programme is a case in point: according to Teles de Carvalho Cunha, the payments are paltry, the enforcement criminalises already-impoverished peasants, and the whole concept fails to appreciate that it is industrial polluters in rich countries, not peasant farmers in poor countries, who most need to reduce their climate impacts.

A related impact of purely economic incentives is to undermine traditional approaches to forest management and to alienate forest-dwellers from their traditional activities.

“We don’t see land as income,” one anonymous indigenous informant to the Acre report said. “Our bond with the land is sacred because it is where we come from and where we will return.”

Another indigenous leader from Acre, Ninawa Huni Kui of the Huni Kui Federation, appeared at the United Nations climate summit in Lima, Peru this month to explain his people’s opposition to REDD for having divided and co-opted indigenous leaders; preventing communities from practicing traditional livelihood activities; and violating the Huni Kui’s right to Free, Prior and Informed Consents as guaranteed by Convention 169 of the International Labor Organization.

The project, designed to conserve 35,000 hectares of forest, is jointly run by the U.S.-based Carbonfund.org Foundation and a Brazilian company called Carbon Securities. The project is certified by the two leading REDD certifiers, the Verified Carbon Standard (VCS) and the Climate, Community, Biodiversity Standard (CCBS).

But despite meeting apparently high standards for social and environmental credibility, field research detected “the community’s lack of understanding of the project, as well as divisions in the community and an escalation of conflicts.”

One rubber tapper who makes his living within the project area told researchers, “I want someone to explain to me what carbon is, because all I know is that this carbon isn’t any good to us. It’s no use to us. They’re removing it from here to take it to the U.S… They will sell it there and walk all over us. And us? What are we going to do? They’re going to make money, but we won’t?”

A second project called the Russas/Valparaiso project, seems to suffer similar discrepancies between what proponents describe and what local communities experience, characterised by researchers as “fears regarding land use, uncertainty about the future, suspicion about land ownership issues, and threats of expulsion.”

The company’s apparent failure to leave a copy of the project contract with the community did not help to build trust. Like the Purus Project – and like many REDD projects in other parts of the world whose track record of social engagement is severely lacking – this project is also on the road to certification by VCS and CCB.

Concerns like criminalising subsistence livelihoods and asserting private control over community forest resources, whether these resources be timber or CO2, is more than a misstep of a poorly implemented policy – it violates human rights conventions that Brazil has ratified, as well as national policies such as Brazil’s National Policy for the Sustainable Development of Traditional Peoples and Communities.

The report’s conclusion sums up its findings: “In the territories they have historically occupied, forest peoples are excluded from decisions about their own future or—of even greater concern – they are considered obstacles to development and progress. As such, green economy policies can also be described as a way of integrating them into the dominant system of production and consumption.

“Yet, perhaps what is needed is the exact opposite – sociocultural diversity and guaranteeing the rights of the peoples are, by far, the best and most sustainable way of slowing down and confronting not only climate change, but also the entire crisis of civilization that is threatening the human life on the planet.”