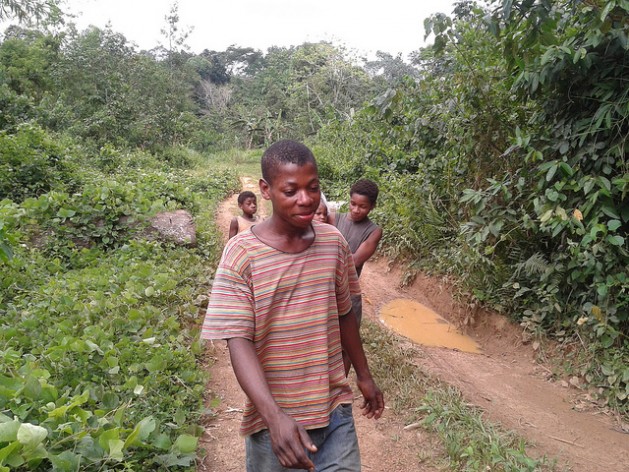 WASHINGTON, Dec 9 2014 (IPS) - Just half of major global banks have in place a public policy to respect human rights, according to new research, despite this being a foundational mandate of an international convention on multinational business practice.

Further, of the 32 global banks examined, researchers found that none has publicly put in place a process to deal with human rights abuses, if identified. None has even created grievance mechanisms by which those impacted by potential abuses can complain to the banks.

“The findings of this report are quite sobering about what can be expected from self-regulatory principles.” -- Aldo Caliari

The findings, published by BankTrack, an international network of watchdog groups, come three and a half years after the adoption of the United Nations Guiding Principles on Business and Human Rights. These principles, unanimously endorsed by the U.N. Human Rights Council in 2011, specify a range of actions and obligations for all businesses, including the financial sector.

Yet banks have a unique role in underwriting nearly all of the business activity around the globe, even as they are typically shielded from the impacts of those investments.

“Policies and processes, open to public scrutiny and backed by adequate reporting, are important tools for banks to ensure that these kinds of abuses do not happen, and that where they do, those whose rights have been impacted have the right to effective remedy … If these policies and procedures are to be meaningful, the finance for such ‘dodgy deals’ must eventually dry up.”

One of the banks studied in the new report, JPMorgan Chase, is one of the leading U.S. financiers of palm oil, through loans and equity investments. While the bank does have a human rights policy, BankTrack’s researchers find this policy applies only to loans, not investments.

“When it comes to reporting on implementation, the bank falls flat, making the policy little more than window-dressing,” Jeff Conant, an international forests campaigner with Friends of the Earth U.S., a watchdog group that is working on palm-oil financing, told IPS.

“We’ve spoken with JPMorgan Chase about the need to give impacted people an opportunity to file complaints about the human rights impacts of its financing, with the belief that this is a first step towards accountability. Frankly, from the bank’s response, I don’t see them stepping up anytime soon.”

According to the new study, a few banks appear to be well on their way to conformity with the Guiding Principles. The top-ranked institution, the Dutch Rabobank, received a score of eight out of 12, with Credit Suisse and UBS close behind.

These are the exceptions, however. Against a set of 12 criteria, the average score was only a three.

Many scored at or near zero. While those ranked at the very bottom include several Chinese institutions, they also include banks in the European Union and the United States.

Indeed, Bank of America, one of the largest financial institutions in the world, scored just 0.5 out of 12, receiving a minor bump for having expressed some commitment to carrying out human rights-related due diligence. (The bank failed to respond to request for comment for this story by deadline.)

“The findings of this report are quite sobering about what can be expected from self-regulatory principles,” Aldo Caliari, the director of the Rethinking Bretton Woods Project at the Center of Concern, a Washington think tank, told IPS.

“The Guiding Principles are the bare minimum of any human rights framework in the corporate sector, a framework that has the companies’ consent. So the fact that there is so little [adherence to] such a relatively weak tool, where every effort to court corporations’ support has been made, is, indeed, very telling.”

Despite the spectrum of findings on implementation, the financial services industry as a whole has taken note of the Guiding Principles.

In 2011, four European banks met to discuss the principles’ potential implications for the sector. Three more banks eventually joined what is now called the Thun Group, and in October 2013 the grouping released an initial paper on the results of these discussions, including recommendations for compliance.

“To date, banks’ efforts to implement the UN Guiding Principles have mainly revolved around producing discussion papers on the best way forward,” Ryan Brightwell, the new report’s author, said in a statement.

“BankTrack has welcomed these discussions, but some three and a half years on from the launch of these Principles, it is time to move onto implementation.”

The new findings on lagging implementation will strengthen arguments from those who want to tweak or supplant the Guiding Principles. Some suggest, for instance, that the framework be changed to treat financial institutions differently from other sectors.

“[T]he financial sector requires an exceptional treatment when it comes to the application of the Guiding Principles,” the Center of Concern’s Caliari wrote last year in comments for the Working Group on Business and Human Rights.

“Financial companies, more than other companies, have the potential, with their change of behaviour, to influence the behaviour of other actors. That means they also should be upheld to a greater level of responsibility when they fail to do so.”

Caliari and others are also part of a movement to move beyond voluntary frameworks such as the Guiding Principles (at least in their current form), and instead to see through the creation of a binding mechanism.

This decades-long effort received a significant boost in June, when the U.N. Human Rights Council voted to allow negotiations to begin toward a binding treaty around transnational companies and their human rights obligations. (This same session also approved a popular second resolution, aimed instead at strengthening implementation of the Guiding Principles process.)

The new data on banks’ relative lack of compliance with the Guiding Principles, Caliari says, is one of the reasons the call for a legally binding treaty “has been gaining ground.”

He continues: “It is increasingly clear that mechanisms that rely on the consent of the companies cannot be the total of available accountability mechanisms. More is needed.”