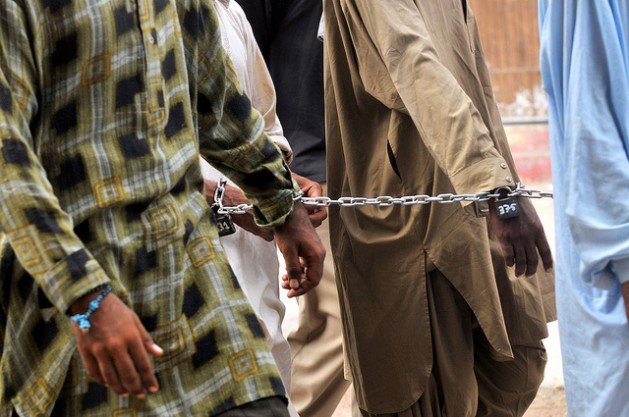 Seven of 39 detainees who were subject to the most aggressive interrogation techniques provided no intelligence at all, while information obtained from the others preceded the harsh treatment, according to the report. Credit: Fahim Siddiqi/IPS

WASHINGTON, Dec 10 2014 (IPS) - Tuesday’s release by the Senate Intelligence Committee of its long-awaited report on the torture by the Central Intelligence Agency (CIA) of detainees in the so-called “war on terror” does not go far enough, according to major U.S. human rights groups.

While welcoming the report’s release, the subject of months of intensive negotiations and sometimes furious negotiations between the Senate Committee’s majority and both the CIA and the administration of President Barack Obama, the groups said additional steps were needed to ensure that U.S. officials never again engage in the kind of torture detailed in the report.

"Their actions destroyed trust in clinicians, undermined the integrity of their professions, and damaged the United States’ human rights record, which can only be corrected through accountability." -- Donna McKay of PHR

“This should be the beginning of a process, not the end,” said Anthony Romero, executive director of the American Civil Liberties Union (ACLU). “The report should shock President Obama and Congress into action, to make sure that torture and cruelty are never used again.”

He called, among other steps, for the appointment of a special prosecutor to hold the “architects and perpetrators” of what the George W. Bush administration called “enhanced interrogation techniques” (EITs) accountable and for Congress to assert its control over the CIA, “which in this report sounds more like a rogue paramilitary group than the intelligence gathering agency that it’s supposed to be.”

He was joined by London-based Amnesty International which noted that the declassified information provided in the report constituted “a reminder to the world of the utter failure of the USA to end the impunity enjoyed by those who authorised and used torture and other ill-treatment.

“This is a wake-up call to the USA; they must disclose the full truth about the human rights violations, hold perpetrators accountable and ensure justice for the victims,” said Amnesty’s Latin America director, Erika Guevara.

The Senate Committee’s report, actually a 524-page, partially-redacted summary of a still-classified 6,300-page report on the treatment of at least 119 terrorist suspects detained in secret locations overseas, accused the CIA not only of engaging in torture that was “brutal and far worse” than has previously been reported, but also of regularly misleading the White House and Congress both about what it was doing and the purported value of the intelligence it derived from those practices.

Water-boarding, for example, was used against detainees more often and in more of the CIA’s “black sites” than previously known; sleep deprivation was used for up to a week at a time against some suspects; others received “rectal feeding” or “hydration’; and still others were forced to stand on broken feet or legs.

In at least one case, a detainee was frozen to death; in the case of Abu Zubayda, an alleged “high-value” Al Qaeda detainee who was subject to dozens of water-boardings, the treatment was so brutal, several CIA officers asked to be transferred if it did not stop.

While the CIA officers and former Bush administration officials, notably former Vice President Dick Cheney, have long insisted that key information – including intelligence that eventually led to the killing of Osama bin Laden — was obtained from EITs, the report concluded that these techniques were ineffective.

Seven of 39 detainees who were subject to the most aggressive EITs provided no intelligence at all, while information obtained from the others preceded the harsh treatment, according to the report, which relied on the CIA’s own cables and reports.

In some cases, detainees subjected to EITs gave misinformation about “terrorist threats” which did not actually exist, the report found. Of the 119 known detainees subject to EITs, at least 26 should never have been held, it said.

Intelligence Committee Chairwoman Dianne Feinstein, who fought hard for months to release the report over the CIA’s fierce objections, wrote in its Forward that, in the aftermath of the 9/11 Al Qaeda attacks, “she could understand the CIA’s impulse to consider the use of every possible tool to gather intelligence and remove terrorists from the battlefield, and CIA was encouraged by political leaders and the public to do whatever it could to prevent another attack.”

“Nevertheless, such pressure, fear and expectation of further terrorist plots do not justify, temper or excuse improper actions taken by individuals or organizations in the name of national security,” according to Feinstein.

For his part, CIA director John Brennan, a career CIA officer appointed by Obama whose role in the Bush administration’s detention programme remains cloudy, “acknowledge(d) that the detention and interrogation program had shortcomings and that the Agency made mistakes.”

“The most serious problems occurred early on and stemmed from the fact that the Agency was unprepared and lacked the core competencies required to carry out an unprecedented, worldwide program of detaining and interrogating suspected al-Qa’ida and affiliated terrorists.”

But he also defended the EITs, insisting that “interrogations of detainees on whom EITs were used did produce intelligence that helped thwart attack plans, capture terrorists, and save lives.” A fact sheet released by the CIA claimed, as an example, that one detainee, after undergoing EITs, identified bin Laden’s courier, which subsequently led the CIA to the Al Qaeda chief’s location.

With several notable exceptions, Republicans also defended the CIA and the Bush administration’s orders to permit EITs. Indeed, the Intelligence Committee’s Republican members released a minority report that noted that the majority of staff had not interviewed any CIA officers directly involved in the programme.

“There is no reason whatsoever for this report to ever be published,” said the Committee’s ranking Republican, Sen. Saxby Chambliss. “This is purely a partisan tactic” which he said was designed to attack the Bush administration. Republicans also warned that the report’s release would endanger U.S. service personnel and citizens abroad by fuelling anti-American sentiment, especially in the Muslim world.

But Sen. John McCain, who was himself tortured as a prisoner of war in the Vietnam war, defended the report, calling it “a thorough and thoughtful study of practices that I believe not only failed their purpose …but actually damaged our security interests, as well as our reputation as a force for good in the world.”

McCain has championed efforts to pass legislation outlawing torture, particularly because Obama’s 2009 executive orders prohibiting such practices could be reversed by a future president.

Passage of such a law – whose prospects appear virtually nil in light of Republican control of both houses of Congress for the next two years – is one of the demands, along with release of the full report, of most human-rights groups here.

“The Obama administration and Congress should work together to build a durable consensus against torture by pursuing legislation that demonstrates bipartisan unity and fidelity to our ideals,” said Elisa Massimino, director of Human Rights First.

Many groups, however, want Obama to go further by prosecuting those responsible for the EIT programme, a step that his administration made clear from the outset it was loathe to do.

“We renew our demand for accountability for those individuals responsible for the CIA torture programme,” said Baher Azmy, the legal director of the Center for Constitutional Rights, which has represented a number of detainees at Guantanamo, including Abu Zubaydah, in U.S. courts. “They should be prosecuted in U.S. courts; and, if our government continues to refuse to hold them accountable, they must be pursued internationally under principles of universal jurisdiction.”

“The report shows the repeated claims that harsh measures were needed to protect Americans are utter fiction,” according to Human Rights Watch executive director Kenneth Roth. “Unless this important truth-telling process leads to prosecution of the officials responsible, torture will remain a ‘policy option’ for future presidents.”

Noting that health professionals, including doctors and psychologists also played a role in the EITs, Physicians for Human Rights (PHR) also called for legal accountability. “For more than a decade, the U.S. government has been lying about its use of torture,” said Donna McKay, PHR’s executive director.

“The report confirms that health professionals used their skills to break the minds and bodies of detainees. Their actions destroyed trust in clinicians, undermined the integrity of their professions, and damaged the United States’ human rights record, which can only be corrected through accountability,” she said.