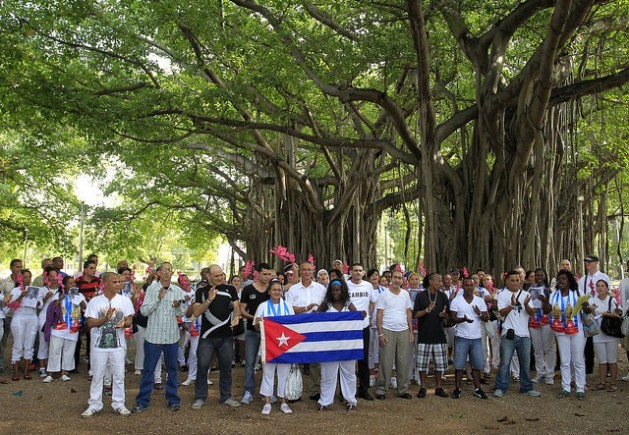 Several Cuban dissidents released at the start of the year, standing in front of other opponents of the Cuban government, including Bertha Soler (second to the right, in the second row), the leader of the organisation Ladies in White. Credit: Jorge Luis Baños/IPS

HAVANA, Jan 19 2015 (IPS) - Cuba has decided to move ahead in its talks with the European Union towards an agreement on cooperation parallel to the negotiations aimed at normalising relations with the United States after more than half a century of hostility.

As everyone’s attention is focused on the start of talks this week to restore diplomatic ties between Cuba and the United States, Brussels and Havana scheduled for Mar. 4-5 the third round of negotiations launched in late April 2014 in the Cuban capital.

“We first thought we had slipped down a bit on the list of priorities; now the message is that no, the Cuban state wants to keep a balance between the two processes, which is good news for us,” the EU ambassador in Havana, Herman Portocarero, told IPS.

Delegations from Cuba and the United States will meet Jan. 21-22 in Havana, in the first meeting since the two governments announced Dec. 17 that diplomatic relations would be reestablished, and since sweeping new measures to ease trade and travel between the two countries were presented by Washington on Jan. 15.

In a process that got underway in 2008, Cuba and the EU finally held their first round of talks Apr. 29-30 for a future bilateral accord on political dialogue and cooperation which, according to Portocarero, should define aspects like the role of civil society and the main issues involving long-term cooperation.

Cuba is the only Latin American country that lacks a cooperation agreement with the EU.

A second meeting was held in August in Brussels, and on Jan. 8-9 the Cuban and EU delegations were to sit down together for the third time. But in early December the meeting was postponed by the Cuban authorities, with no new date scheduled, apparently solely due to a busy agenda.

After a year during which Cuba strengthened its relations with the rest of Latin America and the Caribbean and with traditional allies like China and Russia, and which ended with the historic announcement of a thaw with Washington, Havana will now be in a different position in its negotiations with Brussels.

The main aim of Cuban diplomacy in this case is to push for more trade, but above all for an increase in capital inflows under the new law on foreign investment.

The European bloc is currently Cuba’s second trading partner after Venezuela, whose economic difficulties raise doubts about what will happen to its wide-ranging trade ties with this Caribbean island nation. In 2013, according to the latest available figures, Cuba’s imports from Europe totalled 2.12 billion dollars and exports amounted to 971 million dollars.

According to analysts, the government of Raúl Castro hopes that a stable relationship under a framework accord like the one sought with the 28-member European bloc will lead to increased trade, but also to the diversification of economic and trade ties given the possibility that the normalisation of relations with the United States will lead to the lifting of the half-century U.S. embargo.

Portocarero believes Cuba’s new relationship with its northern neighbour will accelerate all of the processes. “If the Cuban authorities want to maintain a balance so that not everything is monopolised through the United States, then they have to give us the attention we deserve,” he said.

Brussels is observing with concern that some of the measures announced by the United States favour its financial sector, while Europe’s remains subject to enormous fines because of the extra-territorial reach of the Helms Burton Act, which in 2006 codified Washington’s sanctions against Cuba, and can only be repealed by the U.S. Congress.

“It is an imbalance that we have to put on the table with our friends in the United States,” Portocarero said in an interview with IPS. “It is not acceptable for us to continue to be subject to sanctions and huge fines against Europe’s financial sector, while restrictions are removed in the case of the U.S.”

The EU, for its part, hopes for faster changes in Cuba. “My message has always been: move faster while you are in control, so as to better defend the good things that should be preserved,” the ambassador said. In his view, moves should also be made to make Cuba’s foreign investment law more attractive. 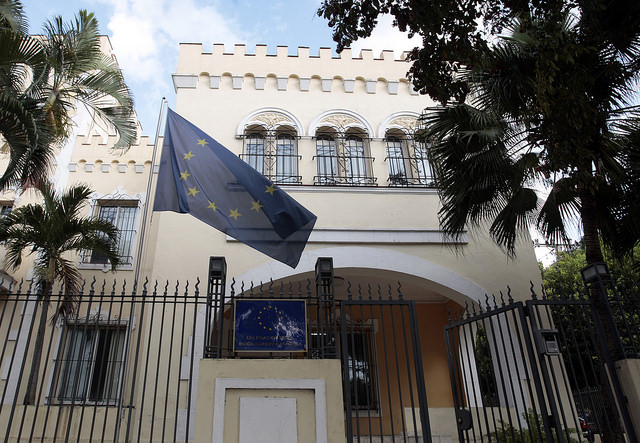 The EU delegation building in Havana. The Cuban government will restart talks towards a bilateral agreement on cooperation in March. Credit: Jorge Luis Baños

“Foreign investment is competitive and special zones [like Cuba’s Mariel special economic development zone] are everywhere. At this point, 30 percent of the foreign capital invested in Cuba comes from the European Union,” he said.

Cuba has indicated that to ensure the normal growth of its economy, it needs some 2.5 billion dollars a year in investment.

The Mariel special economic development zone, which covers 465 square km 45 km west of Havana, has a modern port terminal built with investment from Brazil, and areas for a broad range of productive activities open to foreign investment.

The questions of foreign trade and cooperation made up the working agenda in the first and second round of talks, although no final documents have yet been produced. Human rights, civil society and good governance are to be discussed in the third round in March, although they are also crosscutting issues that arise in other areas.

These are touchy subjects for the Cuban government, which does not accept being internationally judged regarding them, while they are concerns raised by both Brussels and Washington.

Castro has stated that he is willing to engage in respectful, reciprocal dialogue on the discrepancies, including “any issue” regarding Cuba, but also the United States.

Over 50 inmates considered political prisoners by the U.S. government were released in Cuba in the first few days of January. Spokespersons for the Obama administration clarified that human rights would continue to be a focus of discussion in the talks on migration and the normalisation of ties with Havana.

The Cuban delegation in the talks will be headed by the director general of the foreign ministry’s United States division, Josefina Vidal. On Wednesday Jan. 21 a meeting is to be held to assess the progress of the migration accords and the measures taken by both sides to tackle undocumented migration and smuggling of migrants, among other issues.

In the two-day meeting, the U.S. delegation will be led by U.S acting Deputy Assistant Secretary of State for Western Hemisphere Affairs Edward Alex Lee. The 1994 and 1995 migration accords are reviewed every six months, in meetings that rotate between Cuba and the United States.

Bilateral issues will be addressed later that day, including cooperation in areas of mutual interest. The U.S. representatives in these two meetings will be led by U.S. Assistant Secretary of State for Western Hemisphere Affairs Roberta Jacobson.