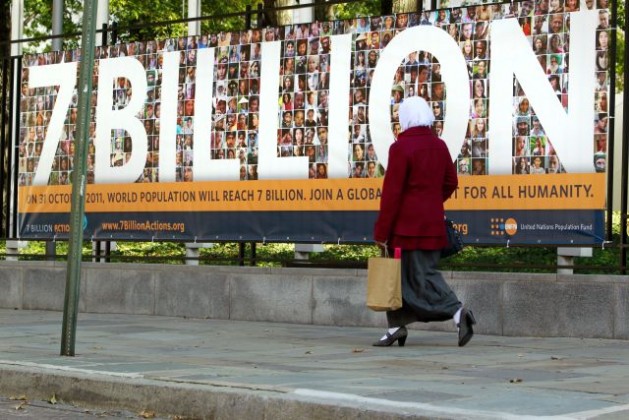 The world's population reached 7 billion on Oct. 31, 2011. Pictured near an entrance to UN Headquarters is a banner for a global campaign by the UN Population Fund (UNFPA) to build awareness of the opportunities and challenges posed by this milestone. Credit: UN Photo/Rick Bajornas

UNITED NATIONS, Feb 25 2015 (IPS) - As the international community marks the 70th anniversary of the founding of the United Nations, one question worthy of some reflection is: Is world population better or worse off demographically since the establishment of the U.N.?

Some contend that the demography of today’s world population is markedly better than it was seven decades ago. Others argue that humanity is definitely worse off demographically and still others – often sceptics and cynics – feel it is neither better nor worse, but just different.

To consider the merits of those various perspectives and distinguish between personal opinions and measurable facts, it is useful and appropriate to dispassionately examine some fundamental demographic changes that have occurred to world population since the middle of the 20th century.

Perhaps the most visible demographic change is the increased size of world population, which now at 7.3 billion is five billion larger than at the time of the U.N.’s founding.

While world population has more than tripled in size, considerable variation has taken place across regions. Some populations, such as those in sub-Saharan Africa and Western Asia, have increased 500 percent or more over the past seven decades.

In contrast, other populations, such as those in Europe, increased by 40 percent or less over that time span.

The growth of world population, around 1.8 percent per year at mid 20th century, peaked at 2.1 percent in the late 1960s. The current annual rate of global population growth is 1.1 percent, the lowest since the U.N.’s founding.

In terms of absolute numbers, world population was adding approximately 47 million per year in 1950. The annual increase nearly doubled to a peak of 91 million in the late 1980s and then began declining to its current level of 81 million.

An important consequence of the differential rates of demographic growth globally has been the shift in the geographic distribution of world population. Whereas 70 years ago about one-third of world population resided in more developed regions, today that proportion is about half that level or 17 percent.

Also noteworthy are the regional demographic shifts that have occurred. For example, while Europe and Africa at mid 20th century accounted for 22 percent and 8 percent of world population, respectively, their current proportions are 10 percent for Europe and 16 percent for Africa.

Perhaps the most welcomed demographic change in world population that has taken place is the decline in mortality levels, including infant, child and maternal death rates.

During the past 70 years, the global infant mortality rate fell from approximately 140 to 40 infant deaths per 1,000 live births. The improvements in mortality across all age groups have resulted in an average life expectancy at birth for the world of 70 years, a gain of some 25 years since 1950.

Another remarkable transformation in world population over the past seven decades is the decline in fertility.

As a result of men and women gaining unprecedented control over the number, spacing and timing of their children, global fertility has decreased significantly from an average of about 5 births per woman at mid-20th century to 2.5 births per woman today.

In addition, the elderly proportion aged 80 years or older has tripled during this time period, increasing from about 0.5 to 1.6 percent.

The sex composition of world population has been relatively balanced and stable over the recent past, with a global sex ratio of around 100 -102 males for every 100 females.

Although slightly more boys are born than girls, many countries, especially the more developed, have more females than males due to lower female mortality rates.

Notable exceptions to that general pattern are China and India, whose population sex ratios are approximately 107 males per 100 females due in part to sex-selective abortion of female fetuses.

Whereas the sex ratio at birth of most countries is around 105 males per 100 females, it is 117 in China and 111 in India, markedly higher than their ratios in the past.

Increased urbanisation is another significant demographic transformation in world population. A literal revolution in urban living has occurred across the planet during the past seven decades.

Whereas a minority of world population, 30 percent, lived in urban areas in 1950, today the majority of the world, 54 percent, consists of urban dwellers. The migration to urban places took place across all regions, with many historically rural, less developed countries, such as China, Indonesia, Iran and Turkey, rapidly transformed to predominantly urban societies.

Another striking demographic change in world population is the emergence of mega-cities — agglomerations of 10 million or more inhabitants. In 1950, there was a single city in this category: New York, with 12.3 million inhabitants.

Today there are 28 mega-cities, with Tokyo being the largest at 38 million inhabitants, followed by Delhi with 25 million, Shanghai with 23 million and Mexico City, Mumbai and San Paulo each with approximately 21 million.

In addition to internal movements within nations, international migration across countries and regions has also increased markedly over the past decades. A half-century ago 77 million or nearly 3 percent of world population were immigrants, meaning they live in a place different from their place of birth. That figure has tripled to 232 million, representing slightly more than 3 percent of world population.

While most of the international migration is lawful, increasing numbers of men, women and children are choosing due to circumstance and desire to immigrate outside legal channels.

And while precise figures of migrants unlawfully resident are difficult to establish, the total number worldwide is estimated at least 50 million.

The numbers of refugees have also increased substantially during the recent past. At mid-20th century, an estimated one million people remained uprooted following the world war.

Also, the total number of people forced to flee their homes due to conflict, which includes refugees, asylum seekers and internal displaced persons, has reached 51.2 million, the first time it has exceeded 50 million since the World War II.

From the above discussion, most would probably agree that while some aspects of world population are clearly better today than 70 years ago, others are not necessarily better and still others are decidedly worse.

Lower mortality rates and people living longer lives are certainly welcomed improvements. Men and women having the ability to decide more easily and freely the number, spacing and timing of births has also been an advance.

The logical consequence of lower mortality and fertility is population aging, a remarkable achievement that will, however, require major societal adjustments.

The scale of refugees and internally displaced person is plainly worse than a half century ago. The growing numbers and difficult circumstances of those fleeing their homes are unlikely to improve in the near future given the increasing political upheaval, ongoing civil conflicts and deteriorating economic conditions in many parts of the world.

Finally, the unprecedented growth of world population – the most rapid in human history –added about 5 billion more people since the mid 20th century.

The recent declines in world population growth provide some indication of future demographic stabilisation or peaking, perhaps as early as the close of the 21st century.

At that time, would population is expected to be about 10 billion, 2.5 billion more than today or four times as many people as were living on the planet when the United Nations was founded.