Argentina Moves Towards Marriage of Convenience with China 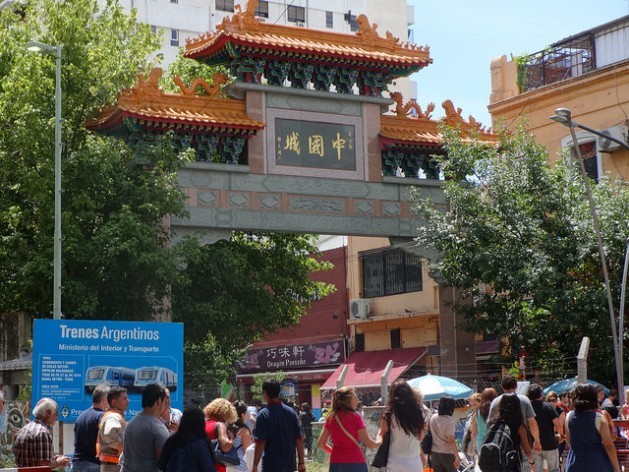 The entrance to Chinatown in Buenos Aires, where a sign promotes the renovation of Argentina’s railways, partly financed by Beijing. Credit: Fabiana Frayssinet/IPS

BUENOS AIRES, Feb 23 2015 (IPS) - The government of Argentina is building a marriage of convenience with China, which some see as uneven and others see as an indispensable alliance for a new level of insertion in the global economy.

The process forms part of a radical change with respect to Argentina’s diplomacy, which years back involved ties with the United States described as “carnal relations.”

President Cristina Fernández called the new relationship with China an “integral strategic alliance,” after signing a package of 22 agreements with Chinese leader Xi Jinping in Beijing on Feb. 4.

The accords include areas like space technology, mining, energy, financing, livestock and cultural matters. They cover the construction of two nuclear and two hydropower plants, considered key to this country’s goal of energy self-sufficiency.

“Although they are important, the new agreements and others that were signed earlier are insufficient to gauge the dimension of the bilateral commitment,” said Jorge Castro, the director of the Strategic Planning Institute and an expert on China.

“For Argentina, the relationship with China has elements that are essential for insertion into the international system of the 21st century, along with other countries of the South, headed by Brazil,” he told IPS.

“These ties are between the new fulcrum of the global economy, China-Asia, and Argentina as a nation and as a regional unit,” he said.

Castro pointed out that Asia’s giant is currently South America’s leading trade partner, due to the volume of its purchases of raw materials, which implies a level of interdependence given that “China has placed the food security of its population in the hands of South American countries.”

In the case of Argentina, China is its second-largest trading partner, after neighbouring Brazil – displacing long-time partners like the United States and European countries.

In 2014, exports to China totalled five billion dollars while imports stood at 10.8 billion dollars – a bilateral record which represented 11.5 percent of this country’s trade balance, according to Argentina’s Chamber of Commerce.

Prior accords that cemented the alliance

Before Fernández’s visit to China, the two countries had already signed investment agreements in strategic sectors, such as the one between China’s Sinopec and Argentina’s YPF, two state-owned oil companies, for the exploitation of one of the Loma Campana deposits of unconventional oil and gas resources in Vaca Muerta in southern Argentina.

There was also an accord for China to provide some 2.5 billion dollars in financing for the reconstruction of the railway of the Belgrano Cargas y Logística company, which will transport Argentine and Brazilian agricultural products to Chilean ports on the Pacific ocean.

“The investment agreements with China are important to the extent that they facilitate the conditions to continue generating, for example, the infrastructure for development that Argentina needs, in a scenario” of a shortage of foreign currency, economist Fernanda Vallejos told IPS. 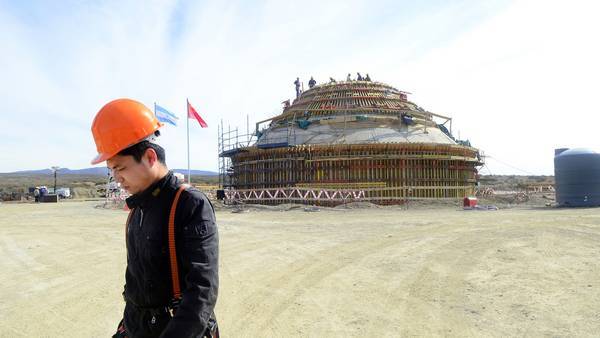 The Chinese space station under construction in the southern Argentine province of Neuquén, rejected by the political opposition of all stripes and social groups. Credit: Courtesy of DesarrolloyDefensa

In July 2014, Argentina reached an 11 billion dollar currency swap agreement with China, to shore up this country’s weakened foreign reserves, of which it received one billion dollars in December.

The swap “has been a very powerful instrument,” which is added to measures by the government and the Central Bank to promote exchange stability and help slow down inflation, said Vallejos, a member of a group that advises the Ministry of the Economy and Public Finance.

Sectors of the business community are critical of the alliance with Beijing, such as the Argentine Industrial Union (UIA) or the Chamber of Exports, which sounded a warning about the asymmetrical nature of the relationship.

This country’s exports to China are only half of what it imports from the Asian giant, and they are basically raw materials or farm products. A full 75 percent is soy or by-products.

The UIA said the framework agreement on economic cooperation and investment, signed in July 2014 and pending final approval by the legislature, “contains clauses that pose an enormous risk to Argentina’s development.”

“Over the last decade, China’s strategy has pursued two central objectives: to consolidate its transnational companies in global value chains and to obtain commodities and inputs with little value-added, for its growing productive and employment needs,” the UIA said in a communiqué.

“In free trade agreements in this era of globalisation, the essential thing is not trade but investment,” said Castro, who questioned the concept of “asymmetry” and backed the agreement with China.

The China expert said the relationship should be analysed in a broader context. For example, by remembering that in the next 10 years, China’s foreign direct investment is estimated to climb to 1.1 trillion dollars.

“The question is how to manage to be part of China’s flow of investment in industry in the next 10 to 20 years,” Castro said.

The UIA agrees that it is important to be part of that current, but with allocations that would not harm local goods and services, which have no chance of receiving Chinese financing, the business chamber said.

The UIA and some trade unions also worry that Chinese labour power, which is included in several projects, will displace local workers.

“Don’t worry, we continue to defend Argentine workers and the business community’s participation,” said centre-left President Fernández, who urged those sectors to engage in technical discussions about the accords.

Some in Argentina see the China of the 21st century as the new England of the 19th century or the United States of the 20th century, in terms of economic and territorial hegemony and domination.

They also question the construction of a Chinese space tracking and control station in the southern Argentine province of Neuquén, which according to the government will monitor, control and gather data as part of China’s programme of missions to explore the moon and outer space.

Raúl Dobrusin, an opposition legislator from Neuquén, told IPS that the agreement, which grants China the use of 200 hectares for 50 years and is opposed by left-wing groups and social organisations, did not go through the Neuquén provincial legislature, which was not informed of the details of the accord.

So far there is no Chinese military presence in the construction project, said Dobrusin, but in his view, the space station poses “major geopolitical risks.”

“If there is a confrontation between powerful nations, we will be a place to be taken into account by the enemies of China…In short, we are getting into an area where the possibility of deciding whether or not to participate in conflicts is no longer a sovereign decision, they won’t ask us,” he warned.

“The alliance transcends economic matters and forms part of the search for independence, on both the economic and political fronts, which makes it possible to reach economic and social development goals, by breaking the yoke of neoliberalism and the empire-dependence logic,” said Vallejos.

China, in her view, “is far from the voracity of the Western powers…It is part of a new global order that is struggling to be born, where the role of emerging countries is no longer one of colonialism but of assuming the position of builders of our own destiny,” said the economist.

“That does not mean that China isn’t obtaining benefits from its ties with our nations, but that it is possible to build a win-win relationship for all of the parties involved,” she said.