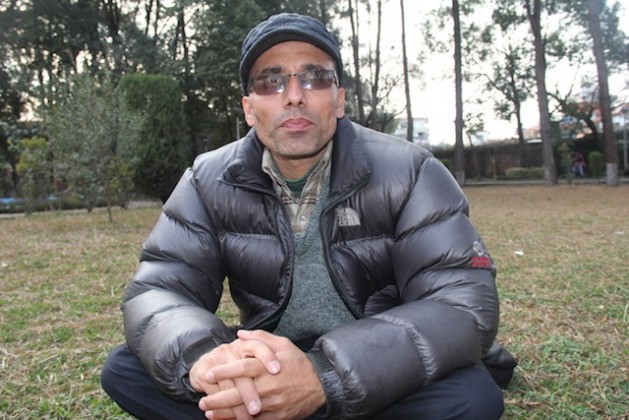 Suman Adhikari, son of Muktinath Adhikari, a school principal who was killed by Maoist rebels during Nepal’s People’s War, says his family is still waiting for justice to be served. Credit: Renu Kshetry/IPS

KATHMANDU, Feb 24 2015 (IPS) - The picture of Muktinath Adhikari, principal of Pandini Sanskrit Secondary School in the Lamjung district of west Nepal who was killed during the country’s decade-long civil conflict, became an iconic portrayal of the brutality of the bloody ‘People’s War’.

The then Communist Party of Nepal (Maoist), which waged a 10-year-long armed struggle, killed Adhikari in 2002 after he refused to ‘donate’ 25 percent of his salary to the cause and attend functions organised by the rebels.

"The consultation, ownership, and participation of conflict victims are a must for the successful completion of the transition to justice." -- Suman Adhikari, son of Muktinath Adhikari, a school principal who was killed by Maoist rebels during Nepal’s People’s War
“Our life changed drastically for the worse after my father was killed; the memory of him being killed with his hands tied behind his back still haunts us,” recalls Suman Adhikari, the slain teacher’s son. “We want justice to move on with our life.”

Eight years after the war ended, Nepal’s newly formed Truth and Reconciliation Commission (TRC) and the Commission to Investigate Enforced Disappearances (CIED) will now take up the case of the Adhikari family, and thousands of others like them who are still waiting for closure.

Originally agreed upon during the signing of the 12-point understanding between the then CPN (M) and the Seven Party Alliance – which includes the current ruling Nepali Congress (NC) and Communist Party of Nepal (Unified Marxist Leninist) – and reaffirmed during the signing of the 2006 Comprehensive Peace Agreement (CPA), these commissions have been a long time coming.

According to records kept by the Informal Sector Services Centre (INSEC), a non-governmental organisation, 13,236 people were killed during the Maoist insurgency, while the International Committee of the Red Cross (ICRC) has recorded more than 1,350 cases of disappearances that are yet to be accounted for.

Both the TRC and CIED have been given the mandate to probe serious violations of human rights during the armed conflict, investigate the status of those missing and create an atmosphere for reconciliation in Nepali society.

Many hope that a robust reconciliation process will also give the country an economic boost, including improving the lives of the 25 percent of its 27-million strong population that lives below the poverty line.

However, rights activists have criticised the TRC Act for falling short of international standards, while several prominent groups fear that unaddressed criticisms could derail the process altogether.

International rights groups such as Amnesty International, Human Rights Watch and the International Commission of Jurists have joined local activists in voicing grave concern that the TRC Act fails to uphold Nepal’s commitments under international law – namely, the possibility of granting amnesty for war crimes.

Statements released by the watchdog groups echo fears voiced by locals that flaws in the Act could leave thousands out of the reconciliation process.

Others are disgruntled about the lack of consultation prior to appointing members of the TRC.

Mohana Ansari, spokesperson of the National Human Rights Commission (NHRC), is unhappy that the TRC recommendation committee did not pay heed to the names suggested by the NHRC. “The culture of impunity should not be encouraged at any cost,” she stressed.

Others fear that a flawed TRC Act could lead to “forced reconciliation”, with survivors compelled to go along with a process that does not represent their best interests.

Surya Kiran Gurung, the newly appointed Chairperson of the TRC, is also sceptical about the Commission’s mandate.

“There is a need for amendments to the TRC Act because it is not clear what will happen to those cases that have been filed and investigated in court,” Gurung told IPS. “Parallel jurisdiction can create problems later on.”

However, he was confident that the TRC would recommend amendments to its Act in order to ensure consensus and consent of victims in the reconciliation process. He was similarly aware of the need to bridge the river of mistrust between survivors of the conflict and the commission.

“We will to reach out to them even if they are not willing to come forward,” he said.

Despite Gurung’s optimism, 53-year-old Kalyan Budhathoki of the Ramechap district in central Nepal is not as hopeful.

He, along with his 35-member extended family, fled their village in 2000 when rebels threatened to kill them and seized property after he refused to pay a “donation” of one million Nepali rupees.

“Why are these culprits roaming freely and why has no action been taken against those selling our cattle and seizing our property?” asked Budhathoki, a supporter of the ruling Nepali Congress (NC) who now works as a daily wage labourer in Kathmandu. “We are yet to feel the presence of law and order in the country.”

Thousands of futures at stake

The Ministry of Peace and Reconstruction formed a task force in 2006 to collect data on the dead, displaced, disabled, and those who suffered property damage during the war.

Available records indicate that of the 79,571 internally displaced persons (IDPs), only about 25,000 had received relief funds from the government and returned to their homes by October 2013.

According to the Relief and Rehabilitation Unit of the Ministry, a total of 14,201 families who lost their kin have received relief, while families of 1,528 missing people have availed themselves of government aid amounting to 100,000 rupees (about 1,000 dollars) each.

“Local leaders who are not conflict victims have been receiving compensation and relief packages by submitting fake documents and exercising political influence,” alleged Budhathoki. “In this situation, how could we believe that the TRC, with its members picked by the political parties, will not be biased?”

Rights activists too believe that political parties have reached an understanding on the controversial provision of granting blanket amnesty, even for those allegedly involved in serious rights violations.

Some politicians have offered the view that penalizing perpetrators will hinder the peace and reconciliation effort.

However, TRC Chairperson Gurung is confident that the Commission’s work will not be affected by political interference. “We will strictly abide by the TRC mandate of finding the truth and investigating the war-era issues,” he said.

He stressed that there would be public hearings that are expected to bring all manner of atrocities to light, after which the country can begin to move ahead with the reconciliation process.

Those like Suman Adhikari, however, believe the process will not go far without the active participation of those affected. “The consultation, ownership, and participation of conflict victims are a must for the successful completion of the transition to justice,” he told IPS.