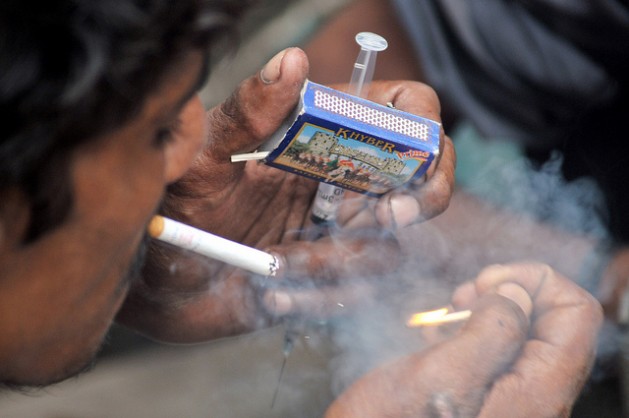 Less than eight per cent of drug users worldwide have access to a clean syringe programme. Credit: Fahim Siddiqi/IPS

UNITED NATIONS, Feb 26 2015 (IPS) - As the call for the decriminalisation of drugs steadily picks up steam worldwide, a new study by a British charity concludes there has been no significant reduction in the global use of illicit drugs since the creation of three key U.N. anti-drug conventions, the first of which came into force over half a century ago.

“Illicit drugs are now purer, cheaper, and more widely used than ever,” says the report, titled Casualties of War: How the War on Drugs is Harming the World’s Poorest, released Thursday by the London-based Health Poverty Action.

"This approach hasn’t reduced drug use or managed to control the illicit drug trade. Instead, it keeps drugs profitable and cartels powerful." -- Catherine Martin of Health Poverty Action

The study also cites an opinion poll that shows more than eight in 10 Britons believe the war on drugs cannot be won. And over half favour legalising or decriminalising at least some illicit drugs.

But over the last few decades, several countries have either decriminalised drugs, either fully or partially, or adopted liberal drug laws, including the use of marijuana for medical reasons.

These countries include the Netherlands, Portugal, Czech Republic, Uruguay, Argentina, Brazil, Colombia, Guatemala, Ecuador, Honduras and Mexico, among others.

According to the report, the governments of Mexico, Colombia and Guatemala seek open, evidence-based discussion on U.N. drugs policy reform.

And “both the World Health Organisation (WHO) and UNAIDS not only share this view, but have called for the decriminalisation of drugs use.”

Asked if the United Nations was doing enough in the battle against drugs, Catherine Martin, policy officer at Health Poverty Action, told IPS, “The problem is that the U.N. is doing too much of the wrong things, and not enough of the right things.”

She pointed out that an estimated 100 billion dollars worldwide is poured into drug law enforcement every year, driven by U.N. conventions on drug control.

“However, this approach hasn’t reduced drug use or managed to control the illicit drug trade. Instead, it keeps drugs profitable and cartels powerful (fuelling corruption); spurs violent conflict and human rights violations; and disproportionately punishes small-scale drug producers and people who use drugs,” she added.

The charity urges the UK development sector to demand pro-poor moves as nations prepare for the U.N. general assembly’s special session on drugs next year.

Many non-governmental organisations (NGOs), including British groups, have no lead contact or set process for participating in the session, says the report.

The report claims many small-scale farmers grow and trade drugs in developing countries as their only income source.

And punitive drug policies penalise farmers who do not have access to the land, sufficient resources and infrastructure that they would need to make a sustainable living from other crops.

Alternative crops or development programmes often fail farmers, because they are led by security concerns and ignore poor communities’ needs, the report notes.

The charity argues the militarisation of the war on drugs has triggered and been used to justify murder, mass imprisonment and systematic human rights violations.

The report stresses that criminalising drugs does not reduce use, but spreads disease, deters people from seeking medical treatment and leads to policies that exclude millions of people from vital pain relief.

In West Africa, people with conditions linked to cancer and AIDS face severe restrictions in access to pain relief drugs, amid feared diversion to illicit markets, according to the study.

Low and middle-income countries have 90 per cent of AIDS patients around the globe and half of the world’s people with cancer, but use only six per cent of morphine given for pain management.

Health Poverty Action states the war on drugs criminalises the poor, and women are worst hit, through disproportionate imprisonment and the loss of livelihoods.

Asked what the U.N.’s focus should be, Martin told IPS the world body should focus on evidence-based, pro-poor policies that treat illicit drugs as a health issue, not a security matter.

These policies must protect human rights and end the harm that current policies do to the poor and marginalised, she said.

Meanwhile, the report says that drug policy, like climate change or gender, is a cross-cutting issue that affects most aspects of development work: poverty, human rights, health, democracy, the environment.