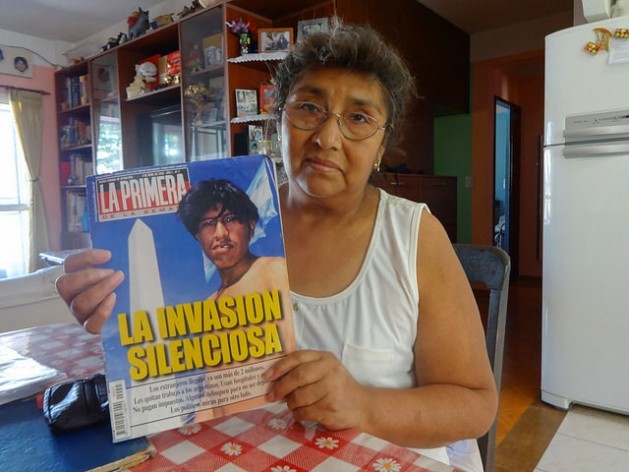 Emiliana Mamani holds up a magazine from the year 2000, which warned of “the silent invasion” of Bolivians in Argentina. The picture was even photoshopped, she said, to make the immigrant look like he was missing a tooth. Credit: Fabiana Frayssinet/IPS

BUENOS AIRES, Feb 13 2015 (IPS) - In the movie “A Day Without a Mexican“, the mysterious disappearance of all Mexicans brings the state of California to a halt. Would the same thing happen in some Latin American countries if immigrants from neighbouring countries, who suffer the same kind of discrimination, went missing?

The response is that the situation is not comparable. But a new report by the Economic Commission for Latin America and the Caribbean (ECLAC), only available in Spanish, shows that intraregional migration flows intensified in the 2000-2010 period, growing at a rate of 3.5 percent a year, while migration to the rest of the world slowed down.

There are 28.5 million Latin Americans living outside their countries, 20.8 million of them in the United States.

And of the 7.6 million immigrants in Latin America, 63 percent are from other countries in this region.

Nor are the strict immigration policies of the United States or Europe comparable with those of Latin America, where regional integration accords have facilitated residency for citizens of neighbouring countries and where “the unilateral and restrictive measures of some developed countries” have been rejected, ECLAC says.

“Above and beyond progress made in legislation regarding equal treatment for immigrants, full rights, and the elimination of restrictions on migration, there are precedents of xenophobia in all societies in the region – from social actors to political groups and the media.” -- Pablo Ceriani

Nevertheless, Pablo Ceriani, an expert on immigration issues from Argentina, said the hypothetical plot of “A Day Without a Latin American in Latin America” could be based on something that this region shares with the United States, which has come in for so much criticism: expressions of xenophobia.

“Above and beyond progress made in legislation regarding equal treatment for immigrants, full rights, and the elimination of restrictions on migration, there are precedents of xenophobia in all societies in the region – from social actors to political groups and the media,” Ceriani, a member of the U.N. Committee on the Protection of the Rights of All Migrant Workers and Members of their Families, told IPS.

“Our region isn’t much different from other regions in terms of the reproduction of myths and false ideas about migration that are not supported by the statistics and which generate an attitude of rejection that stands in the way of progress in creating new laws,” he added.

According to Ceriani, discrimination is notorious in immigration policies like those of Mexico, “which detained 21,500 children last year and deported them to their home countries: Honduras, Nicaragua, El Salvador and Guatemala,” the main sources of intraregional migration to Mexico.

But there are also more subtle examples in countries that have migration agreements, such as the one in force in the Southern Common Market (Mercosur, made up of Argentina, Brazil, Paraguay, Uruguay and Venezuela), which in 2002 established the right to residency for citizens of any of the bloc’s member countries – all they have to do is present an identity document and prove they have no criminal record.

“They bring crime, they bring their customs, they take our jobs…,” said Ceriani, listing some of the xenophobic myths.

Emiliana Mamani, a Bolivian woman who has been living in Argentina for 30 years, knows all about prejudice.

“You always suffer discrimination for ‘having the wrong face’ – there’s this belief that Bolivians take work away from other people,” Mamani, the president of the Madres 27 de Mayo Association and the cooperative of the same name, the first one run here by Bolivian women, told IPS.

Bolivians are the second-most numerous group of intraregional immigrants in Argentina, after Paraguayans. They are followed by Chileans and Peruvians. In this country of 42 million people, there are 1.8 million foreign nationals, 4.5 percent of the population. 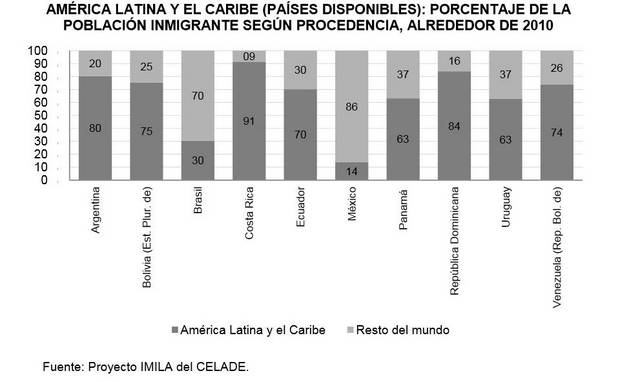 Chart on the percentage of immigrants coming from the rest of the region in 10 Latin American countries, from the ECLAC report “Trends and Patterns in Latin American and Caribbean Migration in 2010 and Challenges for a Regional Agenda”. Credit: Screenshot by IPS

“Sometimes we have to hear ‘why don’t you go back to your country? Don’t come here to act all macho or to be a wise guy. Why don’t you go home, you dirty drunk Bolivian’,” said Mamani, whose cooperative obtained a soft loan from the Housing Institute, which they used to build an apartment building where 12 Bolivian families live.

Mamani has three children – one born in Bolivia and two in Argentina. The two younger ones are now university students, and say they suffered discrimination in primary school, such as questions about why they were taking part in patriotic events.

They have also experienced discrimination in hospitals, even though by law in Argentina all foreign nationals have the right to receive health care, regardless of their migration status.

“In the hospitals sometimes they say the doctor’s not taking any more patients, or they ask us for our documents when they’re not supposed to…but if a blond gringo goes there, like someone from the United States or Europe, they try hard to understand him, even using sign language,” Mamani said.

Immigrants complain of this situation even though Argentina has had a migration law that is very advanced in terms of protection of human rights for 10 years. And since 2006, the situation of 736,000 Bolivian, Brazilian, Chilean, Colombian, Ecuadorian, Paraguayan, Peruvian, Uruguayan and Venezuelan immigrants has been regularised.

Mamani said that efforts to combat discrimination in society should start in the schools, hospitals and other public institutions, “which would seem to be unfamiliar with the migration laws.”

Another focus should be the media, which reproduce stereotypes, she said.

“For example in a robbery, if there’s one Bolivian or Peruvian in a group of Argentines, the media make it a point to say there was a Bolivian who was stealing,” she said.

These deeply-rooted prejudices based on primitive fears of what is “different take a long time to combat,” an official in the national migration office, who asked to remain anonymous, told IPS.

But a perusal of the literature or press reports from that time period clearly shows that there was also discrimination against Spanish, Italian and Portuguese immigrants.

“Stereotypes of them as ‘poor’, ‘ignorant’ or ‘thieves’ gradually faded with time,” Ceriani pointed out.

Both then and now, the decision to move to another country was prompted by the aim of finding a better life.

“All we do is work, work, work. When we decide to pack our bags in our country, the idea is to find work. We don’t come for anything else but to work,” said Mamani, who decided to come to Argentina because a friend told her “that in just one year I would make a lot of money.”

With their work, Bolivians in Argentina add to the country’s wealth, said Ceriani, by bringing, for example, original techniques for planting fruits and vegetables.

And in the textile factories, where they often work in sweatshop conditions, they produce clothing for the most upscale brands.

Paraguayans are widely employed in the construction industry and as domestics. Peruvians often work caring for children, the elderly, and the ill. But many Latin American immigrants are skilled workers or professionals.

Examples in the region abound. In northern Brazil, Haitians are working on the construction of megainfrastructure like dams, or in the mining industry.

In Costa Rica, Nicaraguans form a large part of the workforce in the construction industry, agriculture and domestic service, just as Colombians do in Venezuela.

The increased integration will bring many more examples of unrestricted intraregional circulation of people. But economic growth in some countries and stagnation in others will continue to create discriminatory stereotypes.

Ceriani underscores that migration must be addressed in terms of its structural causes. And that is done, he said, by reducing the social and economic gaps between the countries of Latin America.