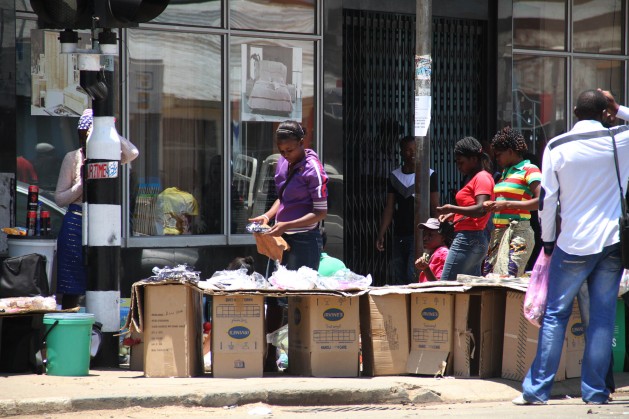 Street vendors in Africa reflect the income inequality that pervades the continent, much of it due to corruption. Credit: Jeffrey Moyo/IPS

HARARE, Feb 21 2015 (IPS) - Reports this year of illicit moneys from African countries stashed in a Swiss bank – indicating that corruption lies behind much of the income inequality that affects the continent – have grabbed international news headlines.

Secret bank accounts in the HSBC’s Swiss private banking arm unearthed this year by the International Consortium of Investigative Journalists (ICIJ) were said to hold over 100 billion dollars, some of which came from Africa, including some of the poorest nations on the continent.

When these funds leave the region, they deny the very nations that need them most.

For example, at least 57 clients of the Swiss HSBC bank associated with Uganda were reported to be worth at least 159 million dollars. The World Bank has estimated that Uganda loses more than 174.5 million dollars in corruption annually.

“Income inequality begins with our political leaders and corrupt wealthy business people who, more often than not, illicitly own the resources of the [African] continent” – Claris Madhuku, Platform for Youth Development, Zimbabwe

It is not a crime for Africans to have a Swiss bank account. But questions are now being raised by local tax offices as to whether the proper taxes were paid on the stashed amounts.

In South Africa, the head of the Revenue Service, Vlok Symington, said his office was analysing the information. “Early indications are that some of these account holders may have utilised their HSBC accounts to evade local and/or international tax obligations,” Symington was reported as saying by the South Africa Sunday Times.

“Income inequality begins with our political leaders and corrupt wealthy business people who, more often than not, illicitly own the resources of the continent,” Claris Madhuku, director of the Platform for Youth Development, a democracy lobby group in Zimbabwe, told IPS.

Diamonds, for example, which have made many traders wealthy, are often mined by the poorest of the poor, treated almost as slaves in war-torn African countries, despite the Kimberley Process Certification Scheme, which was established in 2003 to prevent the flow of these diamonds.

“African countries do not have sound anti-corruption laws and politicians and the rich amass too much power exceeding even the powers of the police here, leaving them with the liberty to accumulate wealth overnight by whatever means without being questioned,” Nadege Kabuga, an independent development expert in Kigali, Rwanda’s capital, told IPS

“It’s shocking how huge banks such as HSBC have created a system for enormously profiteering at the expense of impoverished ordinary people, worse by assisting numerous millionaires from Africa in particular to evade tax payment, disadvantaging the already poor,” Zenzele Manzini, an independent economist based in Mbabane, the capital of Swaziland, told IPS .

“Very often, government directors, ministers and their secretaries are the ones globetrotting on government businesses, awarding themselves huge allowances and the lower government workers remain stuck at the periphery with no extra benefits besides the meagre salaries they get monthly,” a top Zimbabwean government official in the Ministry of Labour, told IPS on the condition of anonymity, afraid of victimisation.

Writing for Financial Transparency Coalition, a global alliance of civil society organisations and governments working to address inequalities in the financial system, Koen Roovers, the coalition’s European Union (EU) Lead Advocate, asked the deeper question: “How do we prevent this in the first place?”

To catch fraud sooner rather than later, capacity in developing countries must be increased, Roovers said. “The scale of the challenge is significant: the UK-based charity Christian Aid has estimated that sub-Saharan Africa would need around 650,000 more tax officials to reach the world average.”

Rich states have promised help to poor countries to build the capacity they need, but these commitments have yet to be honoured.

Without clearly defined measures to curb income inequalities, economists say the African continent may be headed for the worst levels of poverty set to hit even harder at the already poor.

According to Roovers, “criminals and their enablers are creative, so the only way to prevent future scandals is to shed light on what criminals and tax dodgers are trying to hide. This is why online registers of assets for all legal persons and arrangements are necessary and should be publicly available.

“If we turn a blind eye to these loopholes,” he added, “economic development for all will continue to be undermined by illicit actors looking to exploit them.”