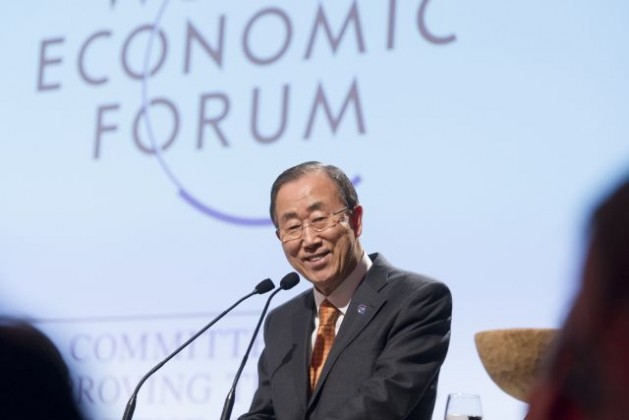 At the same time, the world body is celebrating its 70th anniversary this year while also commemorating the 20th anniversary of the historic Beijing Conference on Women which strengthened gender empowerment worldwide.

"Above all, it is a reminder that the world’s states are acting, as usual, irresponsibly. And that we need a world that functions far better if we are to survive the threats and challenges of the twenty-first century." -- James Paul

In a report titled ‘The Road to Dignity by 2030: Ending Poverty, Transforming All Lives and Protecting the Planet’ released last month, Secretary-General Ban Ki-moon said 2015 is “the time for global action.”

The upcoming events include the Third World Conference on Disaster-Risk Reduction in Sendai, Japan in March; the five-year review of the Nuclear Non-Proliferation (NPT) Treaty in April-May in New York; and the Third International Conference on Financing for Development (FfD) in Addis Ababa in July.

Speaking to reporters last week, the secretary-general singled out three priorities “I have been repeating all the time.”

“We have to do the utmost efforts to meet the targets of the Millennium Development Goals (ending 2015). Then the Member States are working very hard to shape the post-2015 development agenda by September.”

The United Nations will host a special summit of world leaders, Sep. 25 to 27, and “we expect that most of the world leaders will be here and discuss and adopt and declare as their vision to the world, aiming by 2030, Sustainable Development Goals (SDGs),” he added.

And in December this year, he said, “we must have a universal, meaningful climate change agreement” in talks scheduled to take place in Paris.

At each of these “milestones,” he pointed out, “we will continue to be ambitious to end poverty, reduce inequality and exploit the opportunities that accompany the climate challenge.”

As for the 70th anniversary, he said, it will be “an important moment for serious reflection on our achievements and setbacks”.

But Jim Paul, who monitored the United Nations for over 19 years as executive director of the New York-based Global Policy Forum, told IPS he was sceptical of the political hype surrounding the upcoming conferences.

“The United Nations has been trumpeting the global meetings of 2015 as watershed events, but real world expectations are lagging behind the rhetoric of the secretary-general and his team,” he said.

Paul said there are several issues to bear in mind: while the U.N.’s summits address some of the world’s most pressing issues, powerful member states like the United States usually seek to weaken the events and prevent strong outcomes.

This trend was already visible in the 1990s, the golden decade of U.N. summits, when Washington began to insist that summits were too “expensive” and reached too far, said Paul, a onetime lecturer and assistant professor of political science at Empire State College in the State University of New York system.

“That policy reached its most extreme form in the run-up to the summit of 2005, when the U.S. insisted on a massive, last-minute re-working of the agreed text, but it can be found in many other cases before and since,” he said.

Paul pointed out that powerful states, the U.S. first and foremost, do not like to be limited by U.N.-based decisions.

Second, there is the problem of the lack of binding outcomes to these global events.

He said grand aspirations are often expressed in the outcome documents, and the word “binding” is sometimes used, but all participants know that the outcome will remain aspirational – not tough, compelling policy to be adhered to.

This gives rise to cynicism among the diplomats and especially among the public, urged by governments to blame “the U.N.” for its supposedly feckless behaviour (whilst they themselves are often at fault), he declared.

At a press conference last month, the president of the 193-member General Assembly, Sam Kutesa, said 70 years after the founding of the United Nations “we have a truly historic opportunity to agree on an inspiring agenda that can energize the international community, governments everywhere and the citizens of the world.”

“We must be ready to seize this challenge,” he added.

Speaking on the specifics of SDGs, Chee Yoke Ling, director of programmes at the Penang-based Third World Network, told IPS while the incorporation of the SDGs is an important part of the post-2015 development agenda, “We need to put the economic agenda as a priority for the Development Summit.”

She said financial instabilities “continue to loom before us, while increasingly anti-people and anti-development trade rules are being pushed by major developed countries in bilateral and plurilateral trade agreements such as the Trans Pacific Partnership Agreement.

“The notoriety of transnational investors suing national governments for hundreds of millions of dollars under bilateral investment agreements has triggered protests in many countries, with some developing country governments reviewing and even terminating those grossly unfair treaties. “

Paul told IPS there are various alternative policy venues, such as the World Bank, the G-8, the G-20, the IMF, and so on.

The United Nations must confront the challenge of great powers who take decisions in venues they prefer and according to their own priorities and timetables.

Washington is certainly not the only U.N. member state to act this way, but as the biggest and richest, it has the strongest inclination to act according to its own perceived interests and not in a broadly consultative process, he said.

“Finally, we should remember the difficult policy context of 2015 – the deep crisis of climate change that requires decisions that go very far and necessarily upset the comfortable assumptions of the existing global order,” Paul noted.

Reducing greenhouse gas (GHG) emissions by 85 percent is so radical a goal that no one even wants to think about it, much less create policy around it, said Paul.

And creating a fair, stable and just global economic order under the Sustainable Development Goals appears also nearly impossible in a global economy that is stumbling seriously and creating ever-greater inequality. Will the world’s oligarchs concede power and revenues? he asked.

Does all this mean that the U.N.’s aspirational summit meetings in 2015 are useless or downright negative? Not necessarily.

“To know that we cannot expect a miracle is perhaps a valuable adjustment of our unreasonable expectations and a way to think more realistically about what can and cannot be accomplished,” Paul said.

“Above all, it is a reminder that the world’s states are acting, as usual, irresponsibly. And that we need a world that functions far better if we are to survive the threats and challenges of the twenty-first century.”