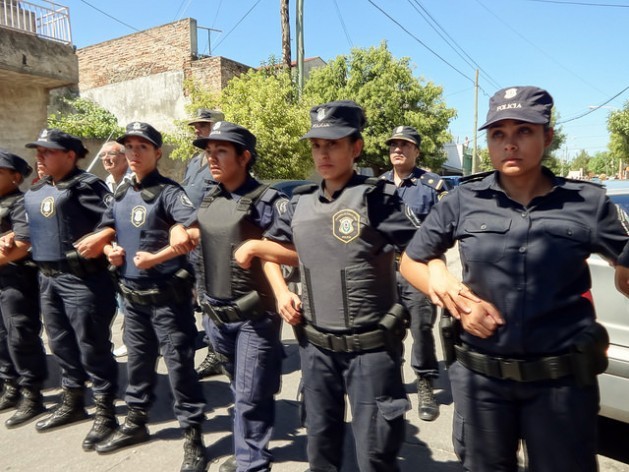 It is now common to see women police officers in Argentina, even in crowd control during protests, such as this police cordon in a neighbourhood on the outskirts of Buenos Aires. Credit: Fabiana Frayssinet/IPS

BUENOS AIRES, Mar 25 2015 (IPS) - When they joined the police, Marina Faustino and Silvia Miers were part of a small minority, and to make their way in a world of men they had to “act tough.” Now, thanks to a gender equality policy, there are more and more policewomen in Argentina, fighting sexism and prejudice as well as crime.

Faustino, who at the age of 39 is a “principal” – the post just under deputy commissioner – in the PFA, Argentina’s federal police force, first felt the calling to join the police when she was a teenager, out of admiration for her father, who at the time was an active member of the force.

“I would watch my father in the parades and I wanted to be like him,” Faustino, who was a model during her adolescence, told IPS. “But he would tell me: ‘the police isn’t a catwalk’.”

She made it into the PFA, however, against her father’s resistance. “He said it was a sexist institution, that I was going to suffer, that they didn’t respect women,” she said. And she did suffer, from the very start of her two-year training, at age 20.

“There was no alternative – if you acted even just a little bit familiar or friendly, you were seen as a woman who slept around, or as someone who got to where you were because you slept with your boss.” -- Silvia Miers

“Back then, the older policewomen kept their hair short. You had to look like a guy. But I said: ‘that’s not me, I’m feminine, they have to respect my identity, who I am’,” she added, explaining why she never cut her blond hair.

It took years for women to gain respect. “There was deep-rooted misogyny in the police,” human rights lawyer Natalia Federman told IPS.

From 2010 to December 2014 Federman was the first national director of human rights in the Security Ministry, where she developed a gender strategy.

The process began with centre-left President Cristina Fernández’s designation of the first female security minister: Nilda Garré (2010-2013), who banned restrictions or quotas for the admission of women in the four national police forces and their academies, which answer to that ministry.

In addition, the forces were ordered to accept transvestites, transsexuals and transgender recruits. Garré also issued an order to respect gender identity under all circumstances and in all police activities, as part of the fight against homophobia y transphobia.

The strategy put in place by Federman, “Building Gender Sensitive Institutions”, was considered in 2014 one of the best of its kind by the United Nations Development Programme.

It also regulated issues like maternity leave and breastfeeding breaks.

“We are trying to build a democratic institutional culture” that will promote gender equality and human rights in the area of security, Federman said. At the same time, gender violence was made “a central issue of citizen security,” she added. Airport security police inspector Silvia Miers, left, and Marina Faustino, an Argentine federal police “principal”, talked to IPS about their experiences in the security forces, before and after the implementation of a gender equality strategy. Credit: Fabiana Frayssinet/IPS

In 2011, her team carried out an internal survey to detect “symbolic or regulatory limitations” that excluded women from certain posts.

For example, the survey found that “37.7 percent of women and 55.1 percent of men believe that men are more suited to the work of prevention, containment and security during protests.”

Silvia Miers, who made a career move from the air force to the airport security police (PSA), has faced these stereotypes.

Today the PSA is the national force with the largest proportion of women, 38 percent of the total, followed by the PFA, where 23 percent of the officials or noncommissioned officers are women, the National Gendarmerie (18 percent) and the Prefecture (nine percent).

But things were very different at the start of Miers’ career, when a number of male police officers answered to her and she had to be “extremely serious, strict and tough” to gain their respect.

“Everyone remembers me as the meanest of all of the female officers,” Miers, who is now an inspector in the PSA, with 80 people under her, told IPS.

“There was no alternative – if you acted even just a little bit familiar or friendly, you were seen as a woman who slept around, or as someone who got to where you were because you slept with your boss,” added the 38-year-old deputy inspector.

Faustino also suffered when, as a young woman, some of her subordinates at a police station were men “who were old enough to be my father” or young men who would quip “here comes the blonde.”

“I had to rethink how to do things, because I couldn’t just say: ‘I’m the boss and it’s my decision.’ I had to learn from their experience, in order to not pit them against me,” she said.

The survey revealed more serious situations as well. For example, 13.8 percent of the women said they had suffered sexual harassment, often from their male superiors, and only eight percent of them had reported what happened.

Now there are police gender centres that receive internal complaints of sexual harassment or discrimination, or workplace violence, and that help reconcile family and work demands.

Miers, a mother of two who is in the middle of a divorce, had a problem reconciling her work and family life when she was promoted.

Even though “a man wouldn’t consult his wife,” she did discuss it with her husband, worried about “finding him glum when I got home from work.”

“When I worked from 8:00 to 14:00, I would help the kids with their homework, I would cook. I told him ‘our life isn’t going to be the same. From now on I’ll go to the airport in the morning but I don’t know when I’ll come back; I’m asking you to put up with it, to not get angry, to not get jealous’, because I was surrounded by men,” she said.

Faustino pointed out that while in 2010 there was just one single female police inspector, the current general commissioner of the PFA is a woman, Mabel Franco.

“Without women to push it forward, no gender perspective is possible,” the current Security Minister Cecilia Rodríguez has stated.

“There is no more glass ceiling” for promotions of women, Miers said with satisfaction. But she clarified that “you earn respect with our efforts, sometimes working twice as hard as a man. You have to study a lot, keep learning, if you really want to reach a leadership position.”

According to Federman it will take a few more promotions for women to reach the highest-level positions, before it will be possible to assess whether “real equality” has been reached.

In the meantime, it is necessary to fight stereotypes like the idea that the attributes indispensable for being a good police officer are masculine in nature: leadership, physical strength, courage, she said.

Those prejudices ignore other characteristics “that are as or more necessary to provide good police services, such as empathy, ability to dialogue and negotiate, or the potential to motivate staff, many of which are historically attributed to women.”

Values that according to Faustino helped her, for example, control in the stadiums the “barras bravas” or rowdy fans of the popular football team Boca Juniors, a task she had for 12 years.

“We can do good tactical police work, and smile, offer a glass of water, talk and they respect you,” she said.

She would address them as “gentlemen,” she learned their codes, and she managed to keep them under control.

But not without a few bad experiences. Once, she said, a fan “was rude to me and I responded with what hurt him the most: I didn’t let him into the stadium.”

“I don’t shout, and I get better results,” added Faustino, who is now studying psychology to boost her conflict resolution skills, to help work out conflicts in situations such as gender violence.

“Sometimes we women act as mediators, we avoid clashes. We listen,” Miers said.

“You can be polite but firm at the same time,” Faustino said.