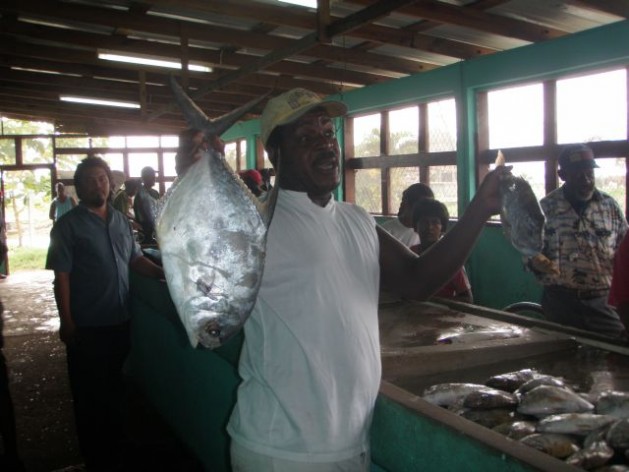 Vendors at the fish market in Belize. Courtesy of the Fisheries Department Belize City, Belize.

KINGSTON, Mar 17 2015 (IPS) - Caribbean nations have begun work on a plan to ‘climate smart’ the region’s fisheries as part of overall efforts to secure food supplies.

The concept is in keeping with plans by the Technical Centre for Agricultural and Rural Cooperation (CTA) to improve the “integration of agriculture and climate readiness” as the region prepares to deal with the impacts of climate change and the increasing demand for food.

Olu Ajayi, CTA’s senior programme coordinator, told IPS in an email that climate-smarting the region’s aquatic resources will “enable the sector to continue to contribute to sustainable development, while reducing the vulnerability associated with the negative impacts of climate change”.

“Climate-smart fisheries require improving efficiency in the use of natural resources to produce fish, maintaining the resilience of aquatic systems and the communities that rely on them,” he noted.

The fisheries sector of the Caribbean Community is an important source of livelihoods and sustenance for the estimated 182,000 people who directly depend on these resources. In recent years, fishermen across the region have reported fewer and smaller fish in their nets and scientists believe these are signs of the times, not just the result of over-exploitation and habitat degradation.

Listing some of the predicted changes, including climatic variations that promote the spread of invasive species, as well as increased salination, Murray noted that climate change is also expected to impact traditional species and contribute to coastal erosion due to more frequent and devastating hurricanes.

In fact, the secretariat’s Deputy Executive Director Susan Singh Renton told reporters at the Caribbean Week of Agriculture last November that warmer seas could also push larger species to the north, making them less available to regional fishers. CRFM is the Caricom organisation charged with the promotion of responsible use of regional fisheries.

Two weeks after launching its Climate Smart Agriculture project at the 13th celebration of Caribbean Week of Agriculture in Paramaribo, Suriname in November 2014, the CTA began development of several initiatives. The programmes, they said would help the region to “tackle the impact of agriculture on small-scale producers” – among them small-scale fishers and fish farmers – in a way that will facilitate the construction of “resilient agricultural systems”.

The project came on the heels of the announcement of a Caribbean Community Common Fisheries Policy (CCCFP) and the CRFM Climate Change Action Plan. These are two of several proposals by Community organisations to monitor and regulate capture fisheries as well as implement common goals and rules on the adaptation, management, and conservation of the resources.

Ajayi pointed out that since 2010, the CTA has been working closely with regional agencies including the Caribbean Community Climate Change Centre (5Cs) and the CRFM to implement the Regional Framework for Achieving Development Resilience to Climate Change.

Timely, since some of the species most fished and traded by the region’s fishermen are already under pressure from over-exploitation, degraded habitats and pollution. The Queen Conch, the Caribbean Spiny Lobster, the Nassau Grouper and the Parrotfish are among a growing list of species under closer scrutiny for tougher regulations on their capture and trade. Climate change is expected to make the problems worse.

“The support is aimed at developing common regional policy platforms and advocating regional policy initiatives in regional and global forums; strengthening national capacities through training and other supports and conducting comparative analyses of issues on a regional and sub-regional basis,” Ajayi said.

Scientists agree that there is need for immediate action. Technical officer in Jamaica’s Climate Change Division, Dr. Orville Grey, told reporters recently at the Jamaica Observer’s weekly exchange: “If you look at what is happening with sea surface temperatures, you’ll see that we are losing our corals through the warming of the oceans.”

Murray pointed out that because the marine resources are shared, it is important that the Caribbean Community work together to implement supporting policies and agreements.

He noted, “The region has an action plan to address climate change in fisheries, but to be fully ready it has to be taken aboard by all stakeholders.”

There are also efforts to empower fisherfolk to access and share information that will enable them to participate in policy development at the local and regional levels. But fisherfolk are still not ready.

Mitchell Lay, coordinator of the Caribbean Network of Fisherfolk Organisations (CNFO), said, however, climate smarting is on the group’s agenda for 2015

Both governments and NGOs have upped their activities to protect the resources. But while the former has been slow to act at the national and regional levels, environmentalists are upping the ante by seeking protection for several species that are seen to be in need of protection.

Two years ago, U.S.-based WildEarth Guardian petitioned to have the Queen Conch listed as threatened or endangered under U.S. law. For Caribbean nations like the Turks and Caicos Islands, the Bahamas, Jamaica and Belize that depend on economically important species like conch and lobster, the ability to trade is critical to the local economies.

On Nov. 3, 2014 the NOAA denied the petition, but many believe regional trade of these species is on borrowed time, particularly as the effects of climate change grows.

“The CRFM Action Plan seeks to work towards a regional society and economy that is resilient to a changing climate and enhanced through comprehensive disaster management and sustainable use of aquatic resources,” Murray said.

He pointed to the five objectives of the plan, which among other things include actions to mainstream climate change adaptation into the sustainable development agendas of member states, and promoting actions to reduce greenhouse gas emissions and employing renewable and clean energy sources. Historically, however, the region has been slow to enact Community policies.

Key to successful climate smarting is the participation of the fisherfolk who have been the beneficiaries of several CTA-sponsored programmes to help them access information; assist them to become more efficient; and to enable them to engage in policy development at the local and regional levels.

The next steps are dependent on the implementation of relevant and necessary policies and the strengthening the legislation. Until then, fisherfolk and supporting institutions continue to wait.