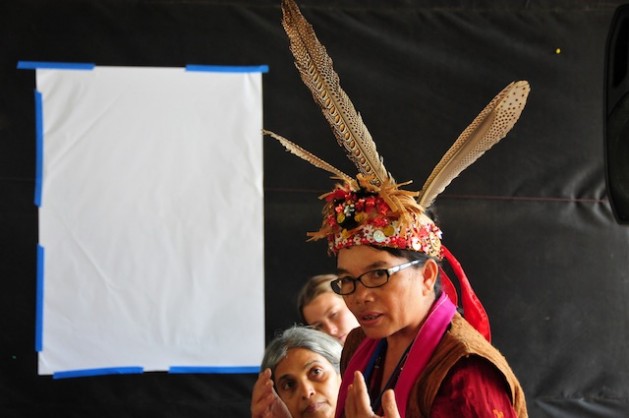 BALI, Indonesia, Mar 16 2015 (IPS) - Over the past three decades, 50 percent of the 544,150 square kilometres that comprise Kalimantan, the Indonesian portion of the island of Borneo, has been taken over by the palm oil industry.

“It will expand until it pushes us all into the ocean,” prophesies Mina Setra, deputy secretary-general of the Indigenous Peoples’ Alliance of the Archipelago (AMAN), who has fought for years to preserve an ancient way of life from being bulldozed to make way for mono-crop plantations.

“The people who have lived off the land for generations become criminals because they want to preserve their way of life." -- Mina Setra, deputy secretary-general of the Indigenous Peoples’ Alliance of the Archipelago (AMAN)
For her, the business of producing the oil, a favourite of consumers around the world, needs to fall in line with the principles of sustainability. On its current growth spurt, the industry threatens to undermine local economies, indigenous communities and Indonesia’s delicate network of biodiversity.

Consumption of palm oil has risen steadily at seven percent per annum over the last 20 years, according to new data from a report published by the Dublin-based consultancy Research and Markets.

Globally, more people consume palm oil than soybean oil, and Indonesia is the largest producer of the stuff, churning out 31 million tonnes of palm oil in 2014. Malaysia and Indonesia together account for 85 percent of palm oil produced globally each year.

While output is predicted to be lower in 2015, the industry continues to expand rapidly, swallowing up millions of hectares of forestland to make space for palm plantations.

Indonesian government officials and industrialists insist that the sector boosts employment, and benefits local communities, but people like Setra disagree, arguing instead that the highly unsustainable business model is wreaking havoc on the environment and indigenous people, who number between 50 and 70 million in a country with a population of 249 million.

Busting the myth of equality and employment

A recent study by the Washington-based Rights and Resources Initiative (RRI) found that the main benefactors of the palm oil industry are the big investors and companies that control 80 percent of the global palm oil trade.

The report found, “[The] palm oil sector has added little real value to the Indonesian economy. The average contribution of estate crops, including oil palm and rubber, to GDP [gross domestic product] was only 2.2 percent per year […].”

About half of those engaged in palm oil production are smallholders, earning higher wages than their counterparts employed by palm oil companies (about 75 dollars a month compared to 57 dollars a month). 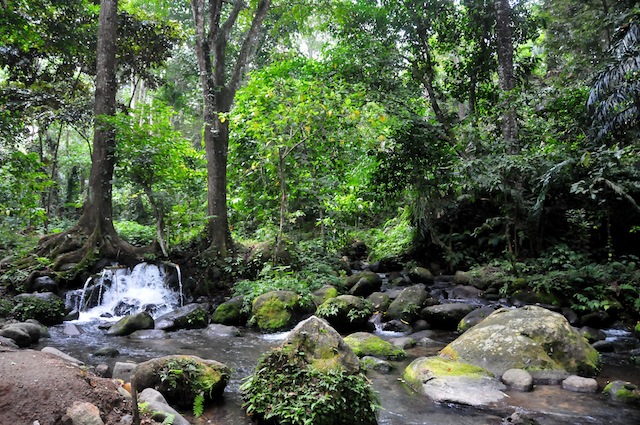 According to the World Wildlife Fund in the last three-and-a-half decades Indonesia and Malaysia lost a combination of 3.5 million hectares of forest to palm oil plantations. Credit: Amantha Perera/IPS

The industry witnessed a 15-percent drop in profits last year, but this year profits are expected to rise, with prices settling between 500 and 600 dollars per tonne. Still, many producers in Indonesia and Malaysia openly advocate lower wages to keep profit levels high.

Experts also believe the sector does a poor job of redirecting profits into the communities because of a model that relies on eating up land and falling back on a system of patronage.

“This patronage system serves as the basic structure for the production, marketing, and distribution of palm oil. It connects significant actors in order to facilitate their businesses through legitimate mechanisms such as palm oil consortia, which usually consist of local strongmen, senior bureaucrats, and influential businessmen with close links to top national leaders,” the RRI report concluded.

Grassroots activists like Setra say that industrialists are also skilled at manipulating legal loopholes to continue expanding their plantations.

For instance, the Indonesian government has imposed a moratorium on land clearing for new plantations, a bid to appease scientists, Western nations and citizens concerned about the gobbling up of rainforests for monocultures.

However, the ban only applies to new licenses, not existing ones, allowing companies with longstanding licenses to violate the law without question.

Even when the central government cracks down, activists say, companies use local connections with powerful politicians to undercut regulations.

“It is a vicious system that feeds on itself,” the indigenous activist tells IPS.

According to Bryson Ogden, RRI’s private sector analyst, “The structure of the industry is such that it leaves out local communities.”

“The biggest losers in this process were locals who lost their lands and livelihoods but have not been incorporated in the new economy on advantageous terms,” the RRI report said. “Indigenous peoples, subsistence farmers, and women were the most vulnerable groups, as well as smallholders owning and managing their own oil palm plots.”

But when locals try to take a stand for their rights, such campaigns result in the alienation of whole communities or, worse, the criminalisation of their activities.

In July 2014, a protestor was shot dead by police in south Kalimantan while taking part in a protest against palm oil expansion. Another such killing was reported on Feb. 28 in Jambi, located on the east coast of the island of Sumatra.

“The people who have lived off the land for generations become criminals because they want to preserve their way of life,” Setra laments.

She believes that as long as there is global demand for the oil without an accompanying international campaign to highlight the product’s impact on local people, companies are unlikely to change their mode of operation.

Others say the problem is a lack of data. Scott Poynton, founder of The Forest Trust (TFT), an international environmental NGO, tells IPS that there is inadequate information on the socio-economic impacts of oil operations.

He says the focus on deforestation – in Indonesia and elsewhere – is a result of the tireless work of NGOs dedicated to the issue, combined with “easy-to-use tools like the World Resource Institute’s Global Forest Watch”, a mapping system that allow people to quickly and cheaply identify deforestation.

He says similar resources must be made available to those like Setra – grassroots leaders on the ground, who are able to monitor and report on social degradation caused by the palm oil sector.

As the United Nations and its member states move closer to finalising the Sustainable Development Goals (SDGs) – the international community’s blueprint for development and poverty-reduction in the coming decades – Indonesia and the palm oil sector will be forced to reckon with the unsustainable nature of the mono-crop corporate model, and move towards a practice of inclusivity.

One of the primary topics informing the knowledge platform on the SDGs is the promise of Sustainable Consumption and Production (SCP), defined as “the use of services and related products, which respond to basic needs and bring a better quality of life while minimizing the use of natural resources […] so as not to jeopardize the needs of further generations.”

According to the World Wildlife Fund in the last three-and-a-half decades Indonesia and Malaysia lost a combination of 3.5 million hectares of forest to palm oil plantations.

Statistics like these suggest that nothing short of sweeping changes will be required to put indigenous people like Setra at the centre of the debate, and build a sustainable future for palm oil production.