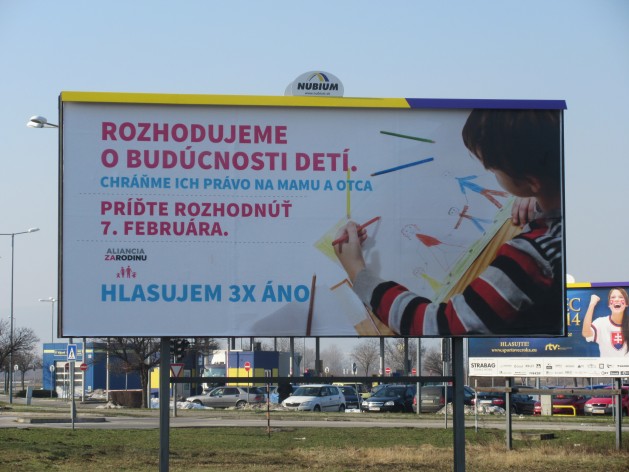 Billboard for the referendum called to strengthen a constitutional ban on same-sex marriage and same-sex adoption in Slovakia in February. It says: WE ARE DECIDING ABOUT CHILDREN'S FUTURES. LET'S PROTECT THEIR RIGHT TO A MOTHER AND FATHER. Credit: Pavol Stracansky/IPS

BRATISLAVA, Mar 15 2015 (IPS) - Lesbian, gay, bisexual and transgender (LGBT) groups in Central and Eastern Europe, which still faced mixed prospects as they fight for rights and acceptance, are now taking some heart from the “failure” of a referendum in Slovakia, a member of the European Union.

Last month, a referendum called to strengthen a constitutional ban on same-sex marriage and same-sex adoption in Slovakia was declared invalid after only just over 20 percent of voters turned out.

The controversial plebiscite was heavily criticised by international rights groups, which said it pandered to homophobic discrimination and was allowing human rights issues affecting a minority group to be decided by a popular majority vote.

The campaigning ahead of the vote had often been bitter and vitriolic, including public homophobic statements by clergy, and a controversial negative commercial about gay adoption, which Slovak TV stations refused to broadcast and eventually only appeared on internet.

The commercial showed a child in an orphanage being told that his new parents were coming to collect him and, after two men appear at the door, asking: “Where’s Mum?”

Activists here say that the referendum’s outcome was a sign that, despite this campaigning, Slovaks know that LGBT people pose “no threat” to society and has positively furthered discussion about allowing registered partnerships in the country.

Martin Macko, head of the Bratislava-based LGBT rights group Inakost, told IPS: “The referendum showed that people consider the family important, but that they do not see same-sex families as a threat to traditional families. The long-term perspective regarding discussions on registered partnerships in Slovakia is positive.”

Importantly, the result has also been welcomed in other parts of Central and Eastern Europe where many LGBT groups still face intolerance and discrimination.

Evelyne Paradis, Executive Director of international LGBT rights group ILGA-Europe told IPS: “LGBT activists across Europe have welcomed the outcome of the Slovak vote … hopefully the referendum will lead to a constructive discussion about equality in Slovakia. At the same time, we know that there is a broad diversity of views in the region which means that much work remains to be done before full equality is realised.”

Compared with Western Europe, attitudes in many countries in Central and Eastern Europe to LGBT people and issues are often much more conservative and in some states actively hostile.

The Czech Republic, whose larger cities have relatively open and vibrant gay communities, is the only country in the region which allows for registered partnerships of same-sex couples.

In other countries, such as Slovakia, Hungary, Croatia and Poland, marriage is defined constitutionally as only between a man and a woman. In January this year, Macedonia’s parliament voted to adopt a similar clause in its constitution.

Adoption by same sex couples is banned in all states in the region while other important legislation relating to LGBT issues is also absent. In Bulgaria, for instance, inadequate legislation means that homophobic crimes are investigated and prosecuted as ‘hooliganism’. This, activists claim, creates a climate of fear for LGBT people.

Poor records on minority rights in general in places like, for instance, Ukraine, mean that while the state may ostensibly be committed to LGBT rights, such communities are in reality extremely vulnerable.

In Russia, legislation actively represses same-sex relationships, with federal laws criminalising promotion of any non-heterosexual lifestyle, while Lithuania has legal provisions banning the promotion of homosexuality.

Deeply negative attitudes towards homosexuals are widespread in some societies. A 2013 survey in Ukraine showed that two-thirds of people thought homosexuality was a perversion, while a study in the same year in Lithuania showed that 61 percent of LGBT people said they had suffered discrimination based on sexual orientation or gender identity.

Isolated verbal and physical attacks and passive intolerance among more conservative groups are common across the region. But in some countries, specifically Russia, anyone even suspected of being non-heterosexual faces open, organised and sometimes lethally violent persecution.

Natalia Tsymbalova, an LGBT rights activist from St Petersburg, was forced to flee Russia in September last year after receiving death threats. Now claiming asylum in Spain, she was one of at least 12 LGBT activists who left Russia last year.

Speaking from Madrid, she told IPS about the continuing repression of LGBT people in her home country.

She said that although state propaganda campaigns had “switched to ‘Ukrainian fascists’ and the West” being portrayed as the public’s greatest enemy instead of LGBT people since the annexation of Crimea and the start of the Ukraine conflict, “state homophobia has not disappeared”.

“It has just faded into the background,” she added, “no longer making top headlines in the news, but it is still there and it has never left. The number of hate crimes is not falling, and they are being investigated as badly as before.”

In Slovakia, a strongly Catholic country where the Church’s influence can be extremely strong in many communities, supporters of the referendum welcomed Pope Francis’ personal endorsement of their cause.

It has been speculated that the conservative Alliance for Family movement, which initiated the referendum, is funded by Slovakia’s Catholic Church and that the Church was the driving force behind moves to bring about the vote.

However, some rights activists also say that politicians in countries struggling economically or looking to entrench their own power can often use minorities, including LGBT people, as easy political targets to gain voter support.

ILGA’s Paradis told IPS: “Unfortunately many political leaders use the LGBT community as scapegoats … from activists we often hear that they do this to hide ‘real problems’ in countries, such as youth unemployment, access to education and healthcare. They promote ‘traditional family values’ as the way to rescue society. Sadly, in doing this, political leaders build a climate of intolerance and hatred.”

Saying that Russian politicians are now using homophobia to push wider agendas, Tsymbalova told IPS: “Homophobia plays an important role in the anti-Western rhetoric of President [Vladimir] Putin and his fellows. It is one of the main points of the conservative values that they try to promote and the public still has negative attitudes toward LGBT communities.”

The outcome of the Slovak referendum has left activists there more optimistic about the future for LGBT people in their country.

They are now pushing for discussions with the government about introducing registered partnerships and they hope that LGBT communities in other countries in the region will be heartened by the result or that, at least, people hoping to organise similar referendums will reconsider what they are doing.

Macko of Inakost told IPS: “Religious groups in some Balkan and Baltic countries are considering organising similar referendums and we really hope this will discourage them.”

Paradis told IPS that while the Slovak referendum had already been welcomed by many of its member groups in Central and Eastern Europe, progress on LGBT issues in many countries, including registered partnerships, was unlikely to be swift. “There indeed is more discussion in the region on granting rights to same sex partnerships, but what we see is a very mixed picture.”

However, the outlook for LGBT people in some places remains grim. Tsymbalova told IPS that many LGBT people in her home country have given up hope of any positive changes in the foreseeable future.

“In our community, there is almost no one who believes that the situation for LGBT people in Russia will seriously change for the better any time soon. Under the existing regime, which promotes and exploits homophobia, these changes will not happen and there is almost no hope of a regime change, so expectations are gloomy.”

She added: “Many LGBT activists have either left Russia, like me, or are going to. [As] for same-sex registered partnerships, it would take several decades to be accepted in Russia and I don’t believe I will see this in my lifetime. It is completely out of the question for the next 20 or 30 years.”