Joni Seager is a Professor at Bentley University, Deepa Joshi is an Assistant Professor at Wageningen University and Rebecca Pearl-Martinez is a Research Fellow at The Fletcher School, Tufts University. 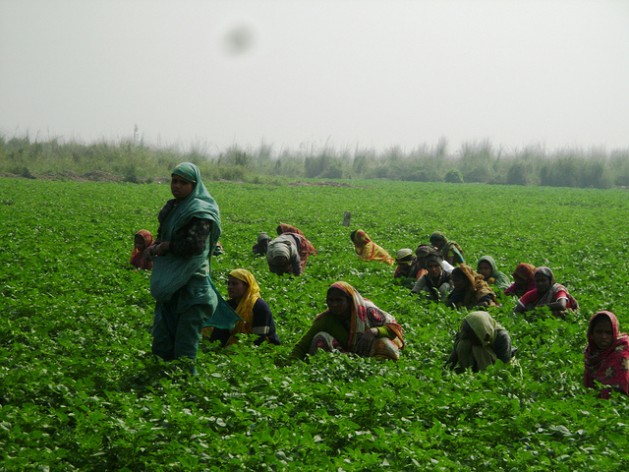 NEW YORK/NAIROBI, Mar 30 2015 (IPS) - Experts from around the world gathered in New York recently to launch work on the Global Gender Environment Outlook (GGEO), the first comprehensive, integrated and global assessment of gender issues in relation to the environment and sustainability.

Never before has there been an analysis at the scale of the GGEO or with the global visibility and audience. It will provide governments and other stakeholders with the evidence-based global and regional information, data, and tools they need for transformational, gender-responsive environmental policy-making – if they’re willing to do so.

The writing workshop happened in the context of the recent 59th session of the U.N. Commission on the Status of Women (CSW) 20 years after 189 countries met in Beijing to adopt a global platform of action for gender equality and women’s empowerment.

Beijing+20 offers a critical moment to assess how far we’ve come and put gender at the centre of global sustainability, environment and development agendas. Twenty years later, what have we accomplished?

In 2015, governments will be setting the development agenda for the next 15 years through the Sustainable Development Goals, as well as negotiating a new global climate agreement.

A recent flagship publication by UN Women, The World Survey on the Role of Women in Development: Gender Equality and Sustainable Development (2014), reveals that 748 million people globally (10 per cent of the world’s population) are without access to improved water sources.

Women and girls are the primary water carriers for these families, fetching water for over 70 per cent of these households. In many rural areas, they may walk up to two hours; in urban areas, it is common to have to wait for over an hour at a shared standpipe.

This unpaid “women’s work” significantly limits their potential to generate income and their opportunities to attend school. Women and girls suffer high levels of mental stress where water rights are insecure and, physically, the years of carrying water from an early stage takes its toll, resulting in cumulative wear and tear to the neck, spine, back and knees.

The bodies of women, the Survey concludes, in effect become part of the water-delivery infrastructure, doing the work of the pipes. Not only in water, but also in all environmental sectors – land, energy, natural resources – women are burdened by time poverty and lack of access to natural and productive assets.

Their work and capabilities systematically unrecognised and undervalued. This is a long call away from the Beijing commitment to “the full implementation of the human rights of women and the girl child as an inalienable, integral and indivisible part of all human rights and fundamental freedoms.”

On the one hand, our thinking about the inter-linkages between gender, sustainability, and development has progressed significantly since 1995. Innovative research and analysis have transformed our understanding so that gender is now seen as a major driver – and pre-requisite – for sustainability.

Gender approaches in U.N. climate negotiations are a good case in point. Thanks to persistent efforts on advocacy, activism, research, and strategic capacity building by many, it is more widely accepted that gender roles and norms influence climate change drivers such as energy use and consumption patterns, as well as policy positions and public perceptions of the problem.

These were acknowledged – albeit late – in negotiations, policies and strategies on the topic. One small indication is that references to “gender” in the draft climate change negotiating texts increased dramatically from zero in 2007 to more than 60 by 2010.

According to data by the Women’s Environment and Development Organization (WEDO) as of November 2014, 32 decisions under the climate change convention now include gender.

On the other hand, not much seems to have changed. In 1995, inequalities, foremost gender inequality, undermined economic prosperity and sustainable development. This is even more the case today.

Perpetuating gender inequality and disregarding the potential contribution of both men and women is short-sighted, has high opportunity cost and impacts negatively on all three the pillars of sustainable development – environmental, social and economic.

The course to achieving gender equality also remains plagued by a simplistic translation of gender as women and empowerment as ‘gender mainstreaming’ in projects and interventions that are not necessarily planned with an objective of longer-term, transformational equality.

Numerous studies point out the obvious links between social and political dimensions of gender inequality and the economic trade-offs, and that narrowing the gender gap benefits us all and on many fronts.

The World Bank, World Economic Forum and the OECD, for example, have all concluded that women who have access to education also have access to opportunities for decent employment and sustainable entrepreneurship – key components of an inclusive green economy. The education of girls is linked to its direct and noticeable positive impact on sustainability.

And most global policies on environment and development remain dangerously uninformed by gendered analysis.