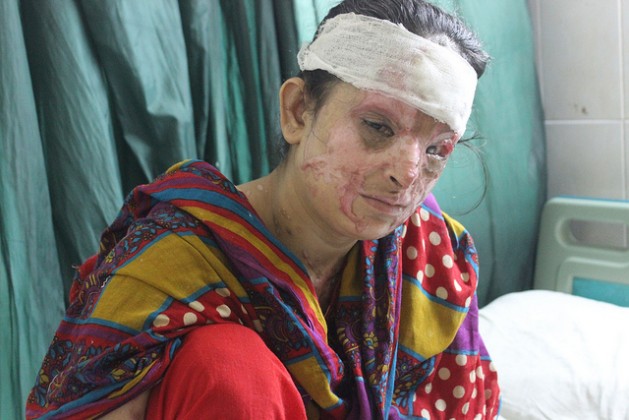 Thousands of young women around the world who have survived acid attacks are forced to live with physical, psychological and social scars. Credit: Zofeen Ebrahim/IPS

Three years ago, a jealous husband, who suspected her of having an affair with her boss at a software company, poured a whole bottle of hydrochloric acid on her face while she was asleep. The fiery liquid seared her flesh, blighting her face almost entirely while blinding her in one eye.

"It is far less tangible but the discrimination – from friends, relatives and neighbours – hurts the most." -- Shirin Juwaley, an acid attack survivor and founder of the Palash Foundation
What remains today of a once pretty visage is a disfigured and taut stretch of burnt skin with nose, lips, and eyelids flattened out almost completely. Despite spending 10,000 dollars on 12 reconstructive surgeries and two eye operations, the acid attack survivor is still partially blind.

From earning a five-figure salary as a software professional, Panikker today ekes out a living as a cook at a local non-profit. “My life has taken a 180-degree turn,” she tells IPS. “From a successful career woman, I’m now a social reject with neither resources nor family to call my own.”

Acid attacks in India have ravaged the lives of thousands of young women whose only fault was that they repudiated marriage proposals, rejected sexual advances from men they didn’t fancy, or were caught in the crossfire of domestic disputes.

In India’s patriarchal society, men who take umbrage at being spurned turn to acid as a retributive weapon.

“Acid attacks severely damage and burn skin tissue, often exposing and even dissolving the bones,” explains Rohit Bhargava, senior consultant dermatologist with Max Hospital in Noida, a suburban district in the northern Indian state of Uttar Pradesh, where 185 out of 309 acid attacks reported in 2014 took place.

“Long-term consequences include blindness, permanent scarring of the face and body, disability and lifelong physical disfigurement,” the doctor tells IPS.

But some survivors, whose appearance changes overnight, say the psychological scars are the ones that take longest to heal. There are social ramifications too, as the attacks usually leave victims disabled in some way, thereby increasing their dependence on family members for even the most basic daily activities.

Shirin Juwaley, an acid attack survivor who launched the Palash Foundation to address social reintegration and livelihood alternatives for people with disfigurement, says social exclusion is far more painful than any physical injury inflicted on an acid attack victim. “It is far less tangible but the discrimination – from friends, relatives and neighbours – hurts the most,” she tells IPS.

In 1998, Juwaley’s husband doused her with acid after she sought a divorce. Despite several police complaints, he still roams free, while Juwaley has had to painfully piece her life back together again.

Today she has a busy schedule, and travels the world addressing conferences and symposia on the social, financial and psychological impact of acid burns. Her organisation also studies the social exclusion of people who live with altered bodies.

The Acid Survivors Trust International (ASTI), a London-based charity, tentatively estimates that some 1,000 acid attacks occur every year in India. However, in the absence of official statistics, campaigners put the true figure even higher: at roughly 400 every month.

“The fear of reprisals inhibits many women from coming forward to report their ordeal,” explains Ashish Shukla, a coordinator at Stop Acid Attacks, a Delhi-based non-profit that has rehabilitated and empowered over 100 acid attack victims since its inception in 2013.

“In India, acid attacks are even worse than rape as the victims, who are usually female, are subjected to humiliation on a daily basis. Most of the women are shunned and ostracised […],” explains Shukla.

The activist adds that public and government apathy results in a double victimisation of the survivors. “They are forced to repeatedly appear in court, recount their trauma, and [visit] doctors even as they grapple with their personal tragedy of physical disfigurement, loss of employment and social discrimination,” elaborates the activist.

As per the Criminal Law (Amendment) Act 2013, a person convicted of carrying out an acid attack in India can be sentenced to anything from 10 years to life imprisonment.

The Supreme Court ruled on Jul. 16, 2013, that all states regulate the sale of easily available substances like hydrochloric, sulfuric, or nitric acids – common choices among perpetrators – adding that buyers must provide a photo identity card to any retailer, who in turn should record each customer’s name and address.

However, most retailers IPS spoke to demonstrated complete ignorance of the law. “This is the first time I’m hearing about this ruling,” Suresh Gupta, owner of Gupta Stores, a small, family-owned outfit in Noida, tells IPS.

Campaigners say that this horrific form of gender-based violence will not end until the government makes it much harder for offenders to procure their weapon of choice; currently, one-litre bottles of acid can be purchased over the counter without a prescription for as little as 33 cents.

The Supreme Court has condemned the Centre for failing to formulate a strong enough policy to curb acid sales. In early April, the Court directed private hospitals to treat acid attack survivors free of cost, and additionally ruled that states must take action against medical facilities that fail to comply with this directive.

Experts say India should take a leaf out of the books of neighbouring Pakistan and Bangladesh by firming up implementation of existing laws. In Bangladesh, acid assaults have plummeted from 492 cases in 2002 to 75 last year, according to ASTI, since the government introduced the death penalty for acid attacks.

Stiffer legislation in Pakistan has resulted in a 300-percent rise in the number of women coming forward to report the crime.

Progress in India has been slower, although the state governments of Haryana and Uttar Pradesh have set a good precedent by funding the entire cost of medical treatment for some acid attack survivors.

Ritu Saa is one such example. The 20-year-old who had to give up her studies following an acid attack in 2012 by her cousin is today a financially independent woman. She works at the Cafe Sheroes’ Hangout, an initiative launched by the Stop Acid Attacks campaign in the city of Agra in Uttar Pradesh, which employs several survivors.

“The campaign and the government have really helped me a lot,” Saa tells IPS. “Today, I have a job, a decent salary, good food, accommodation and am standing on my own feet.”

While acid attacks have traditionally been perceived as a problem involving male perpetrators and female victims, advocates say that attacks on men are also surging, with a third of all cases reported each year involving males embroiled in property or financial disputes.

Rights activists and campaigners contend that until the government formulates and enforces a multi-pronged approach to ending this grisly practice, scores of people in this country of 1.2 billion remain at risk of suffering a fate that some say is worse than death.