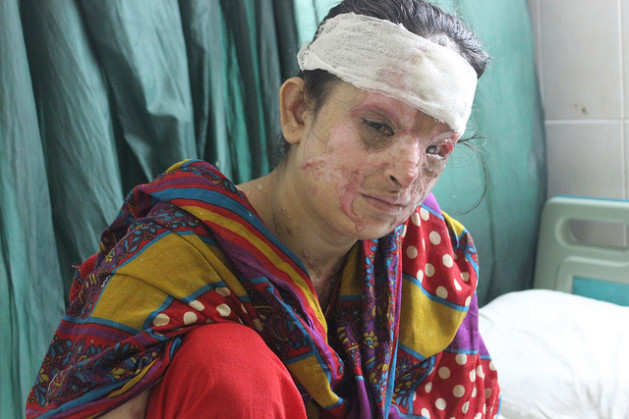 Ruqqaiya Perween at the Burns Centre in Karachi, after an acid attack that left scars on 22 percent of her face and upper body. Credit: Zofeen Ebrahim/IPS

Scarred for life with burns on 22 percent of her face and upper body, the mother of four said her husband, Asghar Maulvi Bukhsh, flung acid on her while she was asleep with her children – and some even fell on them.

“This is what I looked like,” she said, pointing to a photo showing a smiling and healthy young woman. “I don’t think I will ever be the same. I pray to God to make me well enough to be able to take care of my children, otherwise I have no desire to live.”

“Since my marriage 12 years ago, I’ve never had a day’s peace,” she said, her voice thick with emotion, while a tear fell from her left eye, which is now blind. “Beating me up was a regular pastime of his,” she said. It was always because he needed the money she earned as domestic help, she added.

She said her husband had never worked since they got married. “He suspected I gave some of the money to my divorced mother, although what I earned was so meagre, I’d hardly be able to feed the children three square meals,” she said.

Despite stiffer sentences for offenders, ranging from 14 years to life imprisonment and a fine of one million rupees (10,000 dollars), since the Acid Crime Prevention Act was modified in 2011, campaigners say the number of women doused in acid has increased.

According to a report by the Aurat Foundation (AF), which works for the rights of women, the reported cases of violence against women went down overall by 12 percent in 2012. However, some forms of violence showed an increase. In particular, the staggering 89 percent rise in reported acid attacks, followed by domestic violence, which rose 62 percent, burning (33 percent) and murder (11 percent).

“It’s the easiest form of violence… you can get acid over the counter and there is a complete lack of fear of retribution,” Maliha Zia, manager of law and gender at AF, told IPS.

In the last couple of years, especially after a Pakistani film Saving Face won an Oscar in 2012, there has been increased conversation around this form of violence – which may actually have given some men the idea, Zia said.

While statistics are patchy as not all cases are reported and not all women make it to the hospital, the Islamabad-based Acid Survivors Foundation said that in the last seven months, over 65 cases had been reported from across Pakistan.

In 2012, the foundation, which provides legal and medical help, said it was able to collate reports of 111 acid attack cases. These are collected from the field, various NGOs, survivors and families, the police and government hospitals from around the country.

In addition, 70 percent of acid crime victims are women, and in 60 percent of cases the attacks occur during domestic disputes.

“Laws are there in Pakistan and they are very good,” Dabir-ur-Rehman, heading the Friends of Burns Centre, a patients’ welfare branch of the Burns Centre, told IPS. But he said that in the last 12 years, since the philanthropic venture began, he had “not seen a single person convicted or any [woman] getting justice.”

Valerie Khan of ASF, however, has seen the conviction rate tripling since 2012 after the amendments in the law. “But let’s face it,” she added. “From a six percent conviction rate for acid attacks we have reached 18 percent, which is an improvement. But it still means that more than 80 percent of the culprits are still escaping justice.”

What needs to be done, said Khan, is strengthening the law enforcement mechanism. The ASF believes that while the amendment in the law was a good first step, it was not enough. So the foundation is still campaigning for a more comprehensive acid and burn crime bill, which is yet to be passed.

“It includes, among other components, a monitoring mechanism to overview the enforcement of the laws related to acid and burn violence,” she said.

In addition, Zia said: “It is equally important for the media to not just report on the crime, but to follow it through and report on the convictions so that it can act as a deterrent for future criminal attempts.”

One reason for the low conviction rate, said Zohra Yusuf, chair of the independent Human Rights Commission of Pakistan, is that “investigation in most criminal cases, also in the cases of acid attacks, is extremely poor, so offenders are often acquitted.”

And victims are frequently silenced, she said.

Fakhra Younus, a survivor who made international news 13 years ago, never got justice, because her perpetrator, Bilal Khar, belonged to a powerful political family. Younus underwent more than three dozen surgeries before killing herself last year; Khar continues to enjoy virtual impunity.

“A lot of pressure is brought upon families to retract their complaints,” said Yusuf, adding that “In the case of Fakhra, the entire family backtracked and said they could not identify him in court.”

But until a stricter law is put in place, Dr Shahid Hussain at Karachi’s Burns Centre offers a solution. “If the government would put a check on the sale of concentrated acid, it can go a long way in controlling these crimes,” he told IPS.

Every month, he said, he sees two to four women coming to the ward after they have been doused in acid.

Zia said, “There was a section in the amended bill which put a check on the buying and selling of acid, but it was scratched off, before its passage.”

Meanwhile, Perween’s husband, who is still at large, calls her up daily threatening to scorch her younger sister the same way, if she does not drop the charges against him.

“Come what may, I will not change what I said!” said a resolute Perween, refusing to back down.