Dr. Fatoumata Nafo-Traoré is Executive Director of the Roll Back Malaria (RBM) Partnership. 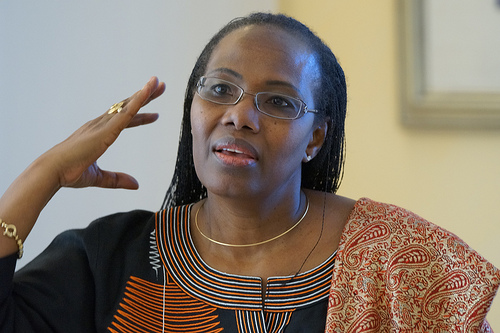 UNITED NATIONS, Apr 20 2015 (IPS) - Later this week, communities around the world will commemorate World Malaria Day for the last time in the context of the global development priorities set in 2000.

Aspiring for a world free from hunger, poverty and disease, the eight Millennium Development Goals (MDGs) were endorsed by the largest gathering of world leaders in history.

Most of those world leaders have since moved on, but the goals they determined galvanised the planet to work together toward a better future for humanity and spawned health and development partnerships which continue to this day.

These unique alliances have evolved over time to meet the changing environment, and, in the case of malaria control and elimination, succeeded exponentially where other development efforts have stalled.

Since 2000 and the dawn of the new millennium, over four million lives have been saved by mass distribution of insecticide treated nets, insecticide spraying of interiors, improved malaria treatments and rapid, on the spot, diagnosis of malaria. Over the past 15 years, malaria mortality has decreased by 47 percent worldwide and by 55 percent in Africa alone.

In fact, 64 countries have achieved the malaria-specific Millennium Development Goal – to have halted and begun to reverse the incidence of malaria by 2015. This means less newborn, infant and maternal deaths, fewer days missed at school and work, more productive communities, stronger health systems and more vibrant economies.

But these gains are fragile and their impact unevenly distributed. As we shift gears – from the Millennium Development Goals to the broader Sustainable Development Goals – we must not forget the unfinished business of the MDGs, the unmet targets – the populations still at risk and the continuing unnecessary deaths, suffering and loss of livelihood caused by malaria.

The Roll Back Malaria Partnership (RBM) has come a long way in the last 15 years – but we still have some distance to go.

Universal coverage with insecticide treated nets, effective treatments, rapid diagnostics and indoor spraying has not yet been achieved. Too often, migrant workers, mobile communities and other remote populations do not yet receive adequate malaria services.

In Africa today, 10,000 women and between 75,000 and 200,000 infants are estimated to die annually, with many millions suffering worldwide, as a result of malaria infection during pregnancy. It is unacceptable that the most vulnerable in our society remain the least protected.

Greater investment in future generations, in the protection of mothers and their unborn babies from malaria, is a moral imperative. We can and must do better.

In this critical transition year, the RBM Partnership will launch its second generation global malaria action plan called “Action and Investment to defeat Malaria (AIM) 2016-2030: for a Malaria-Free World.”

It makes the global case for eliminating the scourge of malaria over the next 15 years and avoiding the resurgence of the disease, with its associated crippling economic cost and devastating suffering and death.

The AIM calls for heightened investment within the new Sustainable Development framework and emphasises a people-centred approach, which leaves no one behind. It also shows clearly how engaging all sectors of society will boost global efforts and generate the much needed human and financial resources to win the race against malaria.

With the drug and insecticide resistance eroding effective tools, malaria control and elimination efforts will need smart investments and increased international and domestic spending as endemic countries move from low to middle income status and shift their sights to ambitious elimination targets.

An investment in malaria control and elimination is an investment in the future, and it’s undoubtedly one of the best buys in global health. The tools are cost-effective and the return on investment high. If we can eliminate the disease in sub-Saharan Africa alone by 2030, the world stands to gain an estimated 270 billion dollars.

If we are to make malaria history we will need new tools – innovations that will help us realise our ambition towards a malaria-free world, particularly those that can accelerate elimination in the near future and tackle the challenges we face today, like drug and insecticide resistance.

We will also need transformative technologies – effective vaccines and rapid malaria tests that can be used in remote areas and can detect cases that have no visible symptoms.

The Roll Back Malaria Partnership will be ready to adapt strategies and approaches, amplify political will and country readiness, so that together we can win the race against malaria.

Winning the fight against malaria means that families, communities, and countries will thrive as never before.

By working together we can put an end to this needless suffering and strengthen the potential of individuals, communities and countries to achieve our ultimate goal – a world free from malaria.

Note: World Malaria Day was instituted by WHO Member States during the 2007 World Health Assembly and is celebrated on 25 April each year to highlight the need for continued investment and sustained political commitment for malaria control and elimination. The theme for the 2013-2015 campaign is “Invest in the Future. Defeat malaria”.