Victoria Tauli-Corpuz is U.N. Special Rapporteur on the Rights of Indigenous Peoples.

UNITED NATIONS, May 11 2015 (IPS) - U.N. member states are meeting throughout the year to finalize the Sustainable Development Goals (SDGs), which will set the global development agenda for the next 15 years. The goals are supposed to be universal and aspire to “leave no one behind.” 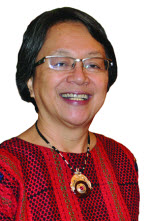 But Indigenous Peoples, who are among the poorest and most marginalised people on earth, are all but invisible in the latest draft of the SDGs. As an indigenous woman and the U.N. Special Rapporteur on the Rights of Indigenous Peoples, I am deeply concerned that almost all references to Indigenous Peoples have been deleted, as we have learned from experience that unless we are explicitly included, we are likely to be excluded.

Indigenous Peoples face systemic discrimination and exclusion in almost every country they live in. Without specific targets and indicators to measure and report on the realisation of their rights, this inequality is likely to continue in the 15-year implementation of the SDGs.

Indigenous Peoples have been all but erased from the development agenda. Include us, so that we can protect our traditions and territories for our children and protect the planet’s biodiversity for all the world’s children.

Chief among these is that many Indigenous Peoples do not have legal title to the lands they have lived on for generations. This insecurity has resulted in encroachment by governments and corporations as well as forced evictions of countless communities from their ancestral lands.

Because Indigenous Peoples’ lives, livelihoods, cultures, and identities are intrinsically tied to their territory, this loss often deprives them of their income and self-sufficiency, and threatens their very identity and survival.

Securing legal recognition of Indigenous Peoples’ land rights has other benefits too: it decreases poverty, supports food security, and encourages long-term economic and environmental benefits.  But despite progress in some regions, there has been a sharp slowdown in the overall global recognition of Indigenous Peoples’ and communities’ land rights since 2008.

The current SDG draft recognises the land rights of individuals (men and women) but does not take into account the estimated 1.5 billion Indigenous Peoples and forest-dwelling and forest-dependent local people who govern 6.8 billion hectares of land through community tenure arrangements.

Currently governments only recognise about 513 million hectares of these lands. The SDGs should therefore include an indicator to measure recognition of collective land rights, and reinstate a deleted provision requiring that governments obtain the free, prior, and informed consent (FPIC) of Indigenous Peoples before handing over their lands.

This is particularly critical given that “development” for many Indigenous Peoples has been more of a threat than a promise. An analysis of around 73,000 mining, agricultural, and lodging concessions in eight countries revealed that more than 93 percent of these developments involved lands inhabited by Indigenous Peoples and local communities.

Development projects in countries that lack strong safeguards often rob them of their lands and livelihoods—but rarely do they deliver on the promise of shared economic development.

In Indonesia, for example, palm oil corporations have engulfed over 59 percent of community forests in West Kalimantan, yet the industry contributes less than two percent to Indonesia’s GDP and has not increased rural employment. Inequality has risen, and Indigenous Peoples’ land rights have been transferred to corporations on a large scale.

The consequences of insecure land tenure extend beyond indigenous communities: Indonesia is now the world’s fourth largest emitter of greenhouse gases, with almost 80 percent of emissions stemming from deforestation, land use change, and the draining and burning of peatland.

On the other hand, deforestation rates are dramatically lower in areas where Indigenous Peoples have legal recognition of their land rights. Despite suffering some of its worst impacts, Indigenous Peoples can actually offer some of the most promising solutions to climate change.

Community forest rights in Nepal, for example, improved the health of the forest to the point where it absorbed 180 million tons of carbon. It is no coincidence that traditional indigenous territories overlap to a large degree with biodiversity hotspots.

Indigenous Peoples’ natural resource management has sustained some of the world’s most intact ecosystems and holds important lessons for a planet that must change if it is to endure. They bring alternative thinking and perspectives to a development paradigm that has repeatedly put sustainability and human rights on the back burner and favored short-term profits.

Because many Indigenous Peoples live in rural areas and are politically and physically distant from the centers of power, it is all too easy for us to become invisible.

We fought for the global recognition of our rights in the UN Declaration on the Rights of Indigenous Peoples. We had to fight to be called “Indigenous Peoples,” a term that recognises us as peoples with distinct identities and cultures who have the right to self-determination.

As they stand now, the SDGs are a step backwards from these achievements. Indigenous Peoples have been all but erased from the development agenda. Include us, so that we can protect our traditions and territories for our children and protect the planet’s biodiversity for all the world’s children. Don’t leave us behind.