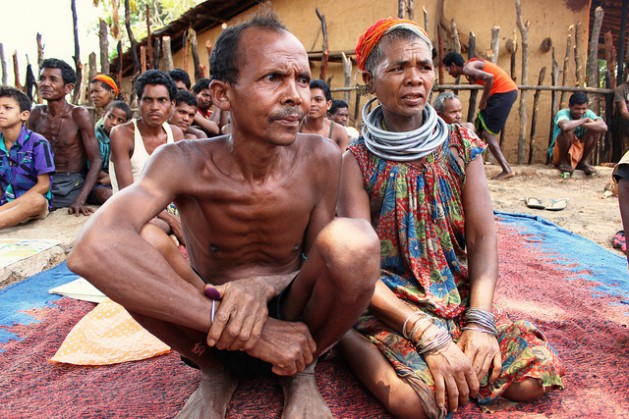 The Bonda tribe is one of the most ancient indigenous groups in India. Credit: Manipadma Jena/IPS

UNITED NATIONS, Sep 4 2014 (IPS) - The world’s 370 million indigenous people, who say they were marginalised in the Millennium Development Goals (MDGs), want to play a key role in the U.N.’s post-2015 development agenda, which will be finalised next year.

“The world can still benefit from [our] knowledge by including us in the journey for the next 15 years. And we want this to be an equal partnership, we do not want to be beneficiaries,” stated Galina Angarova, the New York representative of Tebtebba Foundation (the Indigenous Peoples’ International Center for Policy Research and Education).

In her speech at the closing session of the three-day conference of NGOs sponsored by the U.N. Department of Public Information (DPI) last week, she highlighted the need to include marginalised groups in development targets as well as in the on-going negotiations for the Sustainable Development Goals (SDGs), which will replace the MDGs in 2015.

"A lot of the corporations are eyeing [indigenous peoples'] territories for future profit. This is why free prior and informed consent is key. Because without it, they are just free to go and grab, and develop on those territories." -- Galina Angarova, the New York representative of Tebtebba Foundation (Indigenous Peoples' International Center for Policy Research and Education)
Indigenous peoples continue to fight for their right to self-determination, which is not a reality yet, despite being granted by the 2007 U.N. Declaration on the Rights of Indigenous Peoples.

The outcome document of the DPI/NGO conference, drafted and amended through a participative process over the past months, will feed into the discussion about the post-2015 agenda and the SDGs in the General Assembly, the first World Conference on Indigenous People that will be held on Sep. 22-23, and into the Secretary General’s synthesis report to be issued later this autumn.

Although this declaration is not legally binding, it has strong power in terms of accountability and review mechanisms, which are key points in the SDGs.

“The fact that the resource document is based upon officially submitted positions by major U.N. groups and stakeholders gives it quite a strong voice,” Maruxa Cardama, co-chair of the conference declaration drafting committee, told IPS.

“I think that this document can take us very far if we understand the power of soft law and soft policy,” she added.

This year marked the 65th edition of the DPI/NGO conference, which returned to New York after seven years, and registered an unprecedented attendance from civil society: more than 2,000 representatives of international NGOs gathered from more than 100 countries. Among those present, indigenous groups and organisations managed to make a strong case for their inclusion in the development agenda.

Indigenous people are then thrown into mainstream society without the means to survive.

Instead, advocates and representatives say they should be able to give their consent to any reforms that directly or indirectly impact governance in their community, or development in the lands they inhabit.

Harnessing these policies into the development goals of reducing hunger and achieving food security also has great potential.

“Food sovereignty, with the rights and culture-based approach that it encompasses, is a pre-requisite for indigenous peoples’ food security,” Andrea Carmen, executive director of the International Indian Treaty Council (IITC), told IPS.
Indigenous people have lived in a sustainable way for centuries and passed their knowledge from generation to generation, feeding their people without damaging the natural environment. And this is one of the reasons why protecting their culture is crucial, she added.

Not only must these communities be able to access the natural resources but they also have to ensure the learning curriculum for their children includes traditional education and allows kids to spend time with elders to learn about the cycle of life, nature, harvesting and farming.

Their challenge is now to preserve their knowledge and pass it on.

“The knowledge and understanding that we have is really vital […],” Carmen continued. “Maybe the world will look at indigenous people and ask in a respectful way how to grow corn with no water.”

Myrna Cunningham, president of the Centre for Autonomy and Development of Indigenous People in Nicaragua, pointed out that indigenous people are not poor of their own accord, but have been impoverished as a result of the development paradigm that has been imposed on them.

For instance, about 600 indigenous languages have been lost in the past 100 years, roughly one every two weeks. As language is part of the biodiversity indigenous communities preserve, losing language means losing biodiversity. This is necessarily linked to a change in their relationship with the world.

Carmen explained to IPS that there is no translation in indigenous language for words like “intellectual property” or “human rights”, for example. These concepts have to be imported from a different culture.

So things have been literally lost in translation. Paradigms from other languages and cultures have been imposed over a reality that was perceived in a different way for centuries.

Now it is time to revisit this paradigm, as the world prepares for a decade of inclusive and sustainable development.