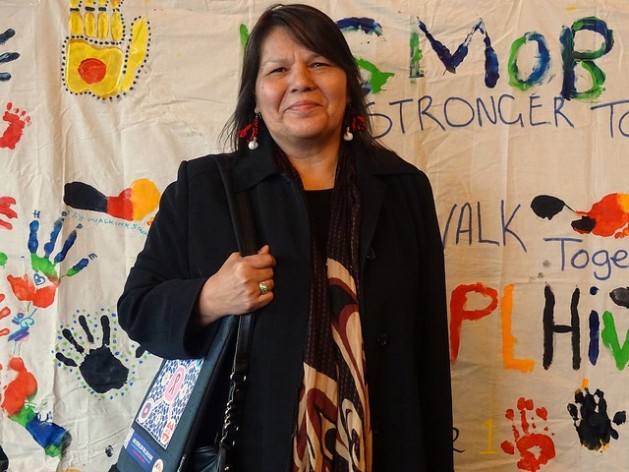 Doris Peltier, Aboriginal Women and Leadership Coordinator with CAAN, was diagnosed with AIDS at the age of 44. Credit: Neena Bhandari/IPS

SYDNEY, Jul 21 2014 (IPS) - Marama Pala, hailing from Waikanae on the west coast of the North Island of New Zealand, was diagnosed with HIV at 22. The news of her diagnosis spread like wildfire in her tight-knit Maori community.

That was in 1993 but even today, she says, there is a “shame and blame” attitude surrounding HIV, which disproportionately impacts the region’s indigenous population.

“If you are HIV positive, you are seen as ‘dirty’, as someone who must be a drug user or a prostitute. Our people are not seeking help because of this stigma, discrimination and criminalisation – the fear of being charged, hunted down, ostracised or put in jail,” says Pala, who, together with her Pacific Islander HIV-positive husband, runs the INA (Maori, Indigenous, South Pacific) HIV/AIDS Foundation.

“We can’t just pretend that HIV/AIDS exists in isolation. The problem of social justice is systemic. We have to encourage nation states to follow the recommendations from the United Nations Declaration on the Rights of the Indigenous People." -- Trevor Stratton, IIWGHA Coordinator for the Canadian Aboriginal AIDS Network (CAAN)
The Foundation takes a cultural approach to HIV/AIDS awareness, education, prevention and intervention.

“In the past five years the number of new infections has […] increased in the Pacific Island community living in New Zealand and especially among the Maoris because we are late testers. People who [engage] in risky behaviour [seldom] get tested until they are very, very sick,” Pala, a mother of two, tells IPS.

“Our women are dying because they are afraid to go on medication, partly because they are afraid of the stigma and discrimination. Antiretroviral drugs are widely available in our country and they should not be dying in this time and age,” says Pala, who is a member of the board of directors for the International Council of AIDS Service Organisations (ICASO).

With HIV and AIDS disproportionately affecting indigenous people across the world, there is a strong need for culturally appropriate programmes designed, championed and delivered by indigenous people, activists and experts say.

Many indigenous women are living in silence with even their immediate families not knowing that they have HIV.

“There are 130 aboriginal women who are living with HIV in Australia, but apart from myself there is only one other woman who speaks openly about living with HIV,” says Michelle Tobin, who contracted the disease at the age of 21.

She began dating a man who told her that he had HIV but “I was naïve and just believed that it wouldn’t happen to me,” she admits. “Within six months I was diagnosed with HIV. I had a baby so I focused all my attention on her.”

“In the early 1990s in Melbourne we weren’t offered treatments when we were first diagnosed. In those days we lost a lot of people in the early stage of the disease, including my late husband,” Tobin, who belongs to the Yorta Yorta Nation, tells IPS.

As a descendant of the Stolen Generation and an aboriginal woman living with HIV and now AIDS, she has experienced stigma and discrimination, especially from within her own family, who disowned her.

Some in her community still think she is contagious and don’t want to be near her, but her struggle has made Tobin a passionate and vocal advocate for indigenous women living with HIV/AIDS.

According to Tobin, chair of the Anwernekenhe National HIV Alliance and a committee member of PATSIN (Positive Aboriginal Torres Strait Islander Network), “Aboriginal women are a minority within the minority of the HIV epidemic. We need more resources and funding [to] enable women to speak out about prevention, treatments, isolation, confidentiality, housing and the whole spectrum of issues that impact us.”

In addition to endorsing targets set out in the United Nations Political Declaration on HIV and AIDS, Australia has also adopted the Eora Action Plan on HIV 2014, which sets strategic targets to bring greater attention to HIV prevention, including best clinical care for aboriginal and Torres Strait Islander peoples living with HIV.

It highlighted the need for increased epidemiological data with a focus on indigenous ethnicity. Lack of data about the level of treatment take-up amongst indigenous people living with HIV is posing a challenge for Treatment as Prevention (TasP) strategies.

“We have evidence in Canada that aboriginal people are getting HIV three-and-a-half times faster than the rate of the general population,” Trevor Stratton, IIWGHA Coordinator for the Canadian Aboriginal AIDS Network (CAAN), tells IPS.

“We believe those trends exist all over the world, but we don’t have the epidemiological data. We are advocating for epidemiological evidence as that is what we need for the dominant cultures to recognise us as a key population at greater risk of HIV and AIDS along with gay men and sex workers, so governments can free up the money for us and we can create our own solutions,” he asserts.

Forty-nine-year-old Stratton, a citizen of the Mississaugas of the New Credit First Nation, Ontario, with mixed English and Ojibwe heritage, was diagnosed with HIV in 1990.

He believes that indigenous people are particularly vulnerable due to “colonisation, neo-colonialism, resource extraction, and assimilation amongst other similar issues” that push them down on social determinants of health and put them at higher risk of all poor health outcomes.

According to the Australian Bureau of Statistics, the rate of HIV diagnoses among Aboriginal and Torres Strait Islander women was substantially greater than among Australian-born non-Indigenous women (1.5 compared with 0.4 per 100,000 population).

“We can’t just pretend that HIV/AIDS exists in isolation,” Stratton says. “The problem of social justice is systemic. We have to be able to leverage international human rights mechanisms so countries can be held accountable.

“We have to encourage nation states to follow the recommendations from the United Nations Declaration on the Rights of the Indigenous People and the International Labour Organisation’s Convention 169, which talks of how to engage indigenous people,” he concludes.

IIWGHA has been working at increasing knowledge and addressing the entrenched stigma of HIV and AIDS within indigenous communities and supporting indigenous-directed research and awareness initiatives.

Its mandate and strategic plan are based on the 2006 ‘Toronto Charter: Indigenous People’s Action Plan’ that acknowledges the right of indigenous peoples to autonomy, social justice and human rights.

Doris Peltier, Aboriginal Women and Leadership Coordinator with CAAN, has been working with women living way below the poverty line, some of whom had their children taken away when they were diagnosed with HIV.

Diagnosed with AIDS at the age of 44 while actively using drugs in Toronto, Peltier believes systemic issues – such as the fear of losing one’s child to the authorities – act as barriers preventing people from discussing their condition.

“A social system that is supposed to be there to support women is actually the one that is putting barriers up for the women,” Peltier tells IPS.

When she decided to go home and reconnect with her family and her First Nations community in Wikwemikong, Ontario, some supported her but others remained reluctant to embrace her.

People wouldn’t let her use their dishes and asked her to clean the toilet after use.

“Soon rumours began to circulate and one of the words being used to talk about me was ‘Wiinaapineh’ (dirty disease). I stood my ground and became better with medication, and my family’s support and encouragement,” Peltier says.

“People have to know that there is help available, there is treatment and prevention and that they can have a good quality life,” concludes Peltier, who is today a great-grandmother.

For her, one of the key responses to high rates impacting indigenous women is to empower them to tap into their inner strength and resilience, and break the code of silence to speak up about HIV/AIDS