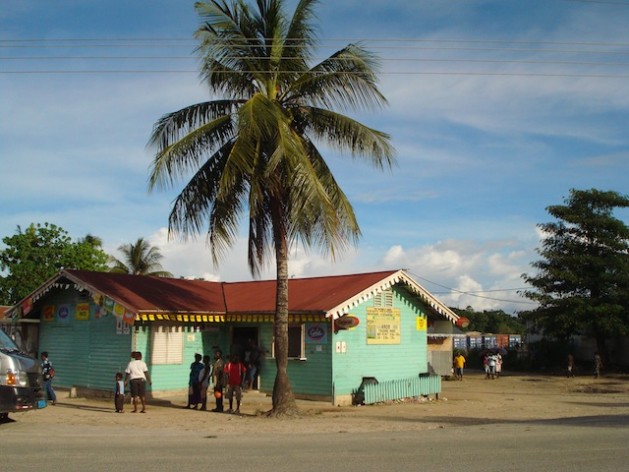 The northern town of Buka was the focus of attention when the newly elected third Autonomous Bougainville Government was inaugurated on Jun. 15. Credit: Catherine Wilson/IPS

CANBERRA, Australia, Jun 24 2015 (IPS) - A referendum on independence within the next five years dominated campaigning in the recent general election held in Bougainville, an autonomous region of 300,000 people in the east of Papua New Guinea (PNG), which emerged from a decade-long civil war 15 years ago.

John Momis, a former Catholic priest who has been prominent in national politics for more than 40 years, was re-elected as president, acquiring 51,382 votes, well ahead of his nearest rival with 18,466.

“We are on the threshold of perhaps the most important and portentous five years in our history and to achieve all that is necessary in that period will require great unity, a tremendous sense of purpose, intense energy and an unwavering commitment to the course we intend to follow." -- John Momis, newly-elected president of Bougainville
He is Bougainville’s most experienced politician and peacetime leader and has won two of the three elections held since the formation of the Autonomous Bougainville Government (ABG) in 2005.

“We are on the threshold of perhaps the most important and portentous five years in our history and to achieve all that is necessary in that period will require great unity, a tremendous sense of purpose, intense energy and an unwavering commitment to the course we intend to follow,” Momis stated during the inauguration ceremony of the new government in the northern town of Buka on Jun. 15.

For the majority of candidates and more than 172,000 enrolled voters, the referendum, provided for in the 2001 Bougainville Peace Agreement, symbolises their long held desire to reclaim political and economic control over the islands.

For more than a century, Bougainville was administered by Germany, Britain and then Australia before being incorporated into the state of Papua New Guinea upon its independence in 1975.

Then from 1989 to 1997 armed conflict erupted over grievances about inequity and environmental damage associated with the Panguna copper mine in Central Bougainville, operated by the Australian-owned Rio Tinto subsidiary, Bougainville Copper Ltd, which further entrenched indigenous resolve for autonomy.

More than 50 percent of the mine’s revenues of around two billion dollars from 1972 to 1989 were claimed by British mining giant, Rio Tinto, and 19.06 percent by the PNG Government. Now the people of Bougainville want ownership of the region’s development and its benefits.

Peter Arwin, a landowner in Central Bougainville, told IPS that he “would like to see the government entering into serious negotiations on referendum and eventual independence for Bougainville as this will give the landowners opportunity to take part in independent decisions over our resources.”

Women are adamant, too, that their voices will be heard in public debate and decision-making after they were successful in gaining four of the 39 parliamentary seats. Three of the 35 female candidates took reserved seats and a fourth, Josephine Getsi, won the open constituency of Peit in Buka.

Barbara Tanne, executive officer of the Bougainville Women’s Federation, said that the government must “focus on the path to achieving a peace at the end by addressing the three pillars of the peace agreement” by 2020, the date by which the referendum is to be held. These include good governance and successful disarmament.

Recent reports indicate that about 2,000 arms are still in the possession of communities and former militia groups and restoring unity across the region through post-conflict reconciliation remains an ongoing process.

From the grassroots to the elite, expectations of independence as the key to a better future and the improvement of people’s lives are immense and the incoming government has acknowledged the challenges.

“Since the late 1990s we have made progress in restoring health and education services destroyed during the conflict. But service standards are worse than before the conflict. The ABG [Autonomous Bougainville Government] must solve the problems faced by our people,” Momis declared during his inauguration speech.

An urgent priority is addressing high unemployment and illiteracy among youth who make up more than 50 percent of the population. Meanwhile an estimated 56 percent of people in Central Bougainville do not have access to safe drinking water, and hardship in families is being impacted by violence against women, worsened by untreated post-conflict trauma.

The first hurdle to surmount is, even with a majority yes vote at referendum, full self-government depends on a joint agreement with the PNG government that the conditions of the peace agreement have been met.

Fiscal self-reliance – crucial for delivering infrastructure and services – is another, with 89 percent of the Bougainville government’s revenues last year, totaling 312 million kina (114 million dollars), provided by the PNG Government and international donors.

Options debated by the region’s leaders for increasing government revenues include a return to mining and developing the agricultural industry.

Over the next half decade, the new autonomous government has much to live up to, most of all the people’s hopes and dreams of progress toward equality and inclusive development.