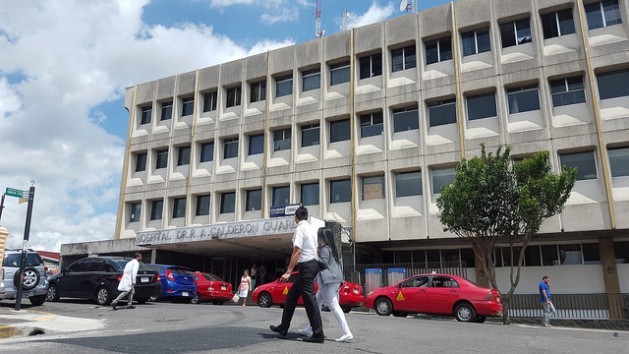 In public hospitals in Costa Rica, like the Rafael Ángel Calderón hospital in San José, there is no protocol regulating legal therapeutic abortion, for doctors to follow. As a result, physicians restrict the practice to a minimum, leaving women without their right to terminate a pregnancy when their health is at risk. Credit: Diego Arguedas Ortiz/IPS

SAN JOSE, Jun 24 2015 (IPS) - The lack of clear regulations and guidelines on therapeutic abortion in Costa Rica means women depend on the interpretation of doctors with regard to the circumstances under which the procedure can be legally practiced.

Article 121 of Costa Rica’s penal code stipulates that abortion is only legal when the mother’s health or life is at risk. But in practice the public health authorities only recognise risk to the mother’s life as legal grounds for terminating a pregnancy.

“The problem is that there are many women who meet the conditions laid out in this article – they ask for a therapeutic abortion and it is denied them on the argument that their life is not at risk,” Larissa Arroyo, a lawyer who belongs to the Collective for the Right to Decide, an organisation that defends women’s sexual and reproductive rights, told IPS.

“The problem isn’t the law, but the interpretation of the law,” said Arroyo.

She and other activists are pressing for Costa Rica to accept the World Health Organisation’s definition of health, which refers to physical, mental and social well-being, in connection with this issue.

Many doctors in public hospitals, unclear as to what to do when a pregnant woman requests an abortion, refuse to carry out the procedure regardless of the circumstances.

Illegal abortion in Costa Rica is punishable by three years in prison, or more if aggravating factors are found.

“It’s complicated because in the interactions we have had with doctors, they tell us: ‘Look, I would do it, but I’m not allowed to’,” said Arroyo.

Others say they have a conscientious objection to abortion, in this heavily Catholic country.

In Costa Rica, abortion is illegal in all other situations normally considered “therapeutic”, such as rape, incest, or congenital malformation of the fetus.

Activists stress the toll on women’s emotional health if they are forced to bear a child under such circumstances.

“Many women don’t ask for an abortion because they think it’s illegal,” Arroyo said. “If both women and doctors believe that, there’s no one to stick up for their rights.”

This creates critical situations for women like Ana and Aurora, two Costa Rican women who were carrying fetuses that would not survive, but which doctors did not allow them to abort.

In late 2006, a medical exam when Ana was six weeks pregnant showed that the fetus suffered from encephalocele, a malformation of the brain and skull incompatible with life outside the womb.

Ana, 26 years old at the time, requested a therapeutic abortion, arguing that carrying to term a fetus that could not survive was causing her psychological problems like depression. But the medical authorities and the Supreme Court did not authorise an abortion. In the end, her daughter was born dead after seven hours of labour.

The Collective for the Right to Decide and the Washington-based Center for Reproductive Rights brought Ana’s case before the Inter-American Commission on Human Rights (IACHR), as well as that of Aurora, who was also denied the right to a therapeutic abortion.

Her case is similar to Ana’s. In 2012, it was discovered that her fetus had an abdominal wall defect, a kind of birth defect that allows the stomach, intestines, or other organs to protrude through an opening that forms on the abdomen. Her son, whose legs had never developed, and who had severe scoliosis, died shortly after birth.

In 2011, the United Nations Committee on the Elimination of Discrimination against Women (CEDAW) expressed concern that “women do not have access to legal abortion because of the lack of clear medical guidelines outlining when and how a legal abortion can be conducted.”

It urged the Costa Rican state to draw up clear medical guidelines, to “widely disseminate them among health professionals and the public at large,” and to consider reviewing other circumstances under which abortion could be permitted, such as rape or incest.

The international pressure has grown. Costa Rican Judge Elizabeth Odio, recently named to the San José-based Inter-American Court of Human Rights, said in a Jun. 20 interview with the local newspaper La Nación that “it is obvious that therapeutic abortion, which already exists in our legislation, should be enforced.”

“There are doctors who believe therapeutic abortion is a crime, and they put women’s lives at risk,” said Odio.

In March, Health Minister Fernando Llorca acknowledged that “there is now a debate on the need for developing regulations on therapeutic abortion – a debate that was necessary.”

Activists are calling for a protocol to regulate legal abortion, established by the social security system, CCSS, which administers the public health system and health services, including hospitals. But progress towards a protocol has stalled since 2009.

“For several years we have been working on a protocol with the Collective and the CCSS,” said Ligia Picado, with the Costa Rican Demographic Association (ADC). “But once it was completed, the CCSS authorities referred it to another department, and the personal opinions of functionaries, more emotional than legal, were brought to bear.”

The activist, a member of one of the civil society organisations most heavily involved in defending sexual and reproductive rights, told IPS that “the problem is that there is no protocol or guidelines that health personnel can rely on to support the implementation of women’s rights.”

Picado said the need for the protocol is especially urgent for women whose physical or emotional health is affected by an unwanted pregnancy and who can’t afford to travel abroad for an abortion, or to have a safe, illegal abortion at a clandestine clinic in this country.

Statistics on abortions in this Central American country of 4.7 million people are virtually non-existent. According to 2007 estimates by ADC, 27,000 clandestine abortions are practiced annually. But there are no figures on abortions carried out legally in public or private health centres.

Groups of legislators have begun to press the CCSS to approve the protocol, and on Jun. 17 the legislature’s human rights commission sent a letter to the president of the CCSS.

“We hope the CCSS authorities will realise the need to issue the guidelines so that doctors are not allowed to claim objections of conscience and will be obligated to live up to Costa Rica’s laws and regulations,” opposition lawmaker Patricia Mora, one of the authors of the letter, told IPS.