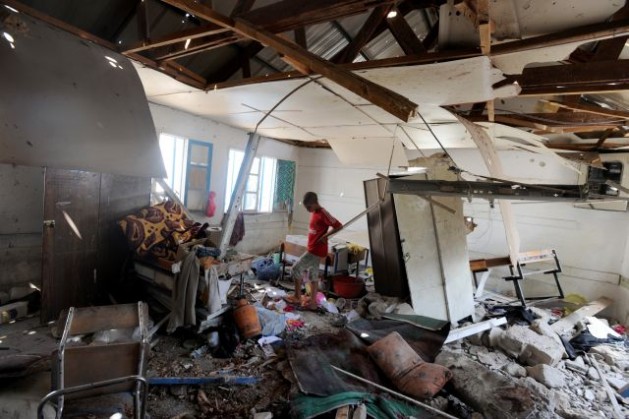 A Palestinian student inspects the damage at a UN school at the Jabalia refugee camp in the northern Gaza Strip after the area was hit by Israeli shelling on July 30, 2014. Credit: UN Photo/Shareef Sarhan

UNITED NATIONS, Jun 8 2015 (IPS) - Secretary-General Ban Ki-moon, reportedly under heavy pressure from the United States and Israel, has decided not to blacklist the Jewish state in an annex to a new U.N. report on children victimised in armed conflicts.

Perhaps in an apparent attempt to be even-handed, he has also excluded Hamas, the Palestinian militant organisation which battled Israel in a 50-day old conflict in Gaza last July.

“Facts and consistency dictated that both be included on the list, but political pressure seems to have prevailed." -- Philippe Bolopion of HRW

But an Arab diplomat told IPS any subtle attempt at comparing the two is “far off the mark.”

“It is inconceivable why the secretary-general should be caving in to political pressure, and more so, since he is on his way out,” said the Arab envoy.

“Is he planning to run for a third term in office?” he asked sarcastically.

Ban ends his second term as secretary-general in December 2016 and is rumoured to have plans to run for the presidency of his home country, South Korea.

Nadia Hijab, executive director of Al-Shabaka: The Palestinian Policy Network, told IPS that Ban Ki-moon clearly succumbed to U.S. and Israeli pressure by not naming Israel or Hamas in the so-called “List of Shame” despite urging by rights groups such as Human Rights Watch.

What this whole episode demonstrates, however, are the limits of the “both sides” approach when applied to the Israeli-Palestinian conflict, she said.

“Yes, absolutely, both sides violate international law in their indiscriminate attacks on civilians, with the harm done to civilians far greater on Israel’s side. But only one side is occupying the other,” she pointed out.

“In short, there would be no list of shame at all on this issue without Israel’s occupation,” she declared.

James Paul, who monitored U.N. politics for over 19 years as executive director of the New York-based Global Policy Forum, told IPS the U.N.’s human rights programmes and policies have often been subject to pressures and censorship by powerful member states.

He said reports concerning Israel or referring to abuses by Israel have been especially exposed to such pressure from Washington.

The latest example, the report on ‘Children and Armed Conflict’, confirms this sorry pattern and damages still further the U.N.’s reputation in the turbulent Middle East, he added.

In spite of well-documented and consistent rights abuses of children, taking many forms, it appears that the secretary-general has decided to censor the draft and let Israel off the hook, said Paul.

“No wonder High Commissioners for Human Rights have had such short tenures, while the whole human rights enterprise at the U.N. is tarnished,” Paul said.

He asked: “Who is thinking about the ability of the U.N. to take leadership in the Middle East conflicts or to defend children in other sensitive zones?”

Luckily, he said, the truth is now well-known and Washington’s censorship will no longer keep it from the attentive global public.

When Ban decided to remove Israel and Hamas from the list, he was rejecting a recommendation by his Special Representative for Children and Armed Conflict, Leila Zerrougui of Algeria, who included both in the annexed list of non-state actors and rebel groups accused of repeated violations against children.

It is a blow to U.N. efforts to better protect children in armed conflict, he said.

“Facts and consistency dictated that both be included on the list, but political pressure seems to have prevailed. We expected better from a Secretary-General who promised to put ‘human rights up front’,” Bolopion said.

In the body of the report itself, Ban was critical of Israeli actions, specifically during the Gaza conflict.

“I urge Israel to take concrete and immediate steps, including by reviewing existing policies and practices, to protect children, to prevent the killing and maiming of children, and to respect the special protections afforded to schools and hospitals,” Ban said.

“An essential measure in this regard is ensuring accountability for perpetrators of alleged violations. I further urge Israel to engage in a dialogue with my special representative and the United Nations to ensure that there is no recurrence in grave violations against children,” he added.

At a press conference Monday, U.N. spokesperson Stephane Dujarric faced a barrage of questions on the secretary-general’s decision to exclude Israel and Hamas from the list.

“Was he under pressure from the United States? What is the rationale for keeping Israel and Hamas out of the list? Does the annex carry the same weight as the report itself?

Dujarric told reporters: “I don’t think anyone was taken on or off.”

The report, he said, is the result of a consultative process within the house. Obviously, it was a difficult decision to take. The Secretary‑General took that decision, he said.

“But, I think what’s important to note is that the report that was shared today is much more than a list.

“It has a large… large report outlining issues raised [like] the shocking treatment of children and the suffering of children that we’re seeing throughout conflict zones including what happened in Gaza and other parts of the State of Palestine.”

“I think in the body of that report, the Secretary‑General expresses his deep alarm at the extent of grave violations, unprecedented and unacceptable. So, I think I would just… I would encourage everyone to not focus so much on the list, but on the report as a whole. And the report, as I said, is much more… much more than the list,” Dujarric said.

Responding to the charges in the report, Israel’s Ambassador to the United Nations, Ron Prosor, said Ban was right “not to submit to the dictates of the terrorist organizations and the Arab states, in his decision not to include Israel in this shameful list, together with organisations like ISIS, Al Qaeda and the Taliban.”

However, the United Nations still has a long way to go, he said.

Instead of releasing thousands of reports and lists against Israel, the U.N. must unequivocally condemn the terrorist organisations that operate in the Gaza Strip, he added.