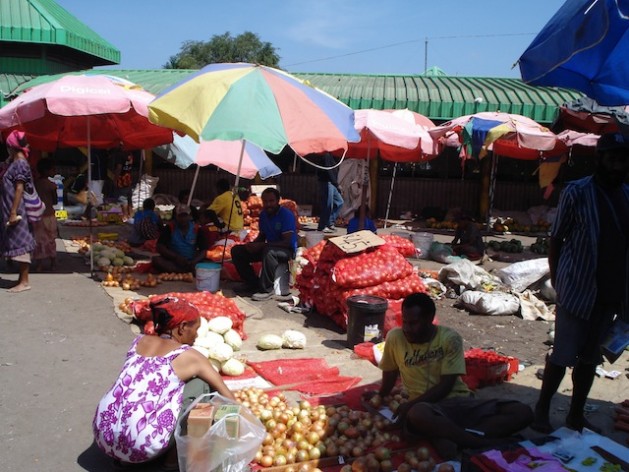 With the Pacific Islands holding a tiny 0.05 percent share in world trade, Edwini Kessie, the Pacific Islands’ chief trade adviser, told IPS the pact could lead to their integration “in regional and global supply chains and enable them to enhance their participation in international trade.”

"PACER Plus is definitely not for Papua New Guinea. The destruction of people’s lives and resources of this country is the result of such agreements, which do not benefit our people." -- John Chitoa, coordinator of the Bismarck Ramu Group
PACER Plus talks follow the 2001 Pacific Agreement on Closer Economic Relations (PACER) between the same countries. It intends to go further than a standard trade agreement to include the movement of goods, services such as education and health, and investment with additional discussions about increased labour mobility and development assistance to small island states.

But the Fiji-based Pacific Network on Globalisation (PANG), along with 32 other civil society organisations from countries such as Papua New Guinea, Vanuatu and Samoa, are unconvinced by the spin and have launched a protest with the ‘Tabu PACER Plus’ campaign.

“PACER Plus is sold as a development agreement for the Pacific, but current proposals see the Pacific missing key flexibilities that apply to Least Developed Countries. This means that some of the smallest economies in the world will be expected to make the same levels of binding restrictions on how they can regulate as their bigger neighbours,” Maureen Penjueli, PANG’s coordinator, said in an April statement.

PANG claims the agreement will deliver more markets to the Australasian nations with little in return for developing island states, which presently have limited export commodities and under-developed local industries.

PACER Plus negotiations have been underway for seven years and are expected to conclude by mid-2016. But PANG is calling for Pacific Island leaders to end talks now.

“Leaked text [of the agreement] has confirmed a lot of our fears about what it will mean for Pacific communities […]. By not signing up to PACER Plus many of the Pacific countries will be able to develop their local industries the way Australia and New Zealand did, by protecting and nurturing them until they are able to compete on the global stage,” a PANG spokesperson told IPS.

The islands’ main exports are raw materials like timber, sugar, palm oil, fish, coffee, cocoa, and mineral resources from Melanesian countries, destined for Australasia, the United States, the European Union and Asian countries where profits are made from value-adding.

In Tonga, a South Pacific archipelago nation comprised of 177 islands, exports of goods and services comprise 17 percent of gross domestic product (GDP) in contrast to imports at 63 percent, while exports from the Cook Islands totalled 4.2 million U.S. dollars in the September Quarter of last year, a fraction of its imports worth 23.4 million U.S. dollars.

“After more than a decade of trade liberalisation resulting in broad-ranging goods market access, most regional countries continue to run trade deficits as they have since Independence” and in a “woefully under-developed environment, new foreign competition will do little to generate growth,” reports the Pacific Institute of Public Policy (PIPP) in Vanuatu.

Pacific Islands have had duty free access to Australia and New Zealand since 1981 under the South Pacific Regional Trade and Economic Cooperation Agreement (SPARTECA).

Competing equally in global trade is a challenge given the islands’ geographic isolation from main markets and lack of economies of scale in production exacerbated by insufficient infrastructure and small labour forces.

According to Kessie, “The focus should not be on trade deficits, but whether PACER Plus will overall improve the competitiveness of Pacific economies.”

However, it could take years before local industries are on a competitive standing with their larger neighbours. Even then the gap between the high cost of production in the Pacific and world prices for manufacturing and services is unlikely to narrow dramatically, predicts the World Bank.

Trade discussions aim to encourage more donor assistance from Australia and New Zealand to improve the Pacific’s productive capacity. Although this is less than assured, as neither Australasian country will be legally bound to promises of more aid or labour mobility, even though all parties will make binding commitments on market access for goods, services and investment.

Ultimately Pacific islanders see international pressure resulting in their economies opening up further to free trade before they are ready.

The consequences, according to activists, could be increased inequality if an influx of cheap imported goods crushes local enterprises and unemployment rises.

Lowering the regulation of foreign investors to increase the inflow of investment also has islanders concerned about threats to indigenous communities from potential loss of decision-making rights about land use and higher impunity for corporate human rights and environmental abuses.

“PACER Plus is definitely not for Papua New Guinea. The destruction of people’s lives and resources of this country is the result of such agreements, which do not benefit our people,” John Chitoa, coordinator of the Bismarck Ramu Group, a civil society organisation in the country’s Madang Province and member of the PANG coalition, told IPS.

Papua New Guinea has attracted the highest levels of direct foreign investment in the region, averaging more than 100 million U.S. dollars per year since 1970. Yet the proportion of the population living below the poverty line has risen from 29.5 percent in 1981 to 40 percent today and most people live without adequate basic services.

Larger volumes of imported processed foods, such as fatty meats, instant noodles, carbonated drinks and alcohol, could also put health outcomes at risk. Dietary habits are strongly linked with the current epidemic levels of Non-Communicable Diseases (NCDs), such as heart disease and diabetes, which account for 75 percent of all deaths in the Pacific.

Kessie responded that PACER Plus will allow “countries to impose strict health standards on imported food, provided they have scientific justification.”

However, Tabu PACER Plus campaigners say this is not enough and are calling for full social, cultural, environmental and human rights impact assessments of the agreement before negotiations go any further.