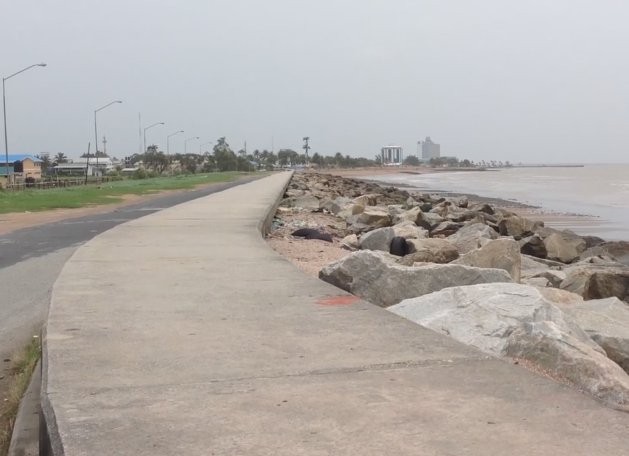 In Guyana the coastal belt is protected by seawall barriers that have existed since the Dutch occupation of the country, keeping the coastline as in tact as possible. Credit: Desmond Wilson/IPS

Jun 25 2015 (IPS) - Guyana’s new president, David Granger, sits down with IPS correspondent Desmond Brown to talk about how his country is preparing for climate change – and hoping to avert the worst before it happens.

Nearly 90 per cent of Guyana’s population lives on a narrow coastline strip a half to one metre below sea level. That coastal belt is protected by seawall barriers that have existed since the Dutch occupation of the country. In recent times, however, severe storms have toppled these defences, resulting in significant flooding, a danger scientists predict may become more frequent.

The government is now spending six million dollars annually on drainage and irrigation and requires some 100 million dollars to adapt its drainage infrastructure to deal with the effects of climate change.

Mister Granger what would you say are the primary challenges for Guyana as a result of climate change? 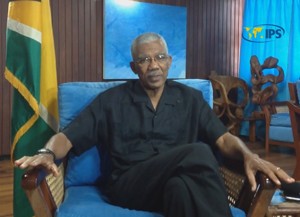 President David Granger of Guyana knows how important mitigating climate change is and the need to protect his country’s shores. Credit: Desmond Wilson/IPS

So when we speak of climate change we are speaking of very complex geographical phenomena, it is not just one, although we don’t have the experience of damages of hurricanes or volcanoes or quakes, we do have very complex weather patterns, up to a month ago there was a drought and now there’s a flood, sometimes we can move from one extreme to the next. So these factors are complicated by the exploitation of some of our resources for example timber. And as you know we are part of the Amazonian rainforest and to the extent that we cut down our trees, it could lead to all sorts of environmental problems, desertification and to the extent that there’s mining that could lead to the contamination of our rivers. So these are other matters that concern us because with the changing climate it means that eventually temperatures could become higher and hotter and life as we know it less comfortable. We need the trees. The trees are the lungs of the earth so we need to be careful that we do not damage our forests, so those are some of the main challenges those are some of the main concerns.

IPS: What then would be your administration’s policy on this the issue of climate change?

DG: Well of course we have to plan a policy or we have to chart a course that protects our citizens and traditionally as far as coastal zone management is concerned we have had to build sea defenses and build proper drainage and irrigation works, otherwise our people would be flooded up. We had a terrible flood exactly 10 years ago and this is the tenth anniversary of 2005 and in many of the communities on the coast we lost billions of dollars because of the flood so we have to protect our people from that type of catastrophe. We just have to continue what we’ve been doing traditionally, building sea walls, but we also have to implement plans to prevent the excessive cutting down of all trees and of course re-forestation to plant back areas that have been mined-out in the mining areas or the trees that have been cut down in the forested areas.

IPS: What kind of strategies and action plans would you say are needed to deal with the effects of climate change in Guyana?

DG: First of all it’s coastal-zone management, as you know much of the coastline of Guyana is below the level of the ocean at tide watermark, and as the oceans rise there is evidence that the entire coastal zone is under threat, as you drive along the coast you’d see that the Dutch had to establish concrete walls, sea walls and from time to time those walls are damaged by the fierce tides, the waves of the Atlantic they come crumbling the skids so that’s very expensive to maintain and that’s the ever-present threat, sea-level rising towards sea defenses, accompanying that of course is drainage when the water comes on the land it has to be removed, the most efficient way of removing it is with mechanical drainage, using pumps and that too is a great challenge because it’s a very expensive job and then the accessories for the surplus water on the land we have to use mechanical means to remove it. Apart from that Guyana has always been susceptible to variations in climate.

IPS: On the issue of funding most countries in the region say they don’t have the funds necessary to adapt to climate change, what’s the situation for Guyana?

DG: Well we’ve been a beneficiary of some grants from Norway and we are aware of this problem, it is not a new problem as I said it’s something that has existed from time immemorial. We’ve always had the cycle of droughts and floods just like other countries in the Caribbean and have to prepare for hurricanes, we just have to prepare for climate change, so I don’t regard this as something we should be alarmed about. The big expenditure will come if we ever have to move from the coastline and go for the inland which is higher, most of the inland territory maybe 50km from here so most of the territory is higher and the sort of doomsday scenario is that you may have to abandon some part of the coastline and that would be a tremendous cost, that would be something that we don’t want to contemplate. But you can never tell when a catastrophe could strike but I would say that as part of our policy which we’ve already announced that profits and revenues from extractive industries, gold, timber, diamonds, bauxite would be used in something called the “Sovereign Wealth Fund” so that our children don’t have face the ravages of poverty. What I’m saying is something that we have to include in our calculations in our budgets but I mention the Sovereign Wealth Fund and I mention we must start putting aside money in order to prepare for any form of catastrophe, we can’t depend on handouts all the time, but yes if we had to move it would be a tremendous cost. If we had a flood it will be at a tremendous cost and even drought is a tremendous cost.