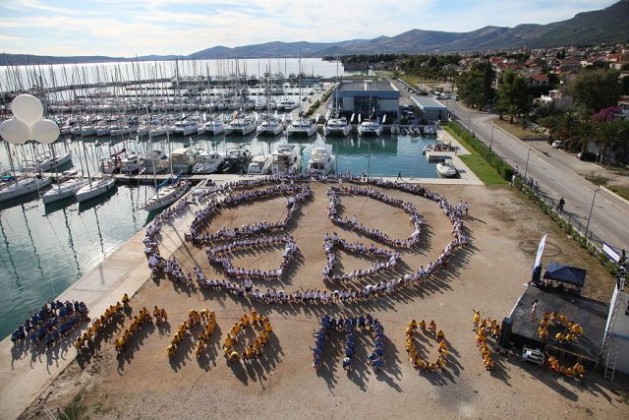 A peace sign formed by people in Croatia. Credit: Teophil/cc by 3.0

UNITED NATIONS, Jun 12 2015 (IPS) - When Denmark hosted the World Summit on Social Development (WSSD) in March 1995, one of the conclusions of that international gathering in Copenhagen was to create a new social contract with “people at the centre of development.”

But notwithstanding the shortcomings in its implementation over the last 20 years, the United Nations is now pursuing an identical goal with a new political twist: “global citizenship.”

“Our world needs more solar power and wind power. But I believe in an even stronger source of energy: People power.” -- U.N. Secretary-General Ban Ki-moon

Reaffirming the opening line of the U.N. Charter, which says “We the Peoples”, the United Nations is adding the finishing touches to its post-2015 development agenda – even as there are increasing demands from civil society organisations (CSOs) to focus on issues relating to people, including poverty, hunger, unemployment, urbanisation, education, nuclear disarmament, gender empowerment, population, human rights and the global environment.

Speaking at the 20th anniversary of WSSD, Ambassador Oh Joon of the Republic of Korea and Vice President of the U.N.’s Economic and Social Council (ECOSOC) said while one of the three major objectives of the Copenhagen Social Summit – poverty eradication – was incorporated into the Millennium Development Goals (MDGs) adopted in 2000, the other two – productive employment and social integration – were not.

“An integrated approach advocated at the Social Summit to simultaneously pursue the three key objectives was left behind,” he told an ECOSOC meeting last week.

“There was a need to re-examine where the new United Nations development agendas would come from,” the Korean envoy said.

Economic growth in itself, while necessary, was not sufficient to reduce poverty and inequality, he said, stressing the need for strong social policies, as well as inclusive and sustainable development.

Similarly, there were many links among social, economic and environmental fields that must be effectively addressed, he added.

Meanwhile, the concept of global citizenship has taken on added importance, particularly on the eve of the adoption of the post-2015 development agenda which is expected to be approved at a summit meeting of world leaders in September.

Asked how relevant the concept was in the post-2015 context, Roberto Bissio, executive director of the Third World Institute, a non-profit research and advocacy organisation based in Uruguay, told IPS: “If by citizenship we mean rights, and in particular the right to bring governments to account, and decide how taxes are used, we are very far from global citizenship.”

In fact, he said, there is little talk of citizenship in the current discussions around the Financing for Development (FfD) conference in Addis Ababa in July and the September summit of world leaders on a new development agenda.

Instead, he said, there is a lot of attention being given to “multistakeholderism”.

The notion of “stakeholder”, as opposed to “shareholder,” was originally a way to make corporations more accountable to the people affected by their actions.

Now “multistakeholder governance” in the Internet or in “partnerships” with the United Nations means that corporations will have a role in global governance, without necessarily becoming more accountable in the process, he pointed out.

“This means less rights for citizens, not more,” said Bissio, who also coordinates the secretariat of Social Watch, an international network of citizen organisations worldwide.

On the other hand, he said, if the FfD conference approves a U.N. mechanism for tax collaboration between countries to counter widespread tax evasion by multinational corporations, citizenship (including the elusive ‘global citizenship’ concept) may emerge strengthened.

Pointing out the successes of people-oriented policies, Eduardo Frei Ruiz-Tagle, former president of Chile, said when he was the leading his country in 1995 he had supported several initiatives to promote democracy and social justice.

The WSSD, he said, was the largest meeting of heads of state that resulted in shaping a new model of development that would create progressive social equity that addressed imbalances around the world.

“The human being was placed at the centre of development, as reflected in the World Summit action plan,” he said.

Highlighting achievements resulting from implementing the plan, he said Chile had increased investments in social development and was, under current President Michelle Bachelet, continuing to do so in order to address inequality.

While Latin America had reduced poverty, it remained “more unequal” than other regions and currently, 28 per cent of its population of 167 million lived in poverty, with 71 million living in extreme poverty, he said.

But some of the pressing tasks, he said, included thinking about a new fiscal pact and tax reform that would improve income distribution in order to avoid “false” development. Corruption and institutional reform also needed to be addressed.

“As such, the World Social Summit remained as valid today as in 1995,” he said.

Going forward, combatting poverty and inequalities required an ethical foundation and a sustained effort. At this crossroad, it was time that governments gave more impetus to that “moral movement”, the former Chilean president said.

Juan Somavia, a former director-general of the International Labour Organisation (ILO) and ex-Permanent Representative of Chile to the United Nations, told the ECOSOC meeting the yet-to-be-finalised “zero” draft of the new post-2015 agenda recovered the spirit and dynamism of the 1990s and was a good basis for negotiations.

“The document reflected a supremely ambitious vision, with its 17 goals and 69 indicators focused on a people-centred poverty-eradication sustainable development concept,” he noted.

With regard to challenges, he said, policy support from the United Nations would be critical.

Since the world had discussed the three elements of sustainable development but had not yet implemented them, the basic challenge ahead was to ensure integrated thinking and to shape methods for using it to clearly explain the types of interactions between the agenda’s three pillars that were needed to fulfil commitments, he declared.

That difficult task required an initiative from the U.N. secretariats in New York and Geneva, its Funds and Programmes and the multiple networks in regions in which the organisation operated, he said.

Unless that process began immediately after the new agenda was adopted, the “goods” would not be delivered, Somavia warned.

That initiative would also require the recognition of the balance between markets, the State, society and individuals. “In recent years, people’s confidence in the United Nations had dropped.”

The manner in which the United Nations presented the new agenda was essential in addressing that issue.

As the Social Summit’s Programme of Action had recognized the importance of public trust, he emphasized that the new development agenda must acknowledge and address that current lack of confidence, Somavia declared.