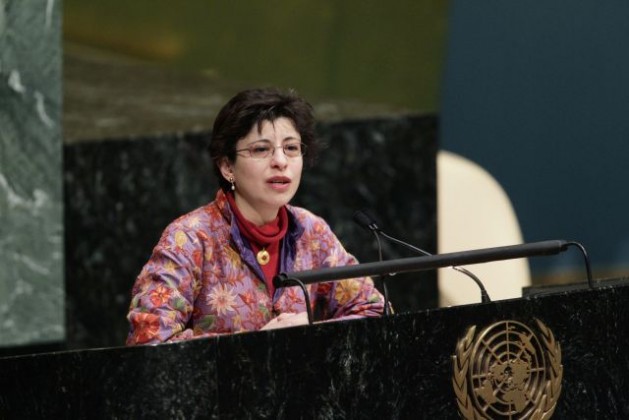 A play on words, the article posited that the shifting sands of geopolitics and concerns surrounding available developmental resources were demanding a rethink of multilateral institutions and traditional forms of developmental partnerships.

The fact is, there is no blueprint for multilateral engagement with religious actors, especially as we live in times in which we confront some of the most paralysing human political, cultural and economic strife, at the hands of other ‘religious actors’.

As part of this re-imagining of global relations, the article argued, religion, and diverse faith-based actors in particular, had to be reckoned with more seriously by policy makers at the United Nations in particular – given the timeliness of the ‘mid-term’ MDG review processes.

The article noted that unless religion was systematically and consistently factored into developmental outreach, policy design, programme implementation, and monitoring efforts, something would continue to be missing in the equation of sustainability of human development processes.

In line with the gist of the article, a United Nations Inter-Agency Task Force on Engaging with Faith-Based Organizations for Sustainable Development was officially formed under the aegis of the U.N. Development Group (UNDG), in 2009, bringing together several U.N. entities (UNFPA, UNICEF, UNDP, WHO, UNAIDS, as well as U.N. Alliance of Civilizations, DESA, UNESCO, UNHabitat and UNEP) with the World Bank as an observer, and headquartered in New York.

The mandate of this body, dubbed the “UN Task Force on Religion and Development” for short, was to seek to share knowledge, and build U.N. staff and systems’ capacities on dealing with faith-based entities, and questions of religion, around the MDGs.

At first, the aspiration of some members of this Task Force was to develop common guidelines for dealing with religious actors, to which the varied U.N. developmental agencies/offices in particular, could sign on to. Very soon it became clear that common guidelines would not be possible.

The Task Force members collaborated to serve as a hub for information and knowledge sharing between and among U.N. agencies and religious NGOs (or faith-based organisations/FBOs) accredited to ECOSOC or to DPI.

“We are open for business,” he said, indicating that these very actors can hold the World Bank accountable, henceforth, for more systematic engagement. The exact modalities of which, it should be noted, are yet to be worked out.

The meeting between WB President Jim Kim and the leaders of major FBOs signals a tipping point in international development, which will be underlined next week, on July 8 and 9, when the World Bank, together with bilateral co-sponsors, international FBOs and aid agencies, will convene a global conference on “Religion and Sustainable Development”.

The conference will focus on eradicating extreme poverty – one of the World Bank’s key objectives and the number one SDG. The objectives of the meeting will be to look at the evidence of faith-based engagement in poverty eradication, specifically in health, humanitarian relief and violence against women; to seek actionable recommendations for scaling up successful work modalities, and to secure more targeted and strategic investment in “faith assets”.

Building a ‘global faith-based movement for sustainable development’ has been mentioned by some of the organisers as one of the outcomes of this gathering. This conference may well mark a turning point in international development speak – from ‘whether/why to engage with faith actors’, to ‘how to engage better’.

The question is whether the conference could signal a moment in the trajectory of international development when ‘engaging with religious actors’ may well become the ‘new normal’?

Immediately following the World Bank meeting, on July 10 and 11, the U.N.’s Inter-Agency Task Force will convene a select number of donors, U.N. agencies and FBO partners, to host its second trilateral policy roundtable also on religion and the SDGs (the first took place in May of 2014).

The objective of this meeting is, put simply, to press the ‘pause’ button, so as to reflect, together, on where this potentially ‘new normal’ could lead us.

Focusing on the ‘governance’, ‘peace and security’ and ‘gender equality’ development goals, and with the relative ‘safe space’ afforded by respecting Chatham House rules, the gathered participants will speak candidly to what each organisation, and policy maker, in each of these ‘sectors’, is facing when religion comes into the mix.

Needless to say, these three developmental goals are where the challenge of religious dogma, harmful practices, and incitement to extremes of violence – to name but a few – are very much at play.

Those of us who have had to do battle inside our own organisations to bring attention to bear on the importance of learned appreciation of the roles of religion know full well how the difficulties posed by some religious ideologies, certain religious organisations, and specific ‘religious’ leaders are not just ‘out there’ in the communities we ostensibly serve, but also form part of the intergovernmental debates which define the organisational mandates we serve.

Part of the claim to success of some FBOs is their age-old capacity to provide social services directed to inequalities among the most hard to reach, and to develop innovative means of resourcing their work – including a capacity to rely on volunteer labour.

At the same time, however, some of the experience of certain U.N. entities –especially around human rights (and women’s rights in particular)- bespeaks serious challenges with certain religious leaders and faith entities.

It is not insignificant that this moment of honest reflection is being sought as the Financing for Development (FfD) conference, with all its attendant disputes among different Member State groupings, is also being enacted.

One of the many critical questions to be debated is whether FfD should have its own follow-up and review process or be merged with the post-2015 process. Also debated are issues of accountability and shared responsibility between and among governments, as well as dynamics relevant to public-private partnerships around human rights.

But where does follow-up, accountability and partnership modalities with faith-based actors fit into these debates?

The fact is, there is no blueprint for multilateral engagement with religious actors, especially as we live in times in which we confront some of the most paralysing human political, cultural and economic strife, at the hands of other ‘religious actors’. So as we undertake to normalise faith-based engagement with multilateralism, we have some serious questions to confront and find answers to together with our faith-based partners.

These include: should we be cautious of seeking to normalize partnerships with faith-based development organizations, and with religious leaders, at a time when some faith-based entities, and certain ‘religious leaders’, are also significantly undermining the very basis of multilateralism based on universal human rights, human development, and peace and security?

How realistic is it to maintain that we are working with the ‘good [faith-based] guys’ only? Or is it (finally) time to be very clear about the means of implementation and accountability of such partnerships, at a U.N.-system wide level?

Given the intergovernmental haggling over means of implementation and the U.N.’s fit for SDG purposes, what are the criteria which will be used to assess whether the U.N., in its current guise, is indeed, fit for the purposes of religious partnerships?