TORIT, Eastern Equatoria, South Sudan , Jul 10 2015 (IPS) - So extreme are gender inequalities in South Sudan that a young girl is three times more likely to die in pregnancy or childbirth than to reach the eighth grade – the last grade before high school – according to Plan International, one of the oldest and largest children’s development organisations in the world.

A vast majority of South Sudanese girls will have been victims of at least one form of gender-based violence in their young lives, but those living in Eastern Equatoria State face a particularly abhorrent practice which is a tradition among at least five of the state’s 12 tribes – being given away as ‘blood money’. 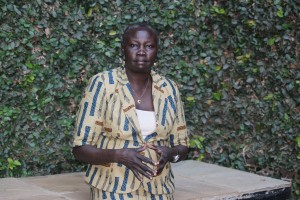 Dina Disan Olweny, Executive Director of the non-governmental Coalition of State Women’s and Youth Organisations, is one of the rights activists pushing for an end to harmful traditions and injustices facing young girls in South Sudan. Credit: Miriam Gathigah/IPS

“When a person kills another person, the bereaved family expects to be given ‘blood money’ as compensation,” Dina Disan Olweny, Executive Director of the non-governmental Coalition of State Women’s and Youth Organisations, told IPS.

Most tribes demand compensation when a life has been taken in one of the regular conflicts over cattle and pasture, revenge killings and other inter-village conflicts, and although 20 to 30 goats is what many tribes demand in form of compensation, Olweny explained that “most families can either not afford or are unwilling to pay so much, and prefer to give away one of their girls as compensation.”

According to child protection specialist, Shanti Risal Kaphle, “a young girl is taken as a commodity that can be given in lieu of someone’s lost life, or as ‘blood money’, to keep the family and community in peace.”

Kaphle explained that the girl’s life is negotiated “without her information and consent and is subject to violence, abuse and exploitation.”

The practice of girl child compensation has not escaped the eye of the government, which set an estimated 500 dollars as the amount for compensation for a life, but tribe people still prefer to be given a girl, saying that the figure set by the government is too little.

“A young girl is taken as a commodity that can be given in lieu of someone’s lost life, or as ‘blood money’, to keep the family and community in peace” – child protection specialist Shanti Risal Kaphle

Experts say that a girl is also preferred as compensation by a bereaved family because she can either be married to one of their own without having to pay a bride price, or she can be married off when she turns 12 and attract a herd of goats.

Many of the girls handed over as compensation are often as young as five years. They are expected to forget their birth families and start afresh, severing all contacts with their natural families once the exchange has been concluded.

At this point their lives can take a dramatic turn for the worse through multiple abuse. These girls may be “subjected to child labour, and to sexual, physical and emotional abuse – to escape this hell, more of them now prefer to commit suicide,” said Olweny.

Residents here say that customary laws which perpetuate and rubber stamp these forms of abuse are seen to play a vital role in conflict resolution because they are considered cheap, accessible and the decisions are made on the basis of customs they are familiar with.

Kaphle said that customary laws and decisions are also perceived as more amicable and less time-consuming.

However, girl child compensation is just one of a multitude of abuses that the girl child in South Sudan faces.

The state of Western Bahr El Ghazal, for example, has a notorious tradition of widow compensation which has seen many young girls denied an opportunity to go to school because they are forced into early marriages.

Linda Ferdinand Hussein, Executive Director of the non-governmental organization Women’s Organisation for Training and Promotion, explained how this tradition works.

“When a man’s wife dies for whatever reasons, the man can demand to be given back the bride price that he had paid.” This price varies from one family to the next “but most families are unwilling to pay back the bride price so they give the man one of the deceased wife’s younger sisters as compensation.”

Four years after South Sudan won its independence and became the world’s youngest nation, child protection specialists like Hussein are raising the alarm. “Gender-based violence against young girls continues to be perpetrated in a variety of ways in both peacetime and during conflict,” she said.

A report released Jun. 30 by the United Nations Mission in the Republic of South Sudan (UNMISS) revealed that the Sudan People’s Liberation Army (SPLA) and associated armed groups recently carried out a campaign of violence against the population of South Sudan, which was marked by a “new brutality and intensity” and included the raping and then burning alive of girls inside their homes.

A report released last year by leading humanitarian organisation CARE, titled ‘The Girl Has No Rights’: Gender-Based Violence in South Sudan, highlighted the extreme injustices faced by young girls in the country.

These injustices continue to serve as obstacles towards accessing education and later exploiting the opportunities that life presents for those who have gone through school.

According to Plan International, 7.3 percent of girls are married before they reach the age of 15 years and another 42.2 percent will have been married between the ages of 15 and 18. And, although 37 percent of girls enrol in primary school, only around seven percent complete the curriculum and only two percent of them proceed to secondary school.