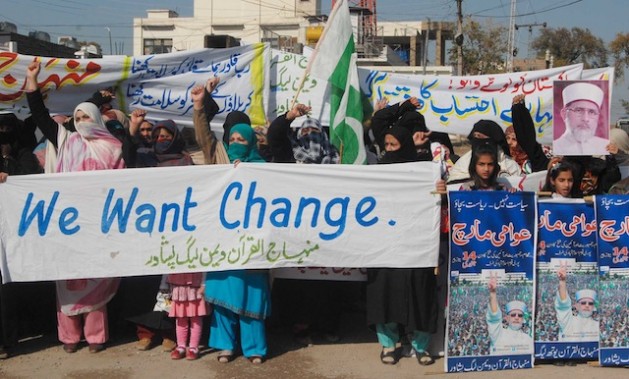 Women and children hold up signs at a rally against corruption in the northern Pakistani city of Peshawar. Credit: Ashfaq Yusufzai/IPS

UNITED NATIONS, Jul 8 2015 (IPS) - A woman is stopped at a checkpoint; she gives birth, and dies. Another is sold in a slave market. A boy is killed by a tank. A young man drowns at sea, trying to reach a haven safe from oppression and poverty.

These were just some of the examples that Rima Khalaf, executive secretary of the Economic and Social Commission for Western Asia (ESCWA), touched on during a panel discussion on the importance of the rule of law held at the U.N. headquarters on Jul. 7.

All too often, however, citizens are either unable or unaware of how to demand their legal rights – be it access to food, jobs or justice.

As the U.N. closes a 15-year chapter of poverty eradication efforts defined by the eight ambitious Millennium Development Goals (MDGs), and moves towards a new, sustainable development agenda, legal experts came together Tuesday to discuss how the rule of law can help bolster the post-2015 blueprint for global change.

Organised by the International Development Law Organisation (IDLO), an intergovernmental body devoted to empowering citizens and enabling governments to establish robust legal systems worldwide, the two-part event series revolved around Goal 16 of the proposed Sustainable Development Goals (SDGs), which aims to build inclusive societies by providing equal justice to all.

Promoting and strengthening the rule law in the realm of international development would seem, as IDLO Director-General Irene Khan pointed out, “a no-brainer”.

The 2015 Rule of Law Index, published annually by the World Justice Project (WJP) crunched data from 100,000 households and 2,400 expert surveys in 102 countries to present a portrait of how ordinary people around the world perceive and experience the rule of law in their everyday lives.

Under these criteria, Denmark bagged the top spot on this year’s index with a score of 0.87, while countries like Afghanistan and Zimbabwe brought up the rear, scoring 0.35 and 0.37 respectively.

Other countries in the top 10 zone include Singapore, Finland and New Zealand, while states like Myanmar, Bangladesh and Uganda live closer to the bottom of the index.

Asian countries featured heavily at the mid-point of the index, with India, Sri Lanka, Thailand, Indonesia and the Philippines occupying spots in the 50-60 range out of 102 surveyed states.

According to the WJP, “the Index is the world’s most comprehensive data set of its kind and the only to rely solely on primary data, measuring a nation’s adherence to the rule of law from the perspective of how ordinary people experience it.”

In reality, however, the SDGs mark the first time that the U.N. has explicitly written the rule of law into its development plans.

“There is a paradox here at the U.N. that bothers me deeply,” Khan said at a panel co-hosted by the IDLO and the Law School of the University of Pennsylvania (Penn Law) Tuesday. “You can almost think of it as parallel railway lines, with two trains hurtling down these tracks through the landscape of the U.N. since its inception.

Since its inception in 1988, the IDLO has remained the only organisation dedicated entirely to promoting the rule of law, repeatedly pushing for effective and accountable legal systems around the world as the basis for eradicating poverty, fighting discrimination and ensuring access to basic services.

It also highlights the links between inequality and lawlessness, where good governance seeps through cracks in weak justice systems, eroding the public’s confidence in the very structures that are designed to ensure their well-being.

Recounting a conversation she had with a chief justice in one of the IDLO’s partner countries, Khan said, “I was told that in this particular country people often say, ‘Why hire a lawyer if you can buy a judge?’ It is these situations that the rule of law addresses.”

In short, she said, the rule of law regulates power, a crucial step in the realisation of the SDGs.

Consider the following example from Uganda, where three-quarters of the population are subsistence farmers and where land disputes can have a heavy impact on livelihood and food security.

For many years, inefficient and informal justice systems meant that farmers, and particularly women, had no recourse to resolutions over even the most minor discord.

With the introduction in 1995 of the Uganda Land Alliance (ULA) – established to provide legal empowerment to rural communities through Land Rights Information Centres – fair land laws and policies, as well as swift access to justice, has become the norm, rather than the exception.

In Ecuador, an IDLO training programme on access to fair trade markets and the basic legal aspects of forming and running micro-enterprises has given local communities in predominantly rural areas significant leverage in tapping into new revenue streams.

And in Rwanda, where women held just 43 percent of seats in the lower parliament in 2003, a new constitution and the creation of women’s councils over the past decade pushed women’s political representation to 64 percent in 2013, resulting in stronger laws on violence against women and gender-based crimes.

Any number of similar examples, from Afghanistan to Kyrgyzstan to Kenya, stand as testimony to the sheer scope and significance of the rule of law for the global development agenda.

But while legal frameworks are vital to securing rights and enshrining the basic tenets of development in constitutions worldwide, they cannot and do not exist in a vacuum.

“Laws alone are not enough,” Khalid Malik, former director of the United Nations Development Programme’s (UNDP) Human Development Report noted during the panel discussion. “Many countries have all manner of statutes and conventions, but behaviors have not altered. If institutions are not pro-poor, change will not happen.”

He stressed that part of the problem lies in “institutions often being captured by the elites”, or other powerful interests, making them less accessible to marginalised groups.

What is needed, he says, is an approach to the rule of law that is rooted in justice, and the empowerment of ordinary people.

“When you have a universal approach to education and health,” he stated, “You empower people enormously. Think of the Arab Spring – it happened mostly in countries that were doing well on health and education. Why? Because once you’re educated, you become far more aware of your rights, you start expecting more from institutions, and the relationship between the citizen and the state starts to change.”

It is precisely this change that lawmakers hope to see as the U.N. finalizes its new development plans for a more just and sustainable world.