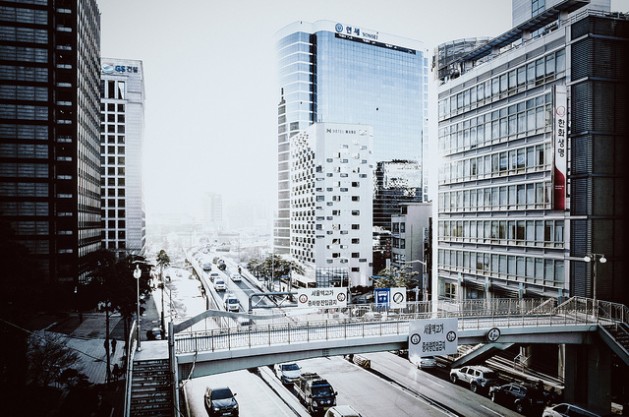 In the past two decades South Korea has made such vibrant progress that it now counts itself as one of the world’s leading economies. Credit: Anton Strogonoff/CC-BY-2.0

UNITED NATIONS, Aug 27 2015 (IPS) - Back in 1996, when South Korea voluntarily quit the 132-member Group of 77 (G77) – described as the largest single coalition of developing nations — it joined the 34-member Organisation for Economic Cooperation and Development (OECD), long known as the “rich man’s club” based in Paris.

As one of only three countries to leave the G77 for the OECD – the other two being Mexico and Chile – Korea elevated itself from the ranks of developing nations to the privileged industrial world.

Perhaps more significantly, Korea also swapped places at the negotiation table: from an aid recipient to a donor nation.

“To play a greater role in the global community and fulfill its responsibility as one of the important donors, Korea will continue to increase its ODA [official development assistance]." -- Ambassador Choong-Hee Hahn, South Korea’s deputy Permanent Representative to the United Nations
Since then, the Korean government has made a significant contribution to development aid, providing assistance to some 26 developing nations.

The countries have been singled out based on their income level, political situation, diplomatic relations with Korea, and economic cooperation potential.

“To play a greater role in the global community and fulfill its responsibility as one of the important donors, Korea will continue to increase its ODA,” the Korean envoy said.

U.N. Secretary-General Ban Ki-moon, a former foreign minister of South Korea, points out that the international community must make progress on the three pillars of United Nations engagement.

“Korea has unique lessons to share on all three pillars and can be an active catalyst in bringing the world together on these issues,” the U.N. chief said.

He said Korea evolved from a developing to a developed country within the span of a single generation, and successfully hosted the Group of 20 (G20) Summit in 2010.

“The international community is looking to Korea with high expectations,” said Ban praising his home country “for rising from a beneficiary to a donor.”

As it continues to enhance its international profile, Korea is now home to the Global Green Growth Institute and also host to the new secretariat of the Green Climate Fund.

Over the last 20 to 30 years, Korea has made such vibrant economic progress that it is now one of the world’s, if not Asia’s, leading economies, with global brand names such as Samsung, Hyundai, Kia, LG and Daewoo.

Asked about the secret of his country’s economic success, Ambassador Hahn told IPS Korea went through an unprecedented transformation from one of the least developed countries to a member of the OECD within a generation. Such economic success can be explained by several key factors.

He said this was achieved through the implementation of five-year economic development plans in the initial stage, even as Korea has made steady progress from the light industry to heavy industry, then to the service industry.

Second, human capital secured through quality education has been another major factor.

In sync with economic development, he pointed out, mandatory primary and secondary education was phased in.

“The strong will of the Korean people to educate also led to the establishment of high quality higher education infrastructure.”

Third, traits such as diligence, self-help, and cooperation contributed to the improvement in the ownership of the country’s development.

These elements, he said, can be seen as the key characteristics of the Korean rural development model, which continues to be a good role model for developing countries today.

Lastly, securing efficiency and accountability through the establishment of democratic and efficient governance led to successful poverty eradication and democratization.

“I believe inclusive institutions, rule of law, and a healthy civil society played a significant role in progressing towards a democratic and open society that is respectful of justice and human rights, considerate of the vulnerable, and that emphasizes human dignity.”

Asked if North and South Korea will one day join into a single union – as East and West Germany did decades ago – Ambassador Hahn said this year marks the 70th anniversary of the division of Korea.

“Based on the Trust-building Process on the Korean Peninsula, we currently make efforts to lay the ground for unification by further developing inter-Korea relations, building confidence and easing tensions in the Korean peninsula,” he declared.