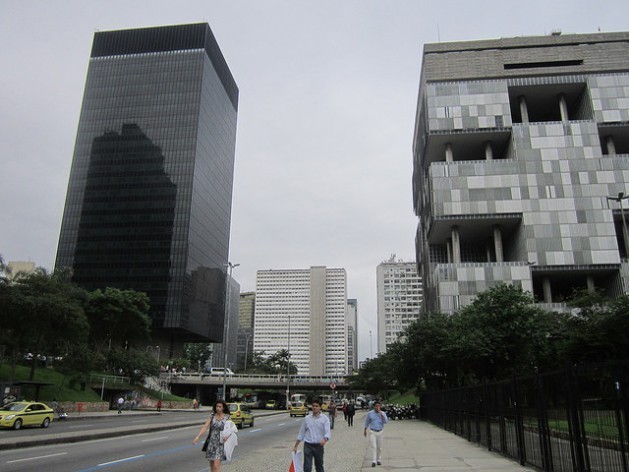 The BNDES building, left, is across the street from the headquarters of the state oil company Petrobras, overlooking the Avenida República do Chile in Rio de Janeiro. Credit: Mario Osava/IPS

RIO DE JANEIRO, Aug 8 2015 (IPS) - Brazil’s rush to build hydroelectric dams, refineries, railways, ports and other megaprojects since the last decade, not only at home but in other countries as well, has been fueled by the sheer volume of financing from its development bank.

The state development bank, BNDES, lent 187.8 billion reals (62.5 billion dollars) last year – more than one-third of which went towards infrastructure. For years the credits granted have broadly surpassed those of the World Bank, in terms of the annual totals.

Intelligence is needed to guide the direction of different sectors of the economy, nearly always obscured by the impressive sums, and it comes from the accumulated knowledge and know-how of the bank’s 2,881 employees, 85 percent of whom hold university degrees, and 11.4 percent of whom have graduate degrees.

“Since it was founded in 1952, the BNDES has been of strategic importance to Brazil,” economist Fernando Cardim de Carvalho, a retired Federal University of Rio de Janeiro professor, told IPS. “That hasn’t changed, in essence, and to some extent the bank is more important now than in the past.

“With the gradual dismantling of the state apparatus for planning and intervention since the end of the (1964-1985) military regime, the BNDES became the last of the Mohicans, the only institution left capable of formulating economic policies in the country, although in relatively restricted fields,” Cardim de Carvalho said.

The Planning Ministry “was reduced to exercising oversight and control over the implementation of budgets, and in the process of erosion that demolished Brazil’s public sector, only two organs survived in the economic arena: the BNDES and the Central Bank,” said Cardim.

But the bank, although “essential” for financing infrastructure works, is no longer able to cover investment needs in Brazil, which require additional financing mechanisms, he added.

Its operations depend on the government, “which formulates more general strategies,” he said. That led to “a big mistake, which is not the responsibility of the bank but of the governments that decided to use it as an instrument of anti-cyclical policy,” the economist lamented.

His criticism focuses on the acceleration of projects financed by national treasury funds transferred to the bank, to sustain economic growth after the global economic crisis that broke out in 2008. “The bank exists to promote long-term objectives, that transform the productive system, and imposing on it other functions and financial dependency on the national coffers is a mistake,” he argued.

For his part, Mauricio Dias David, who worked in the BNDES until 2009, blamed loans granted to “many incoherent projects and white elephants,” like football stadiums built or remodeled for the 2014 World Cup, on “financing facilities” left without control because they were considered anti-cyclical.

In the past, when it was small, the bank was “creative and had a critical capacity that was lost with its growth and growing bureaucracy,” according to Dias David, who is now a professor of economy at the Rio de Janeiro State University. “But without that critical eye, badly-designed projects are approved, whose costs and even insolvencies will blow up in our faces in the future,” he told IPS. 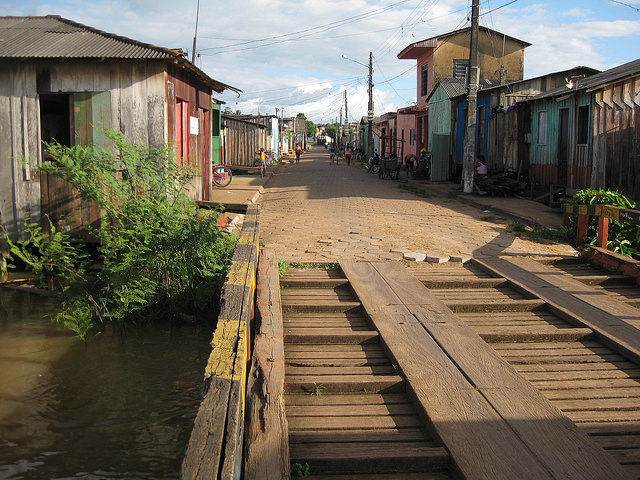 A poor neighbourhood in the city of Altamira in the northern state of Pará on the banks of the Xingú River, which will be flooded when the Belo Monte hydroelectric dam’s reservoir is filled. The Amazon jungle city will suffer the biggest impact from the megaproject financed by the BNDES. Credit: Mario Osava/IPS

In addition, the number of employees nearly doubled this century, and 35.8 percent are women. They are selected by means of public contests and they enjoy job stability.

The bank’s potential attracts graduates from the best universities, because it offers “the best job in a federal institution in Rio de Janeiro,” said BNDES presidential adviser Marcelo Miterhof.

The economist, who has worked for the BNDES for 13 years, said the employees gain know-how in the bank, in the analysis of projects and in communication with companies and people from different specialised areas.

“Our technicians don’t know more about specific areas, like energy or logistics, than specialised bodies or companies,” Miterhof told IPS. “But they gain a big picture, they systematise sectors, and they have the opportunity to learn about a lot of areas.”

There are also internal mechanisms, like seminars, discussion groups, or the “knowledge café” where experts from within or outside the bank speak on different issues, such as wind energy. The exchange of public employees with other government agencies also helps make the learning process continuous.

The bank’s employees and its “thinkers” are distributed in 20 areas, such as infrastructure, industry, foreign trade, and the environment, and the strategic planning and economic research departments.

The BNDES also publishes a quarterly magazine with articles from authors from within and outside the bank.

Miterhof clarifies that as a bank, the BNDES does not promote development on its own, but depends on the initiative and demands of its clients.

But sometimes it launches its own proposals, such as a programme to modernise the tax administration, which supports city governments in improving financial administration and citizen services.

The environmental dimension has gradually been incorporated into the bank’s activities. The BNDES started to work in cooperation with the environmental authorities in the 1970s. Later, a section was created “to support the assessment of internal bank projects and policies,” which was turned into a department in the 1990s and into an “area” in 2009.

Environmental issues thus have representatives in the committees that select loan requests and approve resolutions and guidelines, who join the representatives of other areas that dictate the way the bank is governed, the head of the Environment Department, José Guilherme Cardoso, told IPS.

After the 1992 United Nations Conference on Environment and Development, or Earth Summit, held in Rio de Janeiro, the bank stepped up its environmental actions. The BNDES manages, for example, the Amazon Fund, which finances projects in the rainforest and comes up with its own initiatives as well.

One example is the BNDES Ecological Restoration Programme, which channels funds into the recovery of vegetation in ecosystems such as the Mata Atlántica (Atlantic Forest along the east coast), the pampas in the south, and the central Cerrado savannah.

The environmental question has been extended to different departments and activities, like the Sustainability Committee and the Planning Area’s Socioenvironmental Management, thus cutting across all decision-making levels, from the selection of projects to be financed to the approval of resolutions on general guidelines.

The complexity of the inter-connnected issues has increasingly been recognised in the territorial development that the BNDES is trying to foment in the area of impact of the Belo Monte hydropower plant on the Xingú River in the Amazon jungle, involving the local population and governments.

It is an approach that seeks to overcome the serious conflicts generated by such a major infrastructure project as an 11,330-MW hydropower dam, one of the world’s biggest, in a poor region.

“The mobilisation of a well-organised civil society that participates intensely in the plenary meetings on the local development plan is impressive,” said Ana Maria Glória, of the BNDES planning area, which has taken part in the process with visits to the region.